My main worry while on our tour of Badami and surrounding places was how Samhith would react to seeing just sculptures and temples all day long. He had tired of temples after Aihole and Pattadakkal, but Badami was interesting because of the caves. Besides, the beautiful work on the rough stone, made over a thousand years ago seemed to excite him. However, by the time we had climbed up to the third cave, his enthusiasm was flagging, especially seeing all the other visiting children clambering all over (something I wouldn’t allow him to do!) I hoped there would be something in the third cave to keep him attentive, but I needn’t have worried! He was all agog, because, by now, he could identify some of the figures by himself, something which impressed our guide, and this made him feel extremely proud of himself! 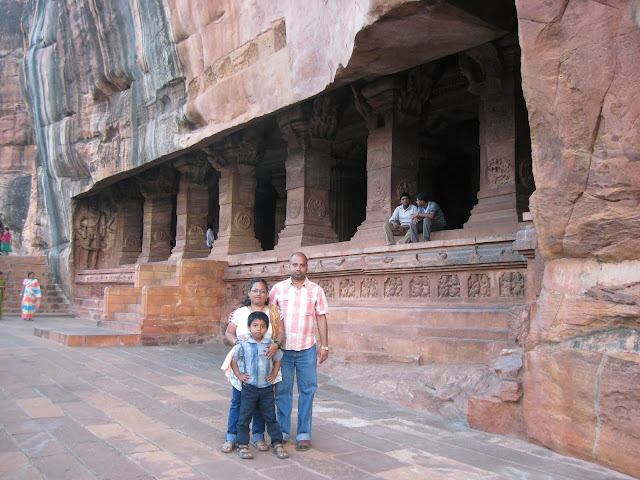 The third cave is also dedicated to Vishnu and is the most beautiful one with the most intricate of sculptures.

Varaha is seen again, his feet on the ocean bed, lifting Bhudevi with one hand. Here, she is not even touching the tusk, but seems to be supporting herself by holding his shoulder. Varaha seems to be a predominant figure here, since he was their main deity. Varaha figures even on the emblem of the Badami Chalukyas. (To read the story of Varaha, click here) 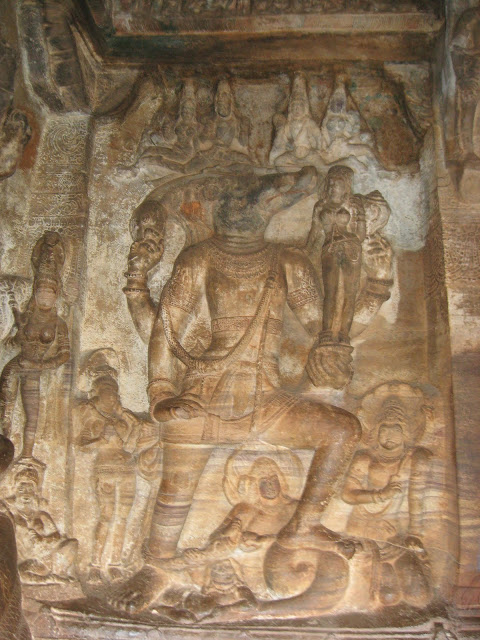 This figure of Vishnu shows him with all his weapons. We were told that this one might be a Vaishnavite door guardian. 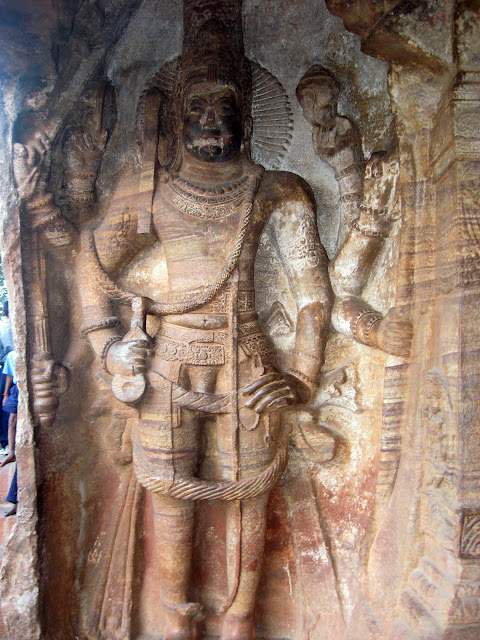 The next figure in this cave is yet another incarnation of Lord Vishnu – Narasimha. To read the story of Narasimha, click here. 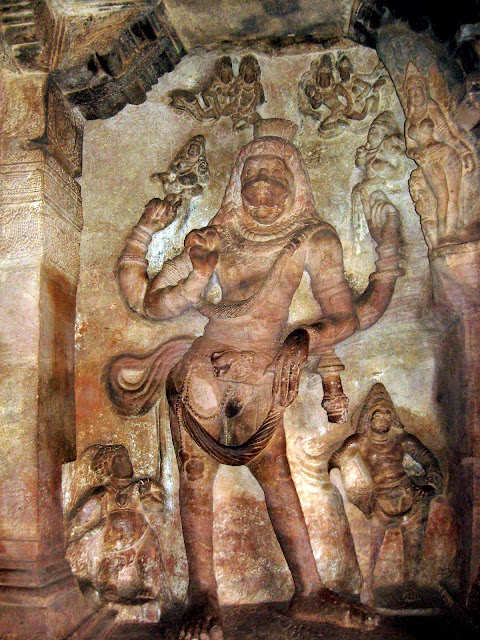 Interestingly, the figure of Narasimha is shown in a standing posture. He is usually depicted as seated, or more often than not, he is shown in an angry form, disemboweling Hiranyakashipu with his bare hands! Here, on the other hand, he actually appears to be smiling (by a stretch of my imagination at least!), and is depicted in a stylish way, leaning on a club (part of which has broken off). There are various figures around him, among which the one on the left appears to be Prahalada.

The next figure is another one of Harihara.Here, the details are somewhat clearer, in spite of the wear and tear of the rock on which the figure has been carved. The differences on the Shiva and Vishnu sides are more apparent here. 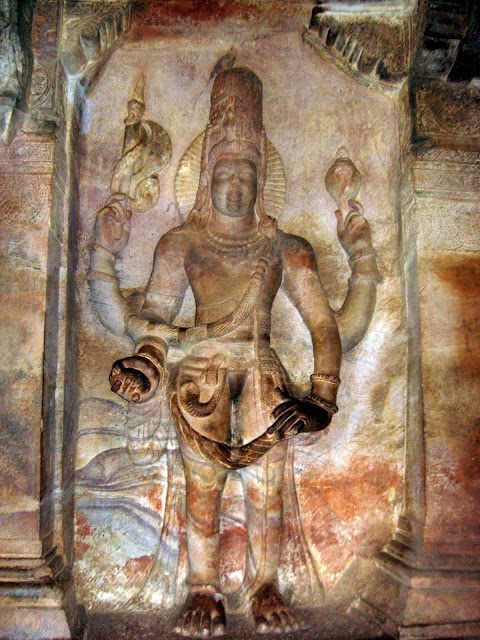 We now come to another figure of Trivirama  - Vamana.Again, the details are exquisite – see the story depicted at the bottom, though not much remains of the details on the side. To read the story of Vamana, click here. 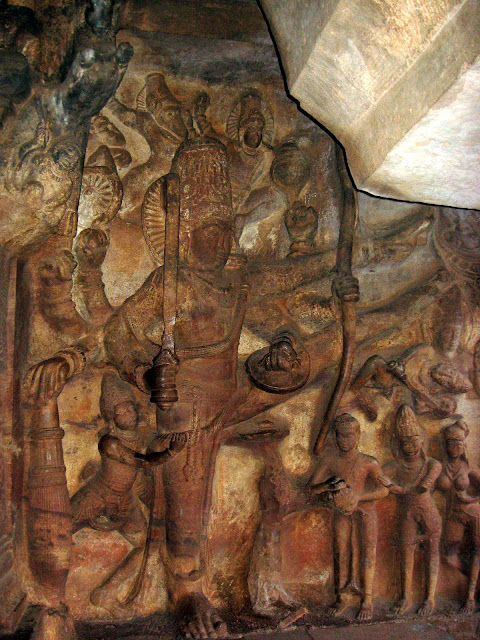 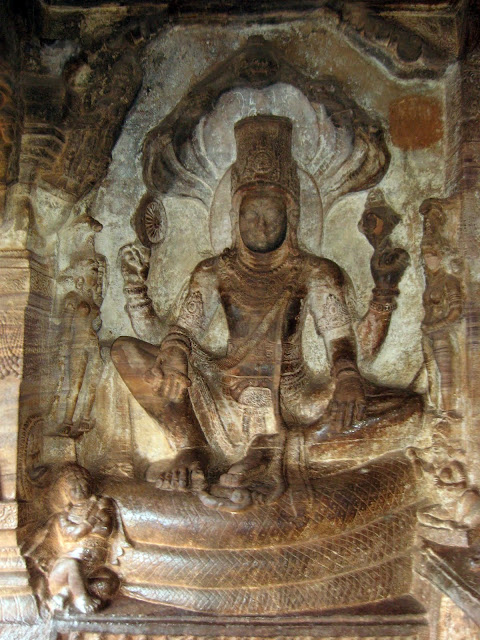 This cave was particularly overcrowded, but our guide bade us to wait for a while, saying that there was something we HAD to see. Once the children had moved, this is what we could see…… 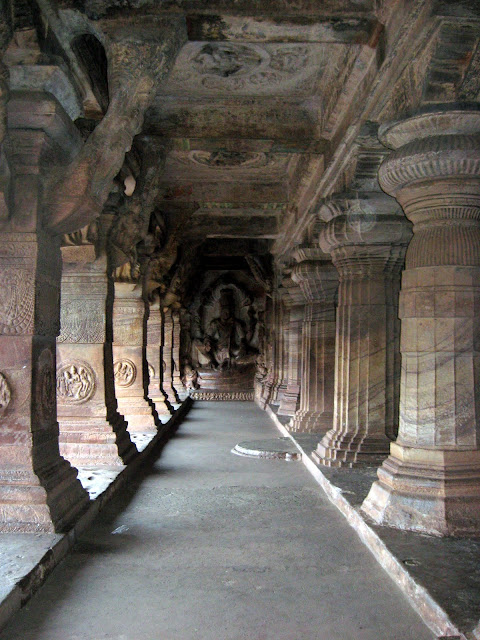 The long line of pillars in the hall seemed to flank the image of the Lord, and none of the other sculptures were visible. It is believed that this depicts the court of the Chalukya king, and the Lord is depicted in the same posture that the king is seen in, at court! Interesting, isn’t it?

This cave is special not just for these carvings, but for the amount of details on the pillars and ceilings…. Here is what we saw on the ceiling… 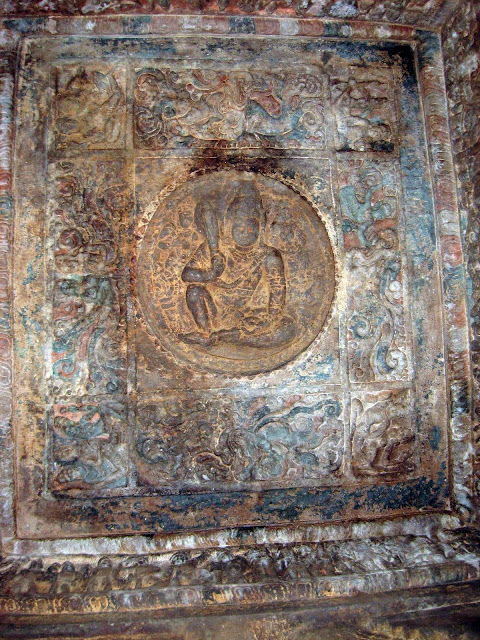 This shows Kubera – the God of wealth….

This one shows Indra, the king of the gods, riding his elephant – Airavata. He is surrounded by eight figures, who might be the ashta dikpalakas, or the guardians of the eight directions. 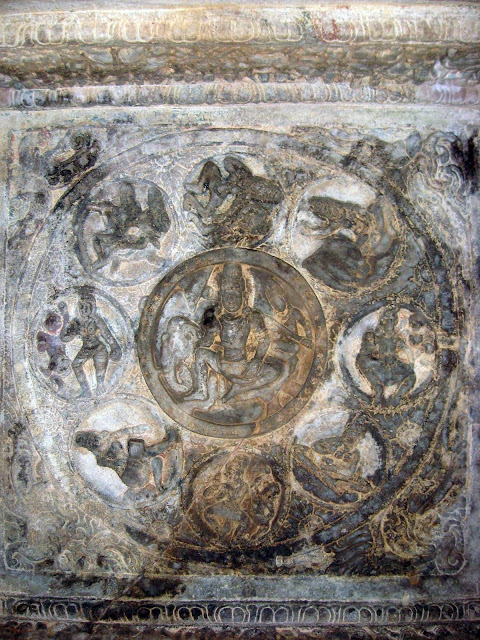 This one shows Shiva and Parvati riding the bull, surrounded by the Ganas… on the right are Ganesha and Karthikeya 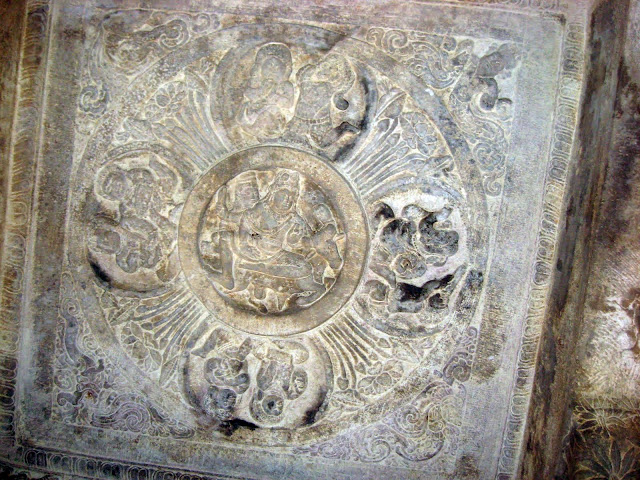 Even the brackets have been beautifully carved! Each one has a pair of yakshas (divine couples) in various postures and garments. Here are some of them. 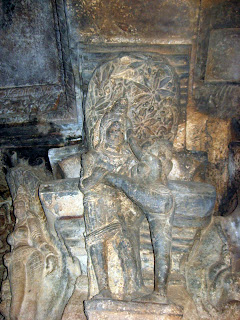 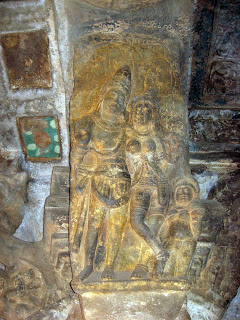 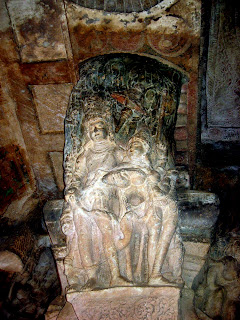 Interestingly, this cave would have once been covered with paintings. Today, we can barely see a trace of them, if you look close. Go over some of these photos and see if you can spot the colours!

The third cave is the last of those here dedicated to Hindu gods. The fourth and final cave is a Jaina cave, which you can look forward to seeing in my next post.