March 14, 2015
The Pemayangtse Monastery is the second stop on our tour of Pelling. It is one of the oldest monasteries in Sikkim, as well as one of the most important ones. From the outside, it looks colourful, but we have no clue about what awaits us inside! 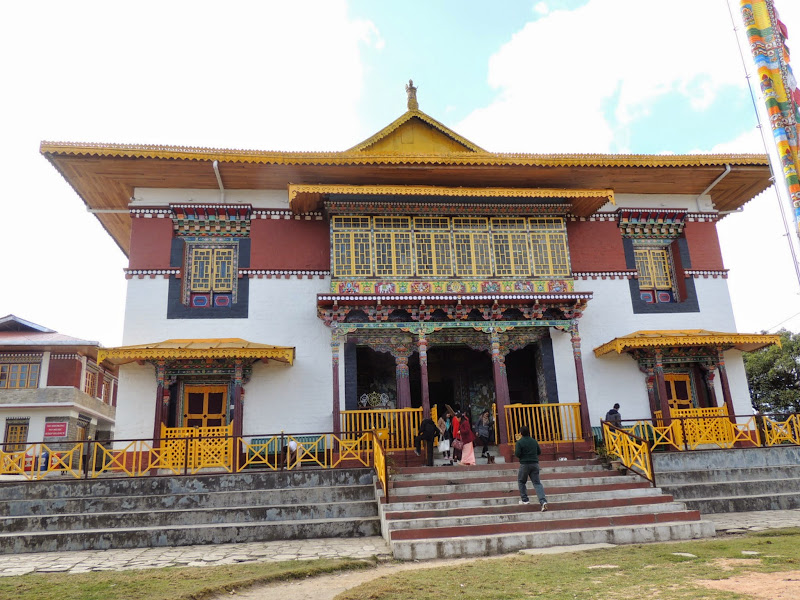 It is only when we reach, that we realize that we have already had a brief view of the monastery, from the ruins at Rabdentse. Later, standing at one of the windows, a priest points us towards the next hillock, and we have a clear view of the ruins. (For pic, see earlier post on Rabdentse)

Standing at the window, looking at the ruins, it seems obvious that the monastery and the palace are linked, and we learn that the monastery was first built in 1705, but enlarged during the reign of the third Chogyal – Chador Namgyal, the son of Tensung Namgyal, the king who shifted the capital to Rabdentse. He was a minor when he ascended the throne, and palace intrigue forced him to spend his childhood in Tibet, where he excelled in Buddhist and Tibetan Literature. Returning to his kingdom, he defeated the Bhutanese forces, and set about propagating Buddhism. He was eventually killed by his enemies, but not before he left his mark on his kingdom for centuries to come.

The monastery has been renovated a number of times, since the basic structure was originally made of wood, and succumbed to the weather as well as a couple of earthquakes. Much of it, however, has been well preserved. Shankar engages a young monk in conversation, and he takes us around, explaining the concepts in a mixture of broken Hindi and English. The language barrier is more than compensated with his gestures, and by the explicitly detailed sculptures and paintings.

The paintings on the outer walls show the effects of weathering, but these are the only ones we can click, for photography is prohibited inside.

The paintings on the interior walls, especially on the first floor, are remarkably well preserved, and, as we spot details resembling the Hindu Gods, we can’t but help exclaim aloud, and our guide shushes us, with an indulgent smile. A Ganesha painted in the Tibetan pattern stands alongside one of the guardian deities of Sikkim. A female deity reminds us of Kali, while figures and paintings of Padmasambhava seem to resemble some forms of Rudra or Shiva.

If we are excited by the paintings and depictions of the Tibetan deities, the next room has us speechless. It is a sort of library, a storehouse of documents, where ancient scrolls are preserved, and along with them, newer documents too, so that they can survive the centuries to come. Each scroll is carefully wrapped, and the cloth does more than just preserve it. It tells us of the age of the scroll, and also its importance. All of them are regularly taken out, to be read, for it is only then that the scroll preserves its sanctity! I am absolutely stunned, for this is the first time I have seen something of this scale, and, for the first time on the trip, bow down in all humility, feeling the divinity radiating here.

The second floor is even more impressive, for ancient wood still lines the floor here, and in the centre is a seven tiered painted wooden structure, depicting the concept of heaven. The detail is incredible, and my hands itch for my camera, but I contain my temptation. On this floor is also a sort of a museum, preserving some of the old memorabilia – pillars and sculptures from the original structure, masks and dresses of the traditional dances, and even utensils used for prayers as well as rituals.

We climb down the stairs, still awed by the experience, marveling at the faith, as well as the tenacity of the rulers and monks, in not just building something of this scale and intricacy, but also for preserving it for so many years. As we walk out, Shankar hands the monk some money, but he folds his hands in prayer, a serene smile on his face. As we leave, dropping the money into the donation box, it is clear to us, that it isn’t temples or places of worship which are preservers of faith, but it is faith which keeps them standing!