In Search of the Tiger, at Tadoba

June 05, 2015
“There are 65 Tigers in this forest” was how every guide began his introduction to the forests of Tadoba, or to give it its full name - the Tadoba Andhari Tiger Reserve. They knew most of the Tigers/ Tigresses by name, and were relatively sure of which ones could be seen, in which portions of the forest. We heard all about the amazing sights they had seen, of tigers of course, and the great deeds done by the heroes of the jungles; yes, tigers again. It was evident that the other animals were only secondary. This was, after all, a tiger reserve, and people came here to see tigers; us included. This focus on tigers, and the single minded dedication to spot them, led to some amusing, as well as some not-so-amusing moments during our three day stay at Tadoba… but I am getting ahead of the story, so join me as I re-live our jaunts through the jungle, in search of the tiger! 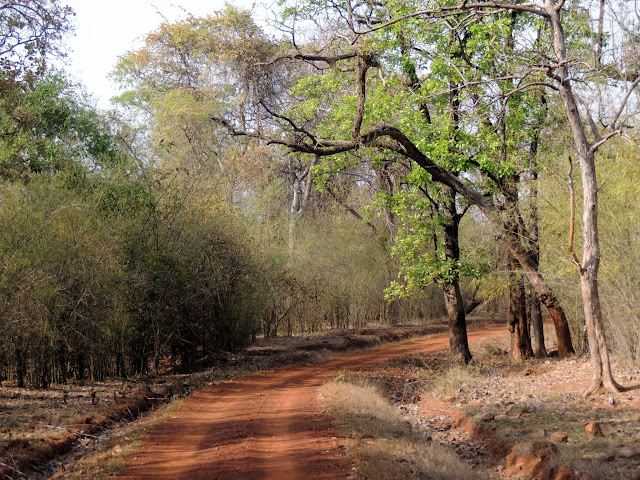 In every jungle we have been to, the deer are the easiest to see. It was the same here. Spotted deer halted by the side the road, pausing in their breakfast to stare at us; Sambhar stopped their endeavors to reach the higher leaves, ready to slip into the thicket at the slightest sign of danger; a barking deer didn’t even wait for that sign; it simply disappeared into the bushes the moment it saw us. 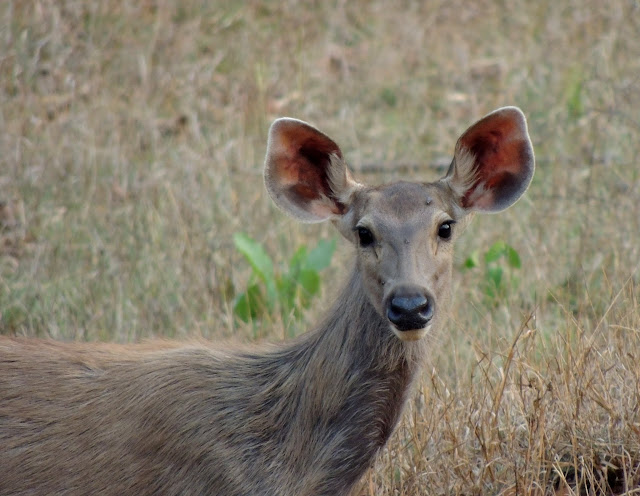 Their behavior in a herd was just the same – a tinge of curiosity, tempered by a huge dose of wariness, combined with the readiness to disappear! It was as if the mother deer had warned the young ones “Quiet, here they come, as usual. Be careful. Don’t cross the road till they are here. Stay close to the bushes. Keep your eye on them. If they make the slightest move, run!” 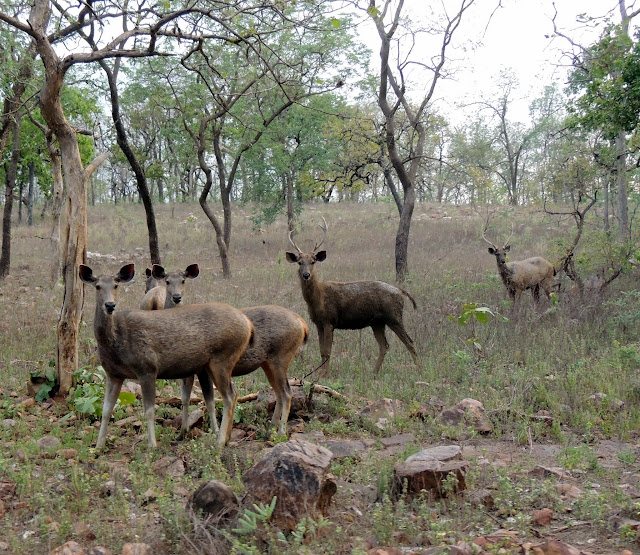 The same could be said of a Sloth Bear, which we startled when we took a less used path. It was difficult to decide who was more surprised – the bear, or us. We simply seemed to stare at each other for a long moment before realizing what we saw. The bear of course, was quicker than us, and in the blink of an eye, it disappeared into the trees! Of course, I didn’t manage to get a photograph L

The Indian Gaur was a lot more confident, probably because of its size. Even single ones simply looked up, gave us a hard stare, and went about their work, while those in a herd simply didn’t bother! 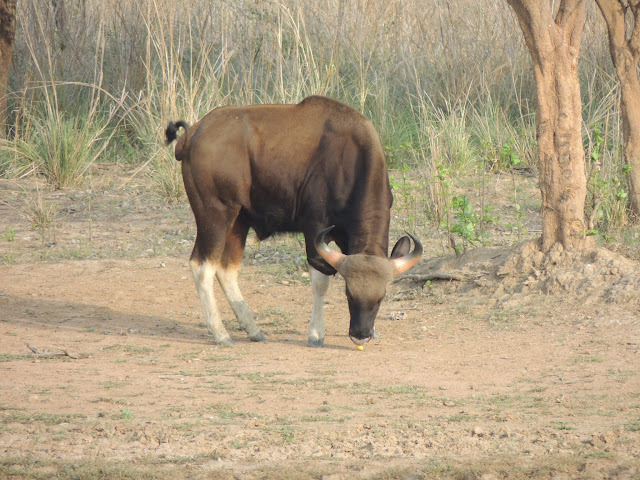 A pack of wild dogs were among the few animals who didn’t bother much about us, not reducing their speed as they crossed the road, even as we watched, from a distance, as they disappeared into the forest. 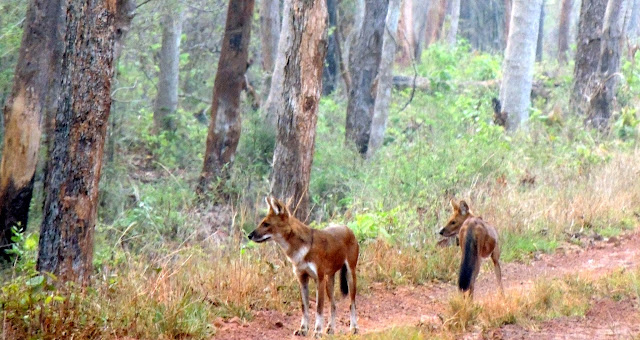 The Hanuman Langurs, were of course, least bothered by us. They probably couldn’t care less, and sometimes, as we had seen once before at Satpura, just sat by the road, tail extended, not even bothered to move to let our jeep pass by! 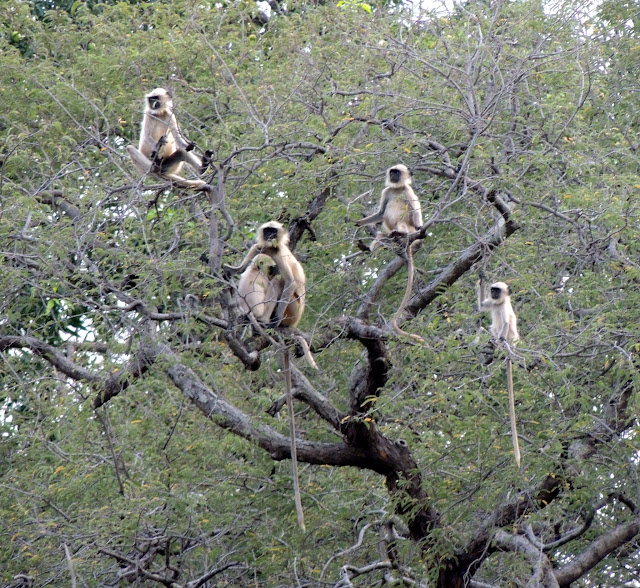 Among the smaller animals, a mongoose paused to look at us, as it crossed the road and escaped into the relative security of the bushes... 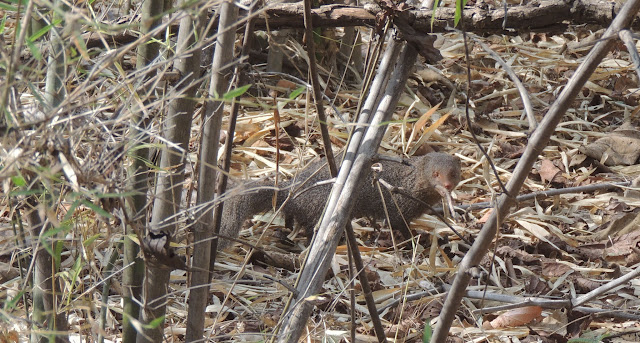 The birds were another story altogether. They went about their work as if we weren’t even there. An Asian Paradise Flycatcher was busy flying amidst the trees, and it was only when I insisted that our driver stopped. He probably couldn’t believe that I would want to stop for a bird when there was a tiger around!!! The bird itself, couldn’t care less about me or my interest. It proved remarkably difficult to photograph, but I persisted, much to the irritation of our guide, and, eventually, succeeded!!!

In sharp contrast was this Crested Serpent Eagle, which perched on this branch so stoically that it took me ten minutes to spot. It was only after another ten minutes of some furious clicking that we realized it had no intention to move.

Then, it was a battle of patience, which we lost, as even almost an hour later, the bird sat just as still, while other birds came and went. We, on the other hand, couldn’t wait any more for the tiger to turn up, and gave up our wait!

Another stoic bird was the Changeable Hawk Eagle, which simply sat on a branch on the side of the road, absolutely still, but for the movement of its head, obviously aware of its surroundings, alert to every happening around.

Then, there were the varieties of birds we saw at the watering holes, small and big ones, only interested in one thing – the insects or creatures they could find in the half dry mud…

At one such watering hole, what fascinated us most weren’t the herd of deer and horde of monkeys drinking water, but instead, these flies, millions of which seemed to descend on us, the moment we stopped! They didn’t really bite, but they were so irritating, that we decided even the tiger wasn’t worth the wait, with them for company!

There were a lot more such moments, not all of which we managed to capture on camera. Such as a flock of peacocks flying from tree to tree when the weather changed, and it began to rain; or the fight we witnessed, between an eagle and a hawk, probably over a nest. Then, there were all the Golden Orioles and Black Hooded Orioles flying around, their bright colour a quick flash against the sober jungle tones, yet so well camouflaged once they alit on a branch; or the water birds we didn’t expect to see, such as the Lesser Whistling Ducks, Ibises, coots, and many others I didn’t get a good look at….

Or this Racket tailed Drongo, of whom we only saw a silhouette…

It was evident that the forest was teeming with life, and there was so much to see. However, what of the animal we all wanted to see? The one we had come all this way for, and that our guides had insisted, we were sure to spot?

The reactions of our guides and drivers, as the tiger remained elusive, was an amusing sight by itself. Their attempts to show us the pride of the jungle, and of course, gain a baksheesh,  went from amusing to irritating as time passed by. Did they succeed and did we see a tiger? Wait for my next post to find out!!

Just by chance, this post goes live on World Environment Day. It wasn't intended, but as it has worked out so, let me take this opportunity to reiterate that while I appreciate and understand the desire we all have to see a tiger in the wild, let us not forget that it isnt the only resident of the forest. There is so much more to see, and all we need to do is keep our eyes and ears open. There is so much happening, which we ignore in our rush to see the big animals. This post is about just such experiences, those small encounters that are just as memorable as the big ones.

The next time you visit a sanctuary, keep in mind, that it is the balance between all the species which make the jungle their home, which keeps the tiger alive and well. Give them too, the importance they deserve, and your jungle experience will only be enriched.

This is the second post in my series on my #summertrip 2015, and I hope to take you along with me as I recount stories from my month long trip, which took me across the country. To get an idea of all the places I visited, and what you can hope to read about, click here.