- Some Thoughts and Information

You have read about all the animals and birds we saw at Tadoba, and our trysts with the tigers. Most of you have been asking for information about booking of safaris and accommodation. I chose to keep the earlier posts free of information, and just about my experiences, so here is one final, detailed post before I end the Tadoba series, with a few of my thoughts and some information which may help you plan your own trip. So, Read on..... 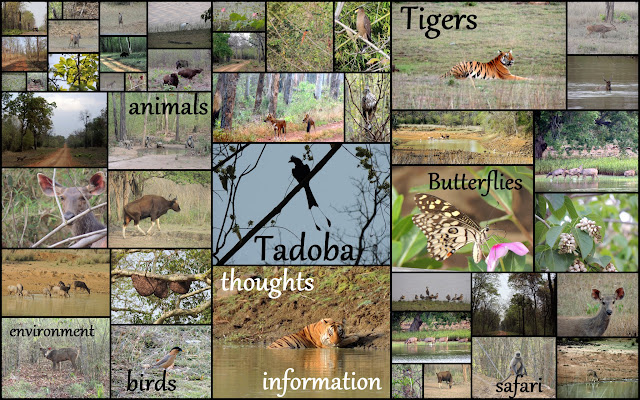 Driving from Nagpur towards Tadoba, I was struck by how few fields there were. It was the end of April, and the scorching sun was a reminder of the harsh summer. The heat only increased as we approached the coal fields of Chandrapur, and we stared aghast, as our driver informed us that the hills we saw weren’t natural ones, but had been the earth which had piled up when the mines had been dug. We weren’t allowed anywhere near the mines themselves, but the size of the hills (or should I say ‘mountains’?) were a clear indication of just how deep they went. As for the people who worked there, I could only imagine their plight considering how hot we felt, despite the comfort of our car, and the distance from the mines! It was a sobering thought, reminding us of the price we pay for electricity, and comforts we so take for granted.

It seemed somehow ironical that Chandrapur is also home to Tadoba, Maharashtra’s oldest and largest National Park. That it is a Tiger Reserve, and boasts of 65 tigers in all, only made me wonder at how it would have been, before man discovered the presence of coal, limestone and manganese here!

Of course, the tigers had been threatened long before the industries came. These were once the hunting grounds of kings, who ensured that their walls and homes were filled with trophies, and cared little for what was left behind in the forest. Man-Animal conflict was evident even before that, from ancient times when a local chieftain fought a tiger to save his people. He is considered a deity, and a temple dedicated to him deep inside the jungle is still visited by locals. It is his name, Taru, modified over the centuries to Tadoba, which gives the sanctuary its name.

Considering this rampant mining and industrialization, as well as all the other environmental threats posed, it was a surprise to see just how alive the forest was. Over the three days we spent there, we not only spotted many animals and birds, we also saw tigers, and discovered a heritage aspect of the forest too, not to mention its sheer natural beauty.

The Maharashtra Forest Department is obviously making an effort to keep the forest safe, while at the same time, ensuring revenue through tourism. They have opened online booking of safaris, as well as forest guest houses, canters (open buses) are also available for safaris (but only on the main roads. They can’t enter the narrower paths). The forest itself is well maintained, as are the paths and the fire breaks. Most of the villages inside the core zone have been relocated, and only a few still remain.

While these efforts are to be appreciated, there is much that needs to be done. There are a few things that struck out, in just the three short days we spent there.

While these are issues concerning the forest itself, there are other issues facing the tourist.

Finally, the answer to the question most of you have been asking – where we stayed, how we booked, and of course, the costs!

Other Posts on Tadoba: