Our Trysts with the Tigers at Tadoba - Part 2

June 10, 2015
Our first encounter with the Tiger at Tadoba came after a long wait, but it was a memorable one. Read all about it here before you read on.

Our hopes were high the next day, but the clouds continued to hover, and the tigers remained hidden. Once again, we alternately rushed through different parts of the jungle, and waited at water holes and ponds. No tiger appeared. Drivers we passed had suggestions, but none had sighted one yet. Our guide decided to make a second round of the water holes, and at one, we found a crowd. A tiger had appeared, but it had remained within the grass, and was fast asleep.

We wondered at the sense and logic of simply waiting for the tiger to awake, and probably disturbing it with all the noise that would be the inevitable result of multiple jeeploads of people waiting. But our driver and guide were hopeful. We should wait, they insisted, and we obeyed. The flies were especially irksome, and I found myself wondering if the tiger was indeed still hidden within the grass, or if it had moved away stealthily. Our guide borrowed my camera, and, zooming in, showed me what appeared to be a slight glimpse of orange amidst the yellow and green of the grass. The tiger was still here, he insisted, and we settled down to wait.

It seemed to take forever, but it was probably just over half an hour. A slight movement in the grass, and the tiger rose. He moved languidly into the open, walking towards the lake. 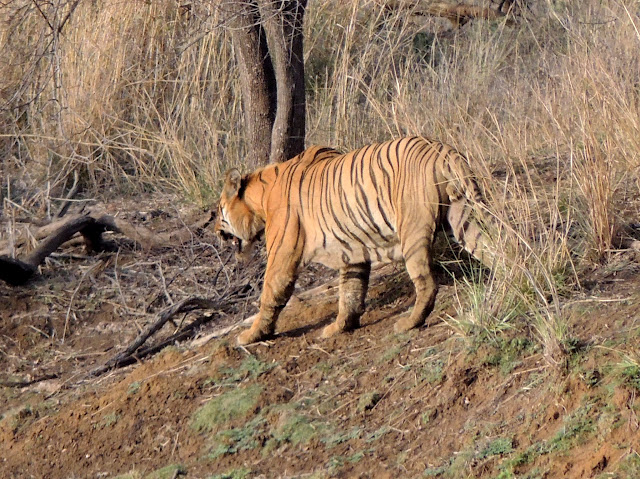 He first drank his fill, and moved further, settling into the water. 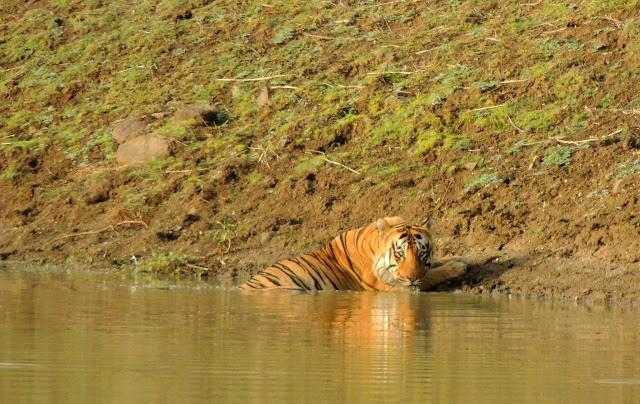 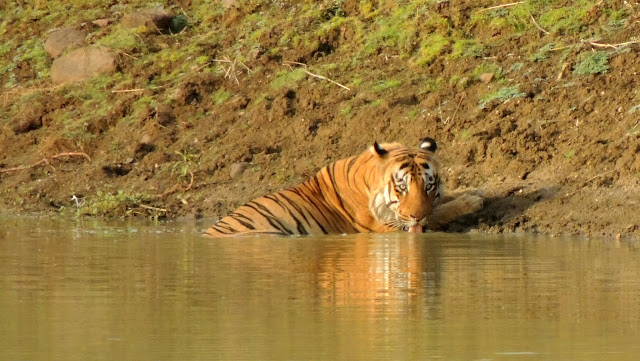 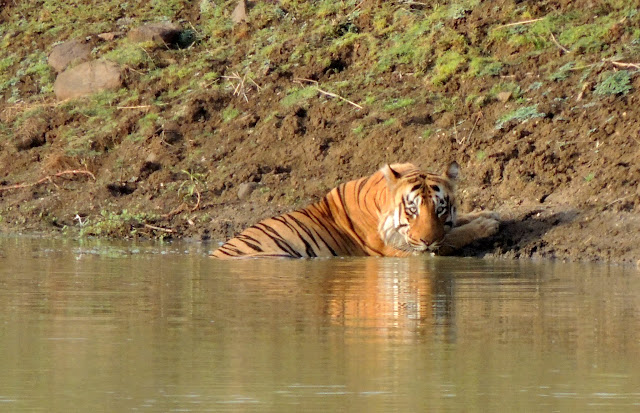 He sipped now and then, taking in the surroundings, and obviously the multitudes of people furiously clicking away with all the cameras they had! 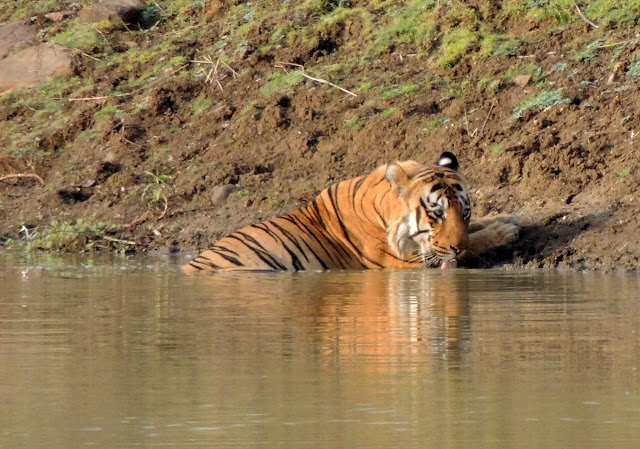 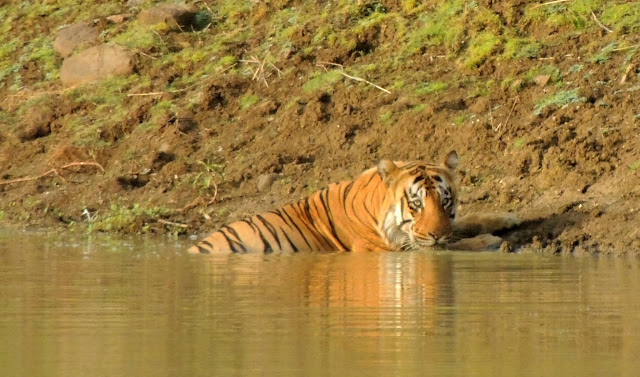 He seemed to enjoy sitting in the water, and probably would have sat there longer. Something however, seemed to disturb him, for he suddenly looked around, at the other side of the lake. 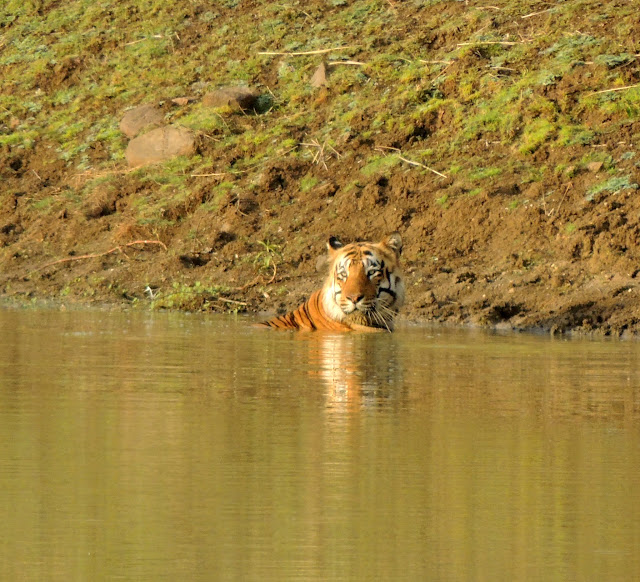 At first, we didn’t see anything. Then, an Indian Gaur appeared between the trees, heading straight to the lake. A pair of Cattle Egrets preceded him, as if they were his heralds. 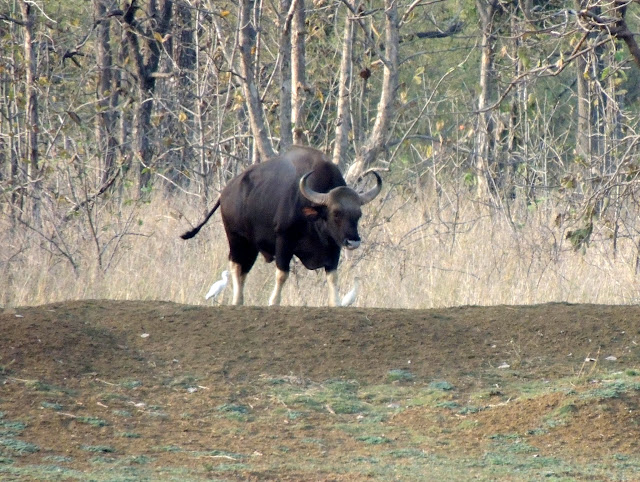 What would the tiger do? Would we see a confrontation? Or would predator and prey drink water together? 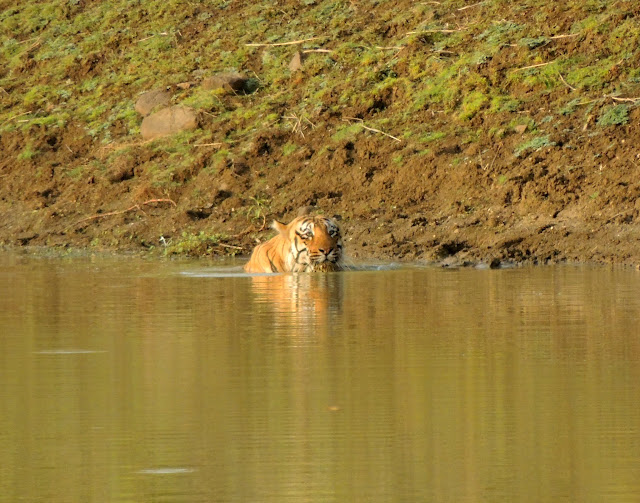 Even as we wondered, the tiger made up his mind. He simply took one look at the new arrival, and began walking out of the water. 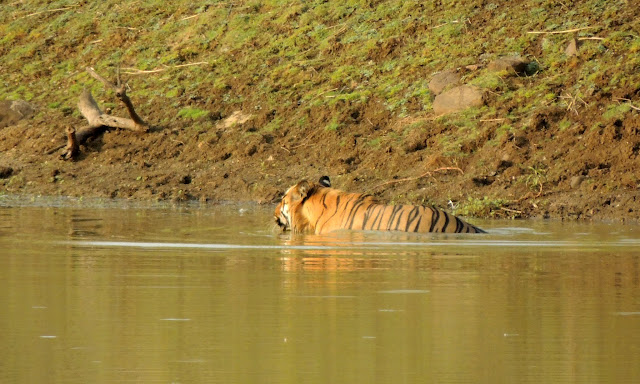 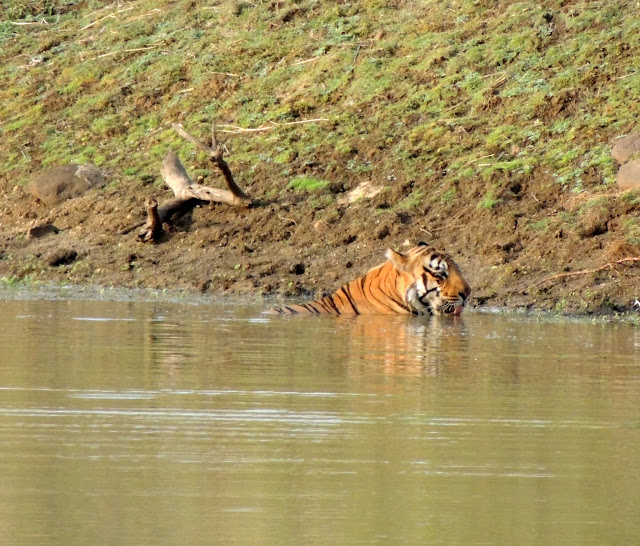 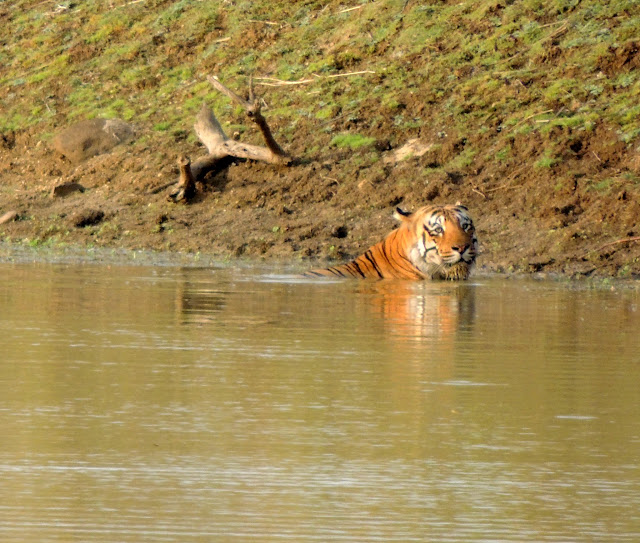 Without a backward glance, he walked straight out of the lake, and into the grass, and disappeared, not to sleep this time, but go off elsewhere. 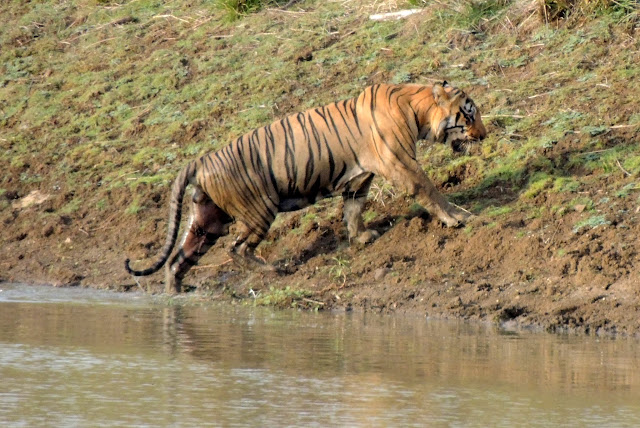 The gaur simply walked to the lake, had his fill, and walked off too.

It happened within a matter of moments, and the collective breath released was audible. Everyone had obviously held their breath, hoping, probably wishing, for a confrontation, or at least a photogenic moment, but it was an anticlimax.

“Which tiger was this?” I asked our guide, and he replied “Namdev. He is one of the older tigers here.”

“How appropriate!”, was my first thought … It was a wise tiger indeed, one named for a saint, who knew when to back off.

“But then, all animals are wise!” was my next thought. They don’t attack for anything else but food or fear, they don’t take more than they need. Above all, they know when to avoid confrontation.

"How different they are from us", was the next thought that entered, unbidden, into my mind. We invade their territory, and with a complete lack of respect, continue to disturb them, all for a thrill, or the prospect of a photograph to show off. They tolerate us, and leave us alone. Yet, when they emerge into our lands in search of food, we are the first to kill and maim. They live in harmony together, preys and predators alike, each fulfilling their part in the food chain, keeping the jungle and each other, alive. While we, even without such basic enmities, continue to fight in the name of issues we have created ourselves.

We call them ‘wild’, but are they? Or is it we who actually are?


This is the third post in my series on my #summertrip 2015, and I hope to take you along with me as I recount stories from my month long trip, which took me across the country. To get an idea of all the places I visited, and what you can hope to read about, click here.