Around Gwalior - The Majestic Palace at Datia

August 26, 2016
“Datia mein aap kya dekhenge? Wahan dekhne layak kuch bhi nahin hai” (What will you see in Datia? There is nothing to see there). That was our driver, and it was a refrain we had heard often. Ignoring him was easy. Finding our way to the palace at Datia, was not. 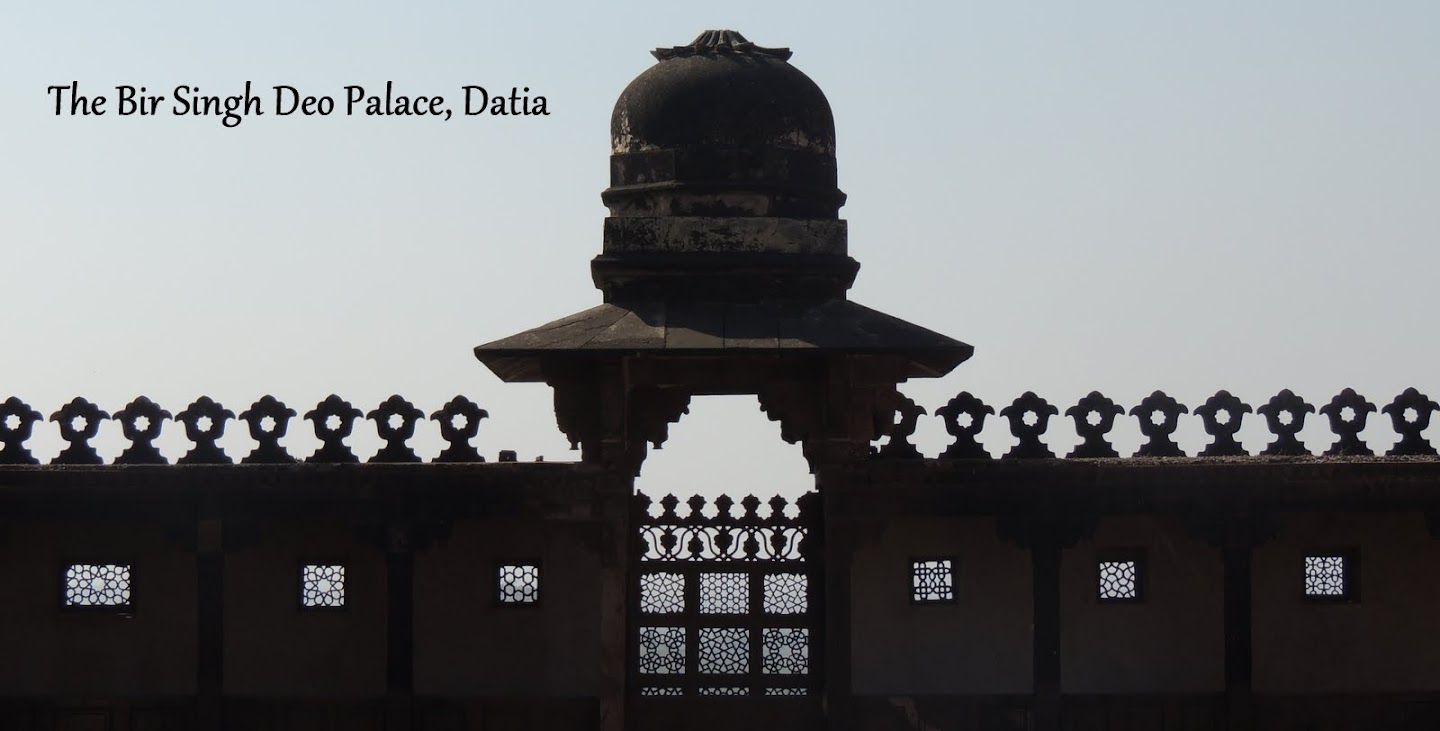 Asking for directions to the palace, we were met by blank stares, and then reluctantly given directions, with the warning “Wahan kuch nahin hai, aur aap andar bhi nahin jaa sakte” (There is nothing there, and anyway, you won’t be allowed in). Braving all this discouragement, we pressed on, only to arrive at a fort, with a board saying “No Entry.” For a minute it looked like we were either lost, or there truly was nothing I could see here. Thankfully, luck finally smiled on us, and brought out an old man, who directed us to the palace. “You should have asked for the Mahal”, he gently corrected us. That set us off again, on our quest. We soon found ourselves amidst narrow lanes, competing for space with cows, women washing clothes, and children playing, and wondered if this path actually led somewhere. Then, suddenly, we were out in a clearing, and there, looming over us, was the magnificent Bir Singh Deo Palace of Datia. 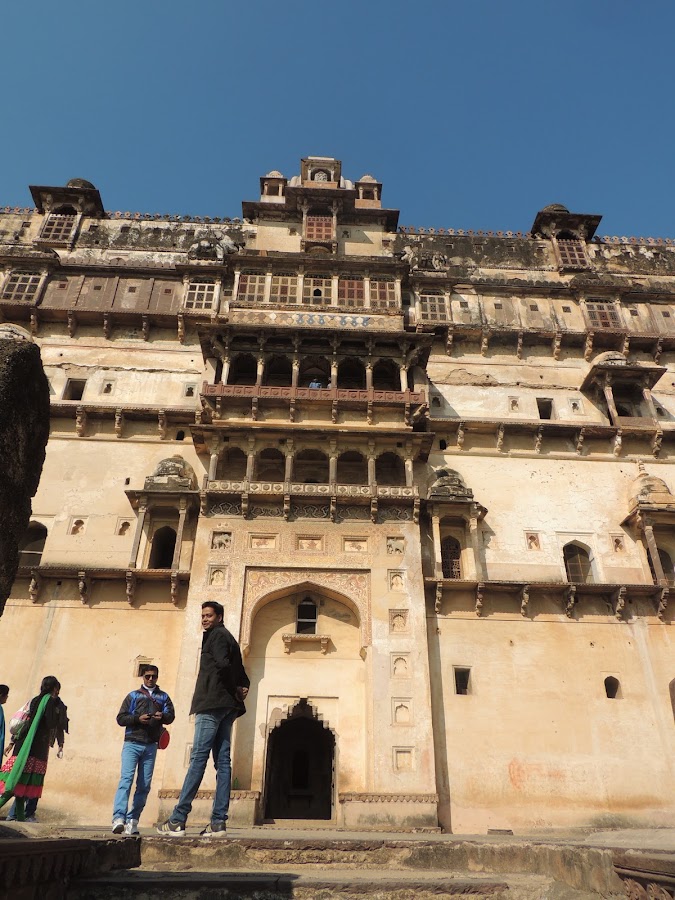 Bir Singh Deo (1602-1628) of Orccha was a contemporary of Jehangir. He was one of Jehangir’s staunchest supporters during the prince’s revolt against his father, and he was well rewarded when Jehangir eventually rose to power. It is said that Bir Singh Deo built 52 monuments in all, during his lifetime. Among them were palaces he built in anticipation of Jehangir’s visit, and the palace at Datia is one of them. The grandeur of the palace is a standing testimony to the regard Bir Singh Deo had, for his Emperor.

The Datia palace is built on a granite ridge overlooking the town. The architecture is a combination of Rajput and Islamic styles, a clear influence of the relations between the Mughal Emperor and the Bundela king. This is emphasised by the use of red sandstone, which was considered the imperial stone.  The seven storeyed structure towers over the town, and is considered one of the best examples of Rajput architecture of the period. 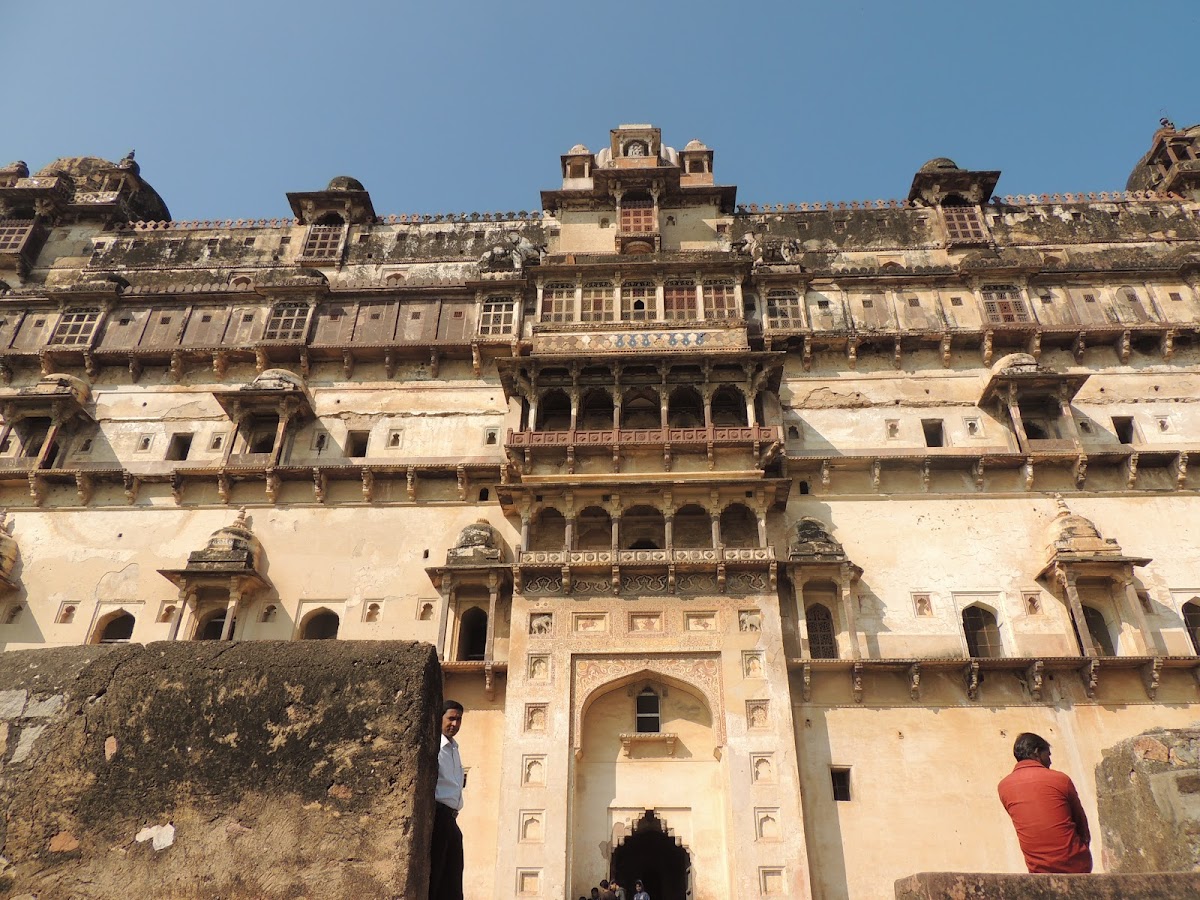 The synthesis of Rajput and Islamic aesthetics is visible right at the entrance. 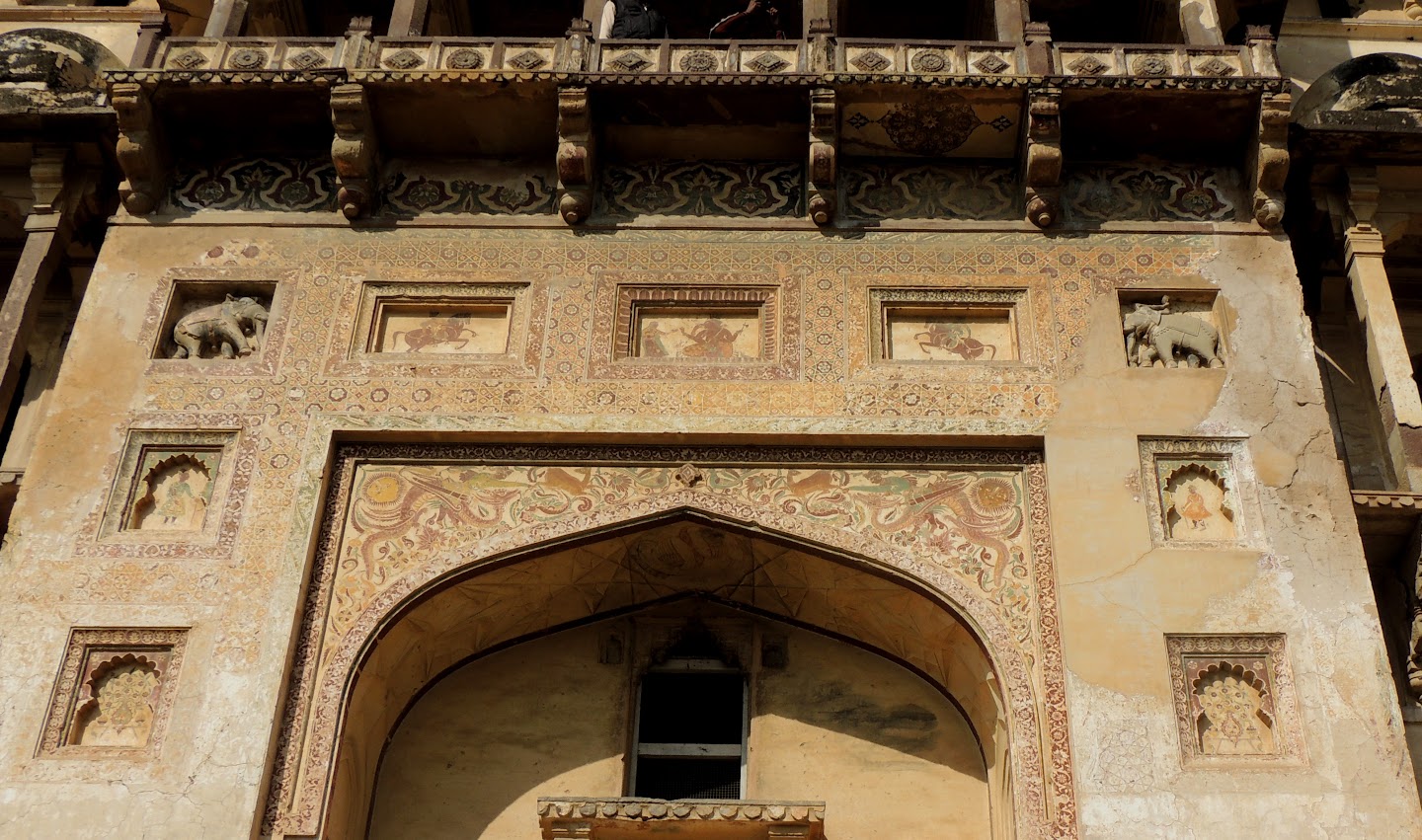 Over the arched entrance so typical of Islamic Architecture, is painted Ganesha, the remover of obstacles in Hindu thought. 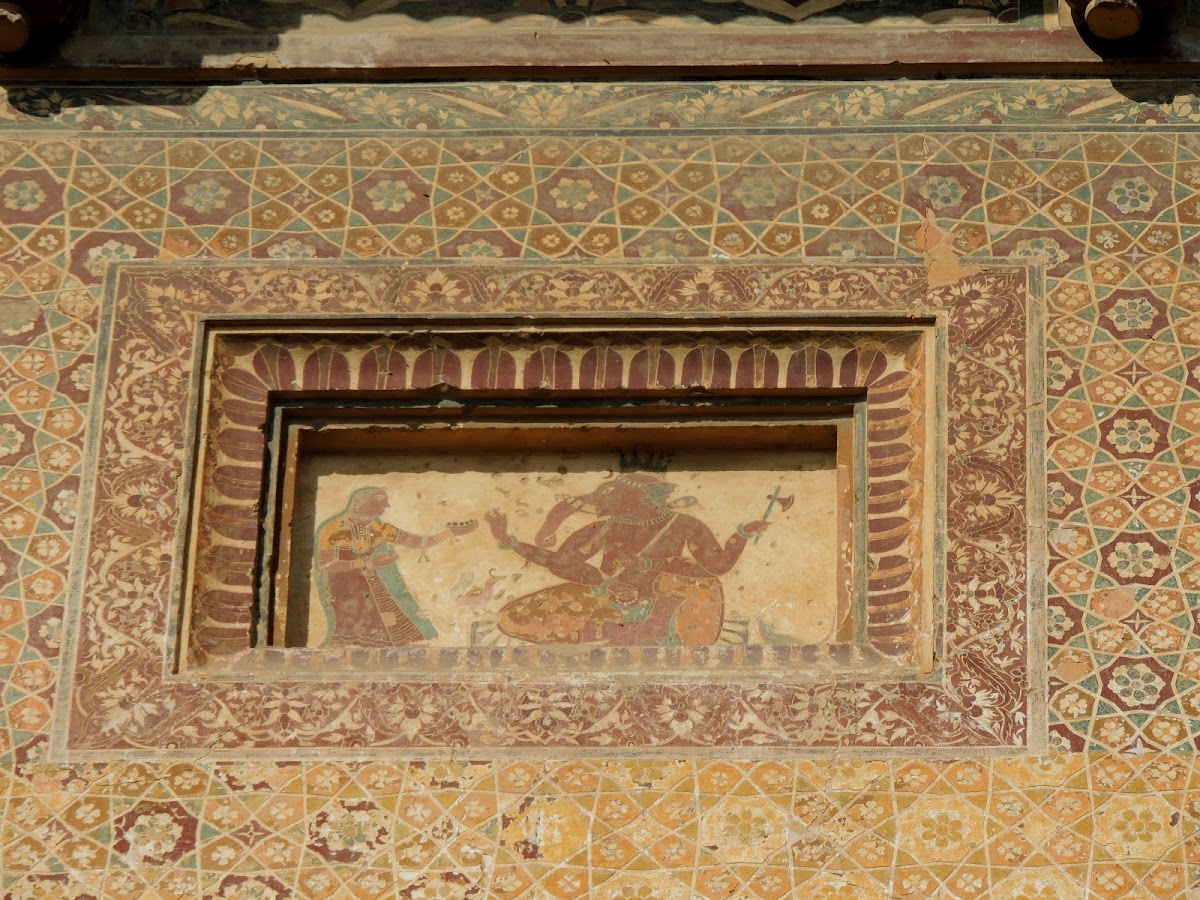 Below Ganesha, painted on the side of the arch, is a warrior, complete with sword, riding a dragon, chasing a deer, in the forest.

Incidentally, having closely followed Sudha’s trip toUzbekistan, this panel immediately reminded me of the Sher Dor of the RegistanSquare Complex, where the sun rises behind a tiger chasing a deer. See her pic below…

Don’t you think they are eerily similar? Could this be a representation of the same motif, albeit modified to suit local sensibilities?

Getting back to our monument, the lower levels were built for those who would accompany the Emperor. These would have been the public areas of the palace as well.

The upper levels are situated amidst courtyards, which our guide explained were in a Swastika pattern.

The private rooms of the palace, which would have housed the King’s quarters, along with his durbar hall rise from this central structure, and are capped by ribbed domes, which would once have been covered by intricate tiled work. Today, only patches of these tiles remain, and work is on to maintain what remains, and restore what is possible. 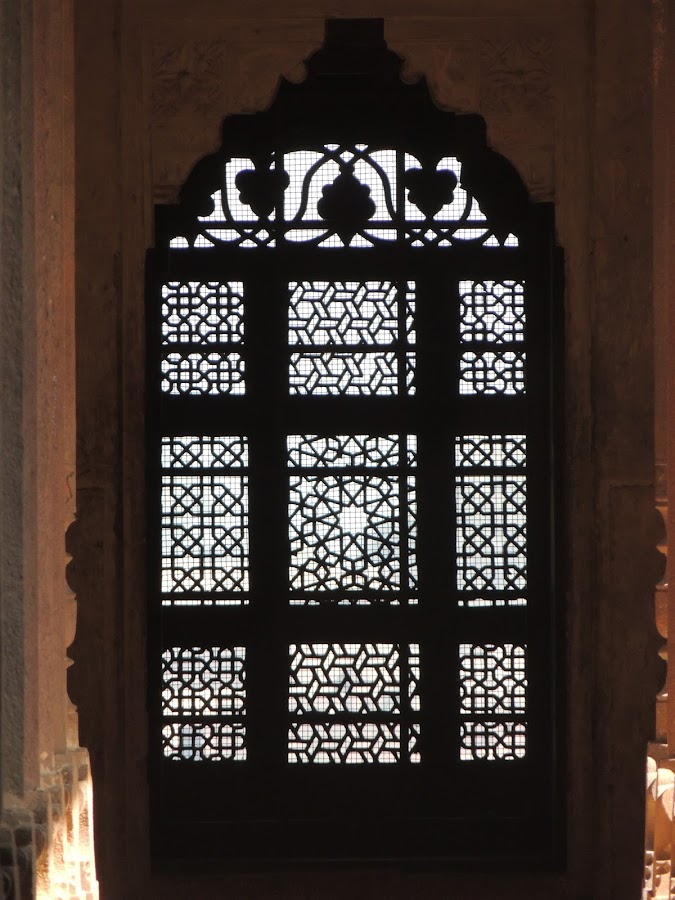 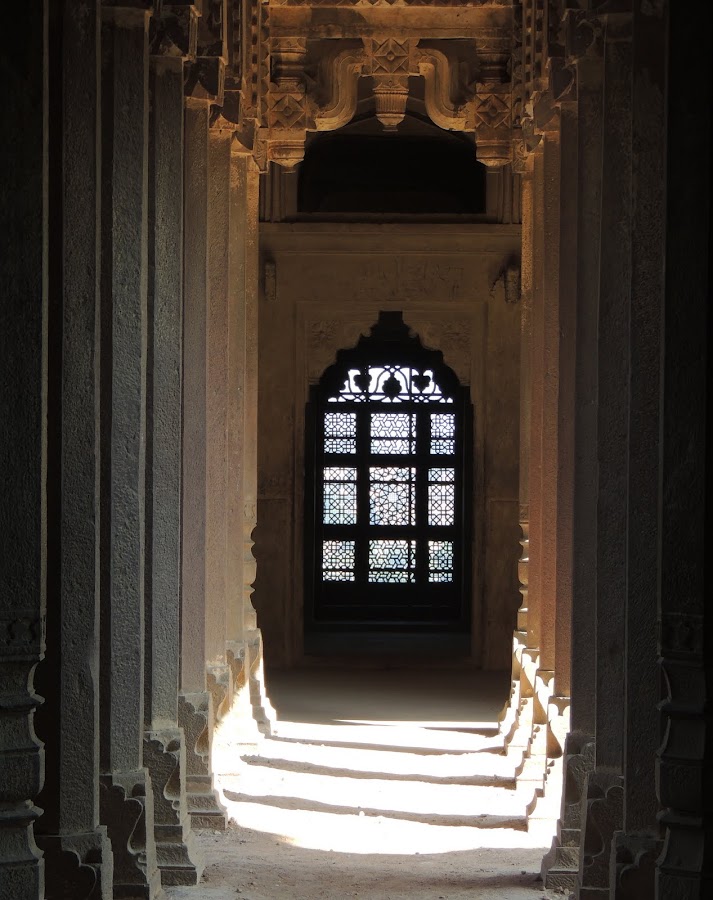 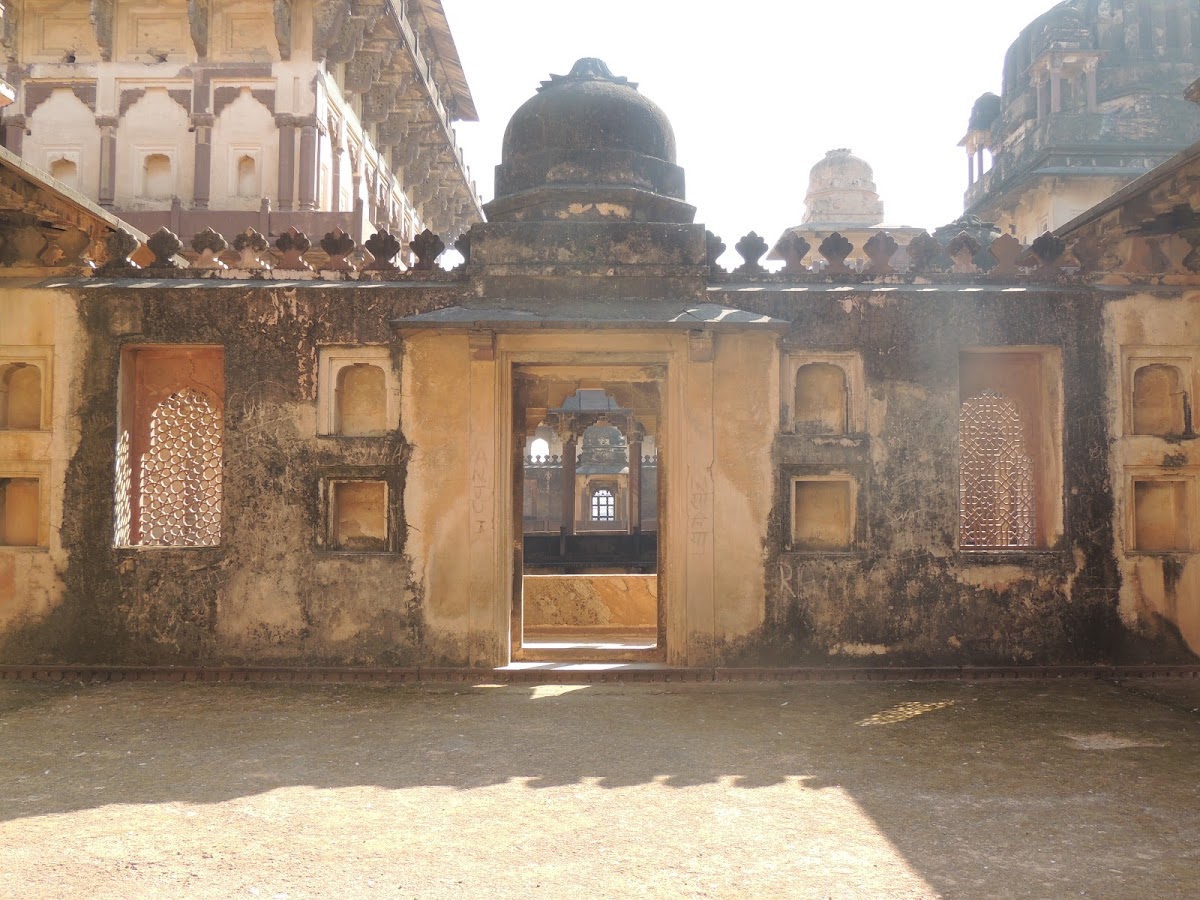 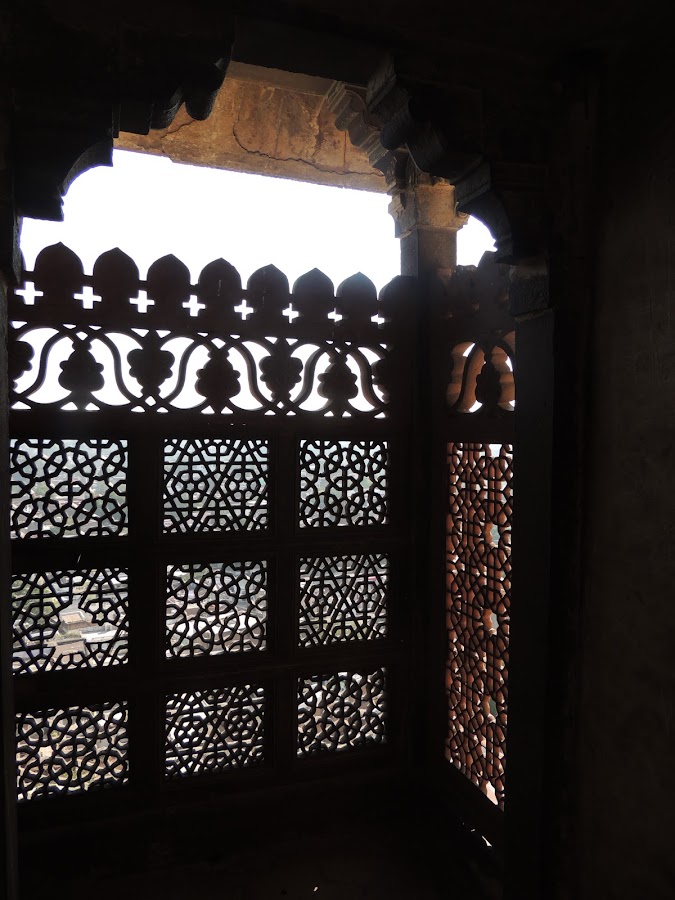 The interiors of the palace would have once been covered in paintings, including the areas of the balconies and the passages. Today, only a few of these remain, and have been cordoned off, in fear of further damage. We had to peep through either small windows or through gaps in the door to see these, despite the caretaker being with us! 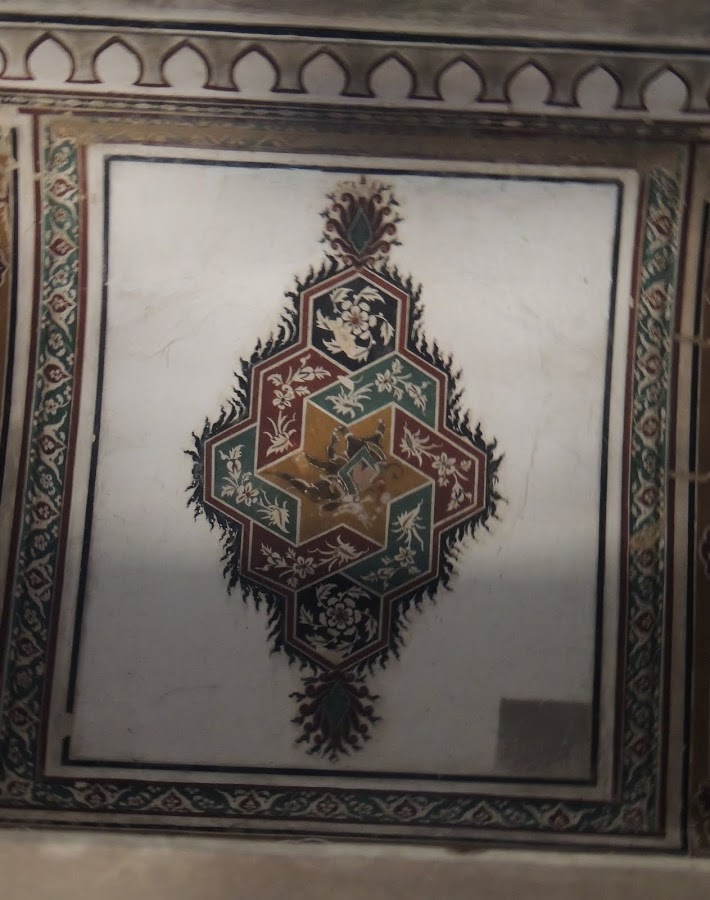 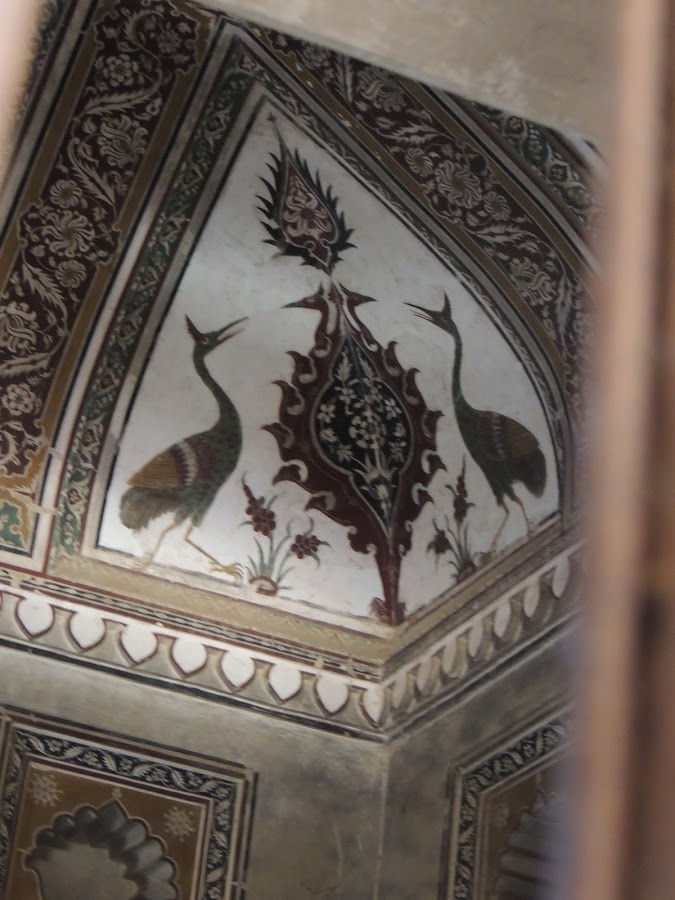 The windows of the upper levels give us a wonderful view of the town below us, and I can imagine what a sight it must have been, back in the seventeenth century when this palace was built. It must have been an uninterrupted view of the wilderness, punctuated by the sight of the lakes, fort and other palaces in the town. What a beautiful sight that must have been! As we stood in the small balcony, eyes shaded from the sun, staring up at the exquisite patterns painted above us, the breeze was quite strong, and our guide warned us to be careful.

A bunch of youngsters arrived, their voices heralding their advent from a distance, and our guide excused himself, saying he had to ensure they didn’t do anything foolish, like scribble on the wall, or try to climb down from one of the balconies! We were left alone to enjoy the temporary peace, musing on the purpose for which this palace was built.

“What a waste!” was my only thought, for the palace was never really used.

Accounts of Jehangir’s visit to Bundelkhand differ in their narrations. While some say that he stopped at this palace for just one night, others say he never stayed here, going straight on to Orccha instead, where he stayed for a few days at the palace named after him.

Whether Jehangir actually stayed here or not, all narrations agree on one thing – this palace was never used by anyone else. It was built for the Emperor, and thus, it would be sacrilege for anyone else to stay there. Besides, the royal family had their own palace, at the fort. Why would they live here?

And so, this gorgeous palace, considered one of the best examples of the style and the period, was fated to remain unoccupied, ignored, forgotten.

To be honest, I hadn’t even heard of Datia when I planned my trip to Gwalior, Orccha and Khajuraho. Then, the week before I was to leave, I attended a talk by Dr. Smita Dalvi on Islamic Aesthetics, and she mentioned Datia in the context of use of imperial red sandstone. The photos she showed us were so inspiring, that I modified my plans to include Datia in my itinerary, a decision I am so glad I made!

It is sad to see that Datia remains off the tourist map. I can only hope that the work being done right now will restore the palace to its former glory. And hopefully, the ASI and the Madhya Pradesh Tourism Department will work together in making people aware of the wonderful heritage that lies hidden here.