August 10, 2016
Man Singh Tomar was one of the greatest rulers of Gwalior. He was not just an excellent warrior, known for his prowess in the field, but he was also a great patron of the arts. His love for music is legendary, and his palace, the Man Mandir is an architectural triumph which stands tall even today. However, the story most often told and retold at Gwalior is that of his marriage to Mrignayani. 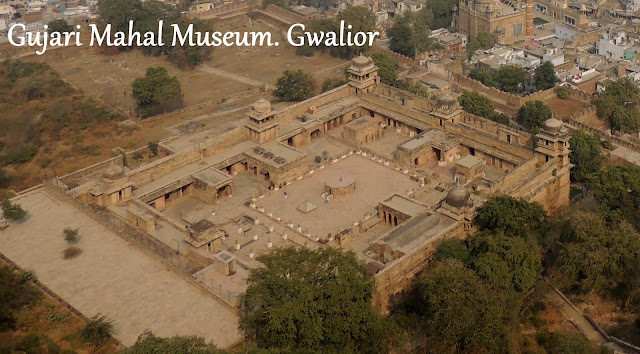 As was the custom in those days, Man Singh Tomar  had many queens, all of royal lineage. He was on a hunt, when a wild buffalo charged, and was stopped by a young girl, as beautiful as she was strong. The king was smitten and wanted to marry her. She was, however, from the Gurjar community, a pastoral community which was considered a lower caste, and thus unsuitable for the king. However, the king was adamant and determined to have his way. The girl finally agreed, on two conditions – first, that she would never be away from the king, whether at home or in battle, and second, that she would only bathe and drink from the water of the river which flowed next to her village. The king agreed to both conditions. He built an aqueduct to bring water from the river, all the way to Gwalior. The water however, couldn’t be carried up the hill. Hence, he built her a beautiful palace at the foothills, where he stayed with her. He named her Mrignayani – the doe-eyed one, and the palace came to be known as Gujari Mahal – the palace of the Gurjari queen!

Romantic as the story is, like almost all romances, it ends in tragedy. The other queens of Man Singh didn’t take as easily to the new queen, and their fathers felt humiliated that their son-in-law had married a woman of lower caste. They withdrew their support, and Gwalior was soon attacked by its enemies. Deprived of their armies, Man Singh succumbed in battle, as did his beautiful wife, who had accompanied him into battle, as promised. No one seems to know what happened to all his other wives. Most probably, as our guide suggested, they must have committed Sati. How could they live when their husband was no more? They have all but disappeared from memory as well, while Mrignayani herself lives on, in memory and songs, and through the palace her husband built for her.

Today, the Gujari Mahal is a Museum, a treasure of ancient heritage and sculptures. Rather apt, I think... A palace built for a beautiful woman, now housing beautiful sculptures! It is still an impressive palace, with priceless artefacts in every corner. Peacocks fly overhead, and perch on the walls, least bothered by our presence. It is a wonderful place, one that I can go back to, over and over again! 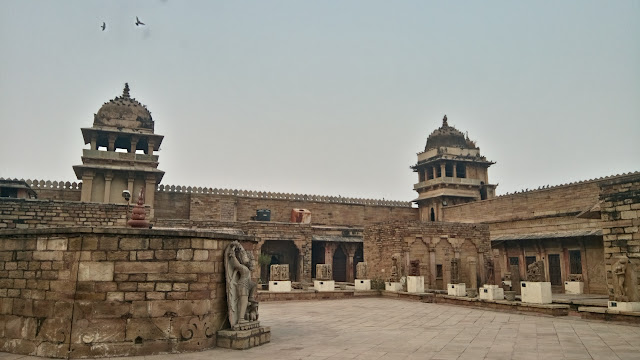 Yet, we could barely spend half an hour in this museum. We arrived just as the museum was about to close, and offered to return the next day. However, the caretaker informed us that there was a local holiday the next day, something we weren’t aware of. He offered to take us around himself, so we could see as much as possible in the shortest possible time. Here is a glimpse of what we saw….

The museum also has a small section devoted to weapons and coins found in the region, located in a circular basement structure at the centre. However, after all the stunning sculptures we had seen, we had no eyes for anything less impressive.... Even Samhith, for once, wasn't too interested in the weapons!

However, we were even more impressed by the caretaker, who took me around, pointing out what to notice. He even gave me some extra time to linger, as he locked up the museum for the long weekend. As we left, I offered him some money, the same I would offer a guide, but he refused, saying that he was happy I had come, and brought my son along. Few people come here, he said, and it was his duty to show us around. It was such a surprise to hear that, and I would have loved to talk  more, but he was off on his cycle, leaving us behind, with the peacocks for company.

This is one museum that I don't think I can ever have enough of, and hope I can someday visit again, to enjoy at my leisure!