August 08, 2016
“Everything here is massive!” was the recurrent thought as we explored Gwalior fort. First the colossal Jaina sculptures, then the monuments within the fort, and now the temples. They are impressive at first glance by their sheer size, but looking closer, there are so many intricate details on the smallest scale that amazement turns to awe at the talent and artisan-ship of those who built them. There are two such huge temples on the hill, both part of the Gwalior fort – the so-called Sas-Bahu temples and the Teli ka Mandir, both of which have interesting sources for their names! 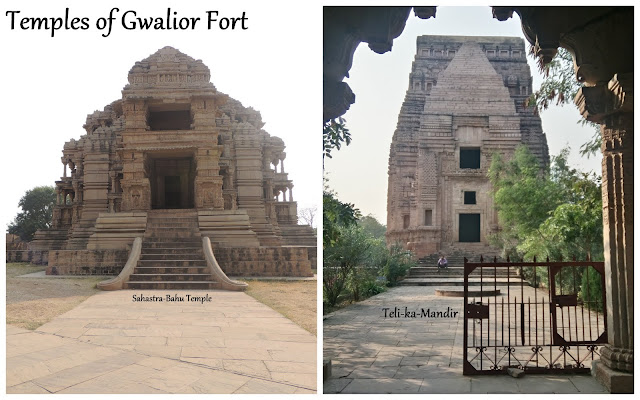 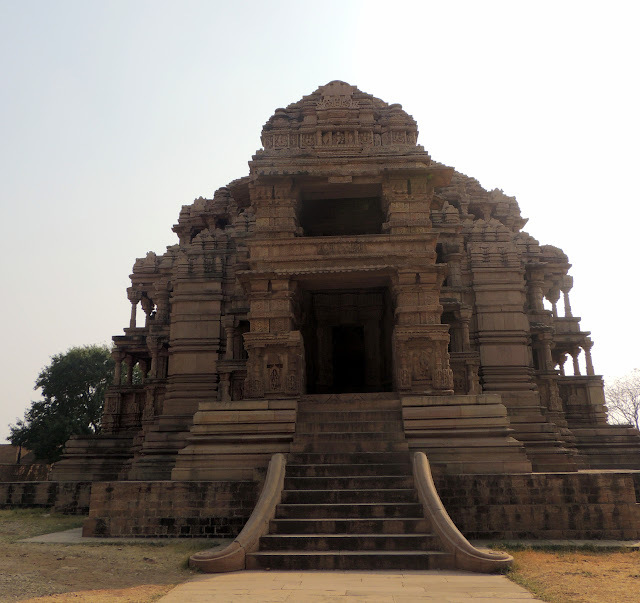 The Sas-Bahu temples are so called, because in local lore, they were built by mother-in-law and daughter-in-law. However, the name is believed to be a corruption of the word “Sahastra-bahu”, the original name for the bigger temple. The deity inside the temple is also disputed. While most believe that the idol depicted Vishnu with a thousand arms (Sahastra – thousand, bahu – arms), it has also been suggested that it might have been the temple of a local cult, deifying Kartyaveerarjuna (from the story of Parasurama), who was called Sahastrabahu since he had a thousand arms. There are also suggestions that the temple might originally have been a Jain one!


The temple is said to have been built in 1092 by King Mahipala of the Kacchapaghata dynasty. It is believed that his wife was an ardent devotee of Vishnu, and that she initiated the construction of the temple. Later, her daughter-in-law, who was a devotee of Shiva, built a smaller replica of the temple by its side, with the only difference being the deity in the sanctum! Thus, the temples came to be known as those built by mother-in-law and daughter-in-law, and the name ‘Sas-bahu’ soon replaced ‘Sahastrabahu’ in collective memory!

We were tired by the time we arrived at these temples, and were only able to explore the bigger one. While the temple is still intact, most of the sculptures are broken, and their faces hacked off. According to what I read, only a part of the defacement has been willful, and the rest is due to weathering. Also, the temple has been heavily restored at some point of time.

For Samhith, the best part of the temple was the curved decoration at the entrance, flanking the steps. It was just perfect for him to slide down, and a lot more interesting than the sculptures, with their faces destroyed and empty sanctum. 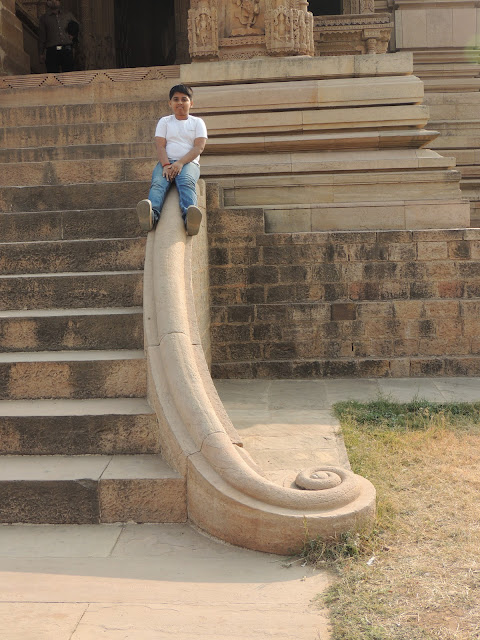 I was, however, stunned by the detail and elegance of the figures on the pillars, and on the lintels.

These are the figures on the pillars flanking the entrance.

This is the lintel of the main entrance, where the figures are easier to identify.

The positions of these figures clearly indicate that this must have been a temple of Vishnu. More interesting however, is the manner in which all three deities have been depicted, with their consorts on their laps, in the position Uma and Maheshwara are usually seen in!

Every inch of stone seems to have been carved, like the base of the door frame....

The lintels over the doorways of the main sanctum as well as other smaller shrines have the most interesting depictions!!

It is extremely interesting to see how the temple had shrines to multiple deities set on the sides of the main sanctum, and the deities seen here.

The pillars are covered with interesting depictions too. Sadly, they are so badly defaced that we can barely identify a few.


And the central hall, bound by pillars is impressive at first glance by its sheer size…. 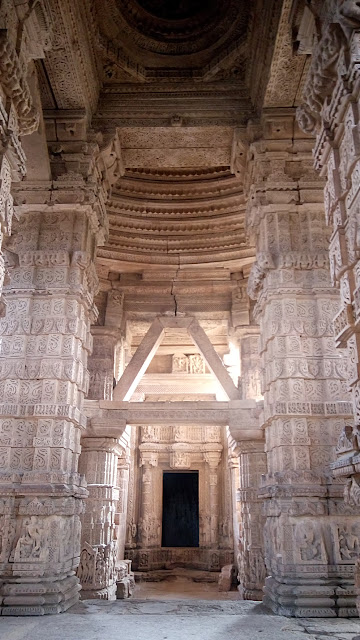 The ceiling is even more impressive. Look closer, and you can see many figures, some flying, and one deity with his consort. Sadly, it is too damaged to get any more details. 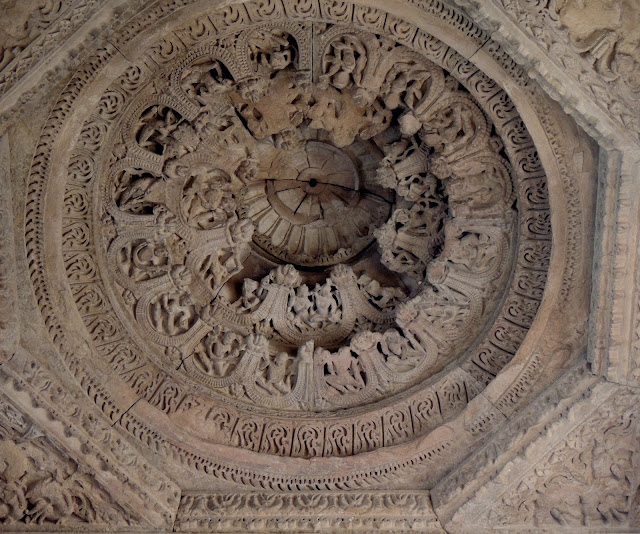 The outer walls are also covered with sculptures, though they are even more damaged than the ones inside. 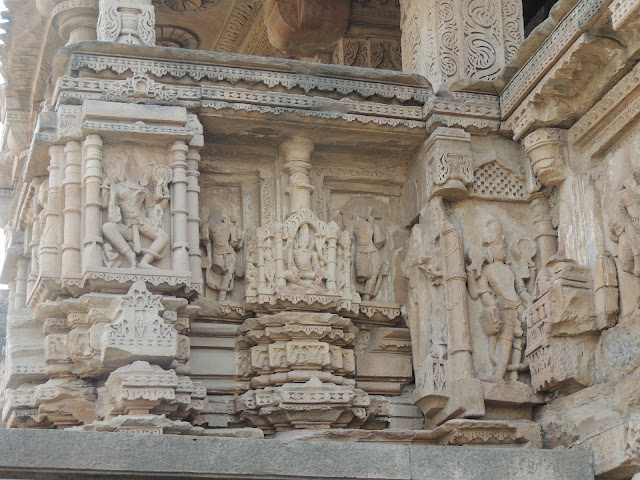 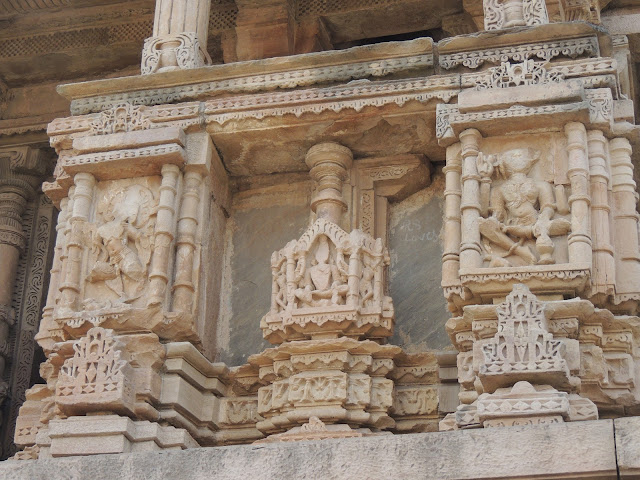 It would be an understatement to say that we were impressed by this temple. As I came out, I wondered what the temple would have looked like, in its heyday. If it was so impressive now, can you imagine what it must have been like, then?

Anyway…. Moving on, we headed to the Teli-ka-mandir, our last stop on the hill. 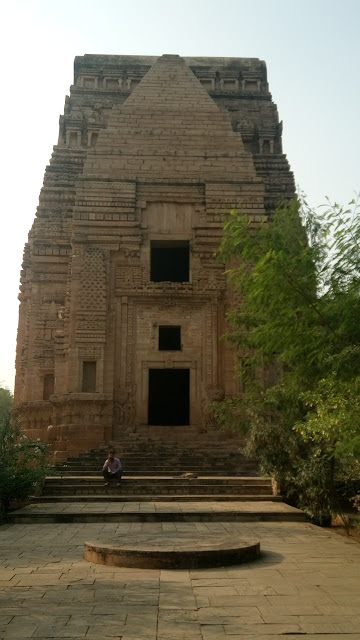 No one really knows why this temple is called “Teli-ka-Mandir”. There are many theories, some as plausible as the others are far-fetched. While the most common belief is that the temple was built by the oil merchants, who were called Telis (tel = oil), there is also a belief that the name comes from the Telang Brahmins who worshipped here during the Rashtrakuta period, and even that the name comes from the Telengana region due to the southern influence seen in the architecture!

The architectural style of this temple is unlike anything else in Gwalior, which is why there are suggestions that this was built by someone from the south, or at least someone inspired by the style of southern India. The plain rectangular sanctum is topped by a wagon vaulted superstructure, which rises to a height of about 24.4 m, and makes this the tallest structure in the fort.

The doorway is elaborate, with river goddesses carved on the lower portion, flanked by attendants and dwarapalakas.

On the lintel is Ganesha, and above the doorway is a carving of Garuda. Interestingly the dwarapalakas flanking the river goddesses are Shaiva (the one on the left which is less mutilated resembles Bhairava), which suggests a Shaiva shrine, whereas the Garuda above suggests a Vishnu shrine. However, the interior of the shrine is completely bare, with no trace of carvings or idol, home only to bats today, and does not give a hint about the deity it once housed.

The outer walls of the temple are covered with detailed carvings and sculptures in the niches, though most are destroyed or unrecognizable. Here are two interesting panels….

Very little is known of this temple, though the style and some short inscriptions suggest that it was built around the year 850 A.D., during the reign of Mihira Bhoja (836-88), the most powerful among the Pratihara kings to rule Gwalior. This also makes the Teli-ka-Mandir one of the oldest structures in the Gwalior Fort!

Isnt it fascinating to think that the oldest structure in the fort is also the tallest?

On that note, we complete our tour of Gwalior Fort. There is more to Gwalior though, so look out for my next post!