November 03, 2009
might be a city most well known for its temple to Shiva as Mahakal, but it is also the abode of Parvati as Harsiddhi, a temple occupying a position equal to that of Mahakaleshwar. 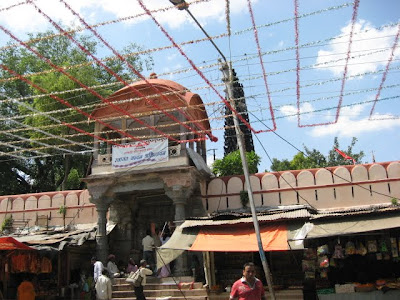 The Harsiddhi temple is one of the 52 Shakti Peeths situated all over . According to legend, Shiva married Sati, the daughter of Daksha, a Prajapati who was proud of his position and disliked his ascetic son-in-law. In an effort to put his son-in-law in his place, Daksha organized a yagna and deliberately did not invite Shiva. Hearing of the grand yagna, sati visited it by herself, ignoring her husband’s advice, and, furious with her father for thus deliberately ignoring her husband, cast herself into the flames lit for the yagna. Her act led to Shiva’s ganas going berserk with rage, and Shiva himself arriving at the scene and dancing the Tandava (the angry dance) with sati’s body in his arms. While Shiva was later calmed down and amends made, it is believed that parts of Sati’s body fell on earth as He danced, and each of these (totaling 52 in number) are revered as Shakti Peeths.

It is believed that the Harsiddhi temple is the place where Sati’s elbow fell. 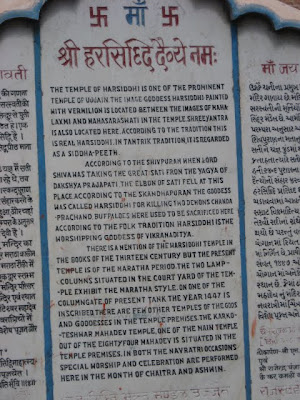 The temple is a small, but beautiful one, and the idol of the goddess is enshrined between those of Mahalakshmi and Mahasaraswati.

The original temple, like many others is no more, and the present temple was built during the reign of the Marathas. Two huge Deepasthambs (pillars for lighting lamps)  stand proud, welcoming us to the temple, and one can’t help imagine how beautiful they would look, all lit up, as they are during Navaratri! 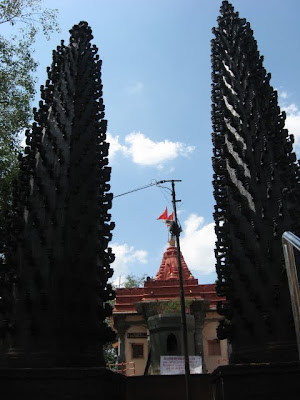 Of special importance is a small shrine just outside the temple dedicated to Mahamaya. This shrine is situated a little below ground level and is approachable by steps, but is closed to visitors. The importance of this shrine is a lamp which burns day and night and has been burning so for ages. The only person who enters the sanctum is the pujari who visits it several times a day for offering prayers to the goddess and maintaining the lamp. 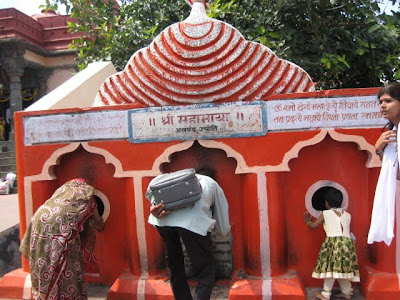