March 20, 2011
The royal enclosure is the nucleus of Hampi. Spread over an area of 59,000 square metres, it is believed to have once housed over 45 buildings, all used by the royal family.

The most striking, and today, the only structure still standing in a recognizable form, is the Mahanavami Dibba. Rising to a height of 12 m, the platform is a three tiered structure, which was probably used for religious ceremonies. 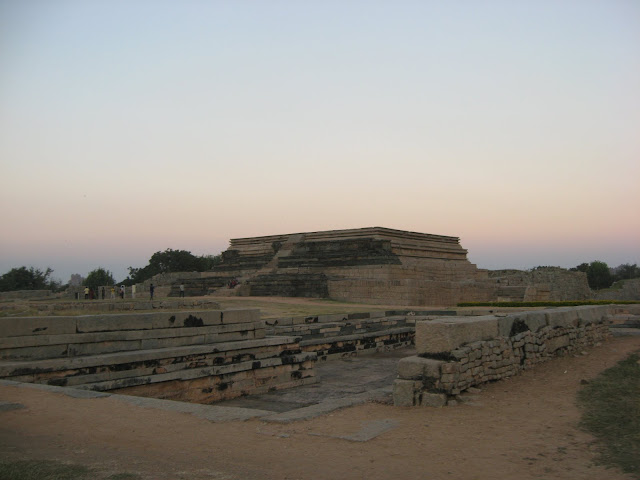 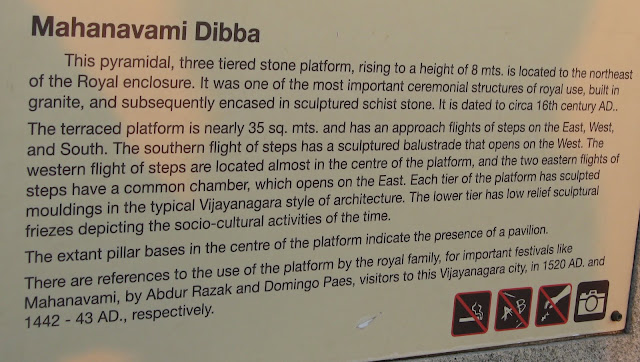 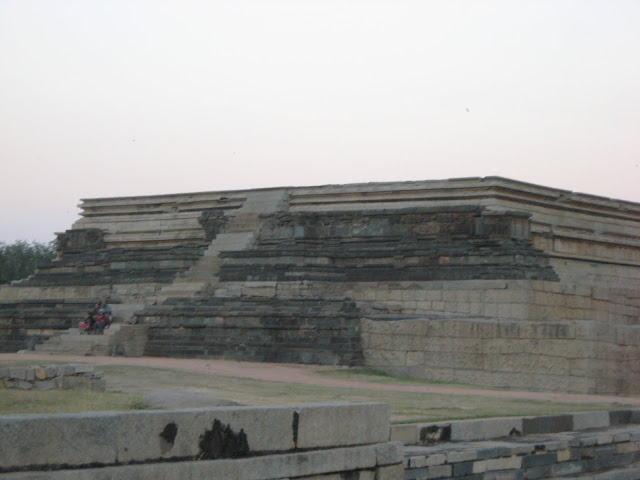 The name given to the platform – Mahanavami Dibba – is interesting, since it seems to specify that the celebrations on Navami – the ninth day of Navaratri were celebrated here. Usually, it is Dasara, or the tenth day which is celebrated on a grand scale, while navami celebrations were restricted to prayers to Saraswati, the godess of learning and knowledge. On second thought, it is reasonable to assume that the navami celebrations were considered so important, since the acquiring of knowledge was considered so important during the golden era of Vijayanagara. 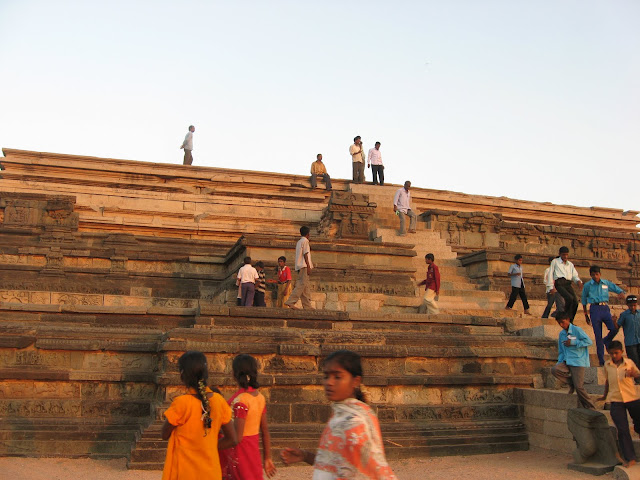 The platform is believed to have built and extended over a period, by successive kings after their conquests, as a means of celebration. It is also believed that over this platform was built another covered structure, probably built of wood. The platform itself is not a solid block of stone, but has a passage and staircase inside, leading from the first tier to the top! 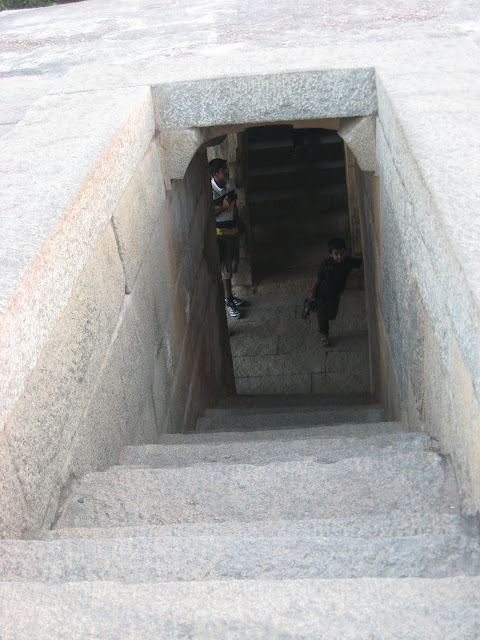 The fact that it stands till today is a miracle! And as to the granite blocks which make up this impressive structure, each one is a work of art, depicting scenes from everyday life in the empire. They depict people, animals, hunting, wars, visitors, merchants, jesters… so many things that its impossible to enumerate them! 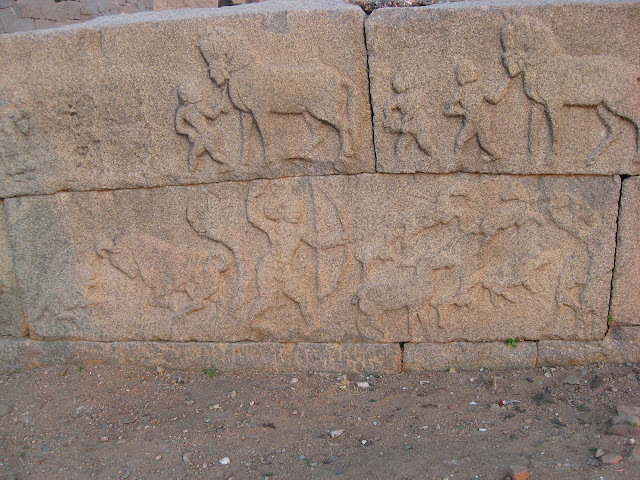 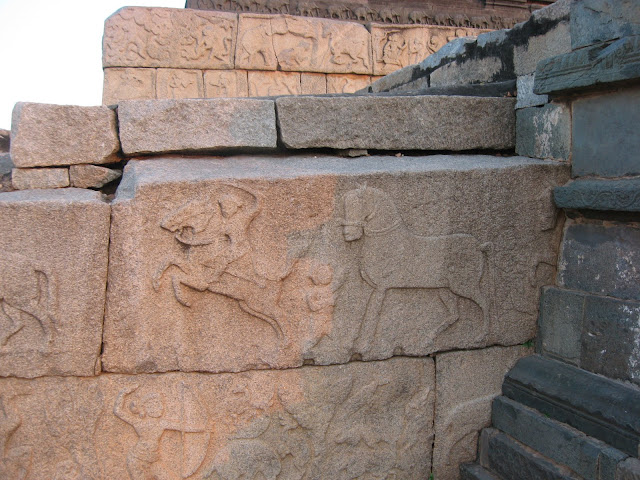 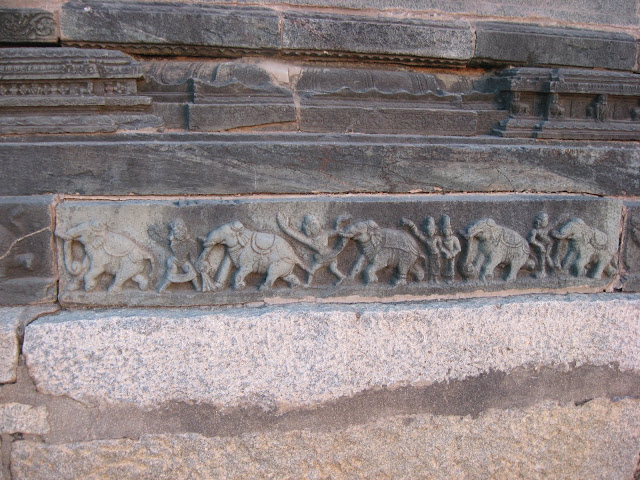 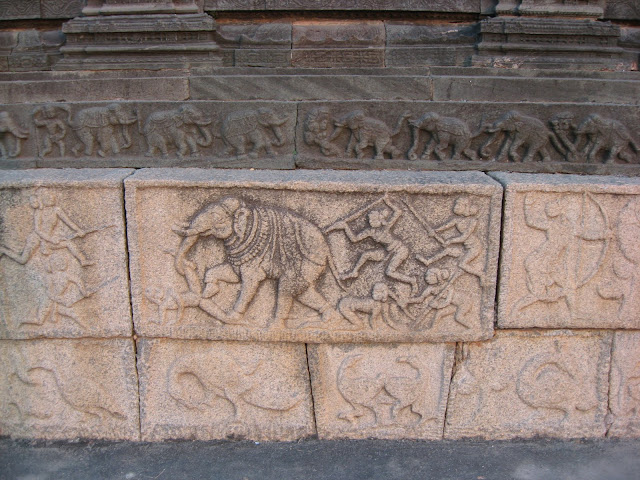 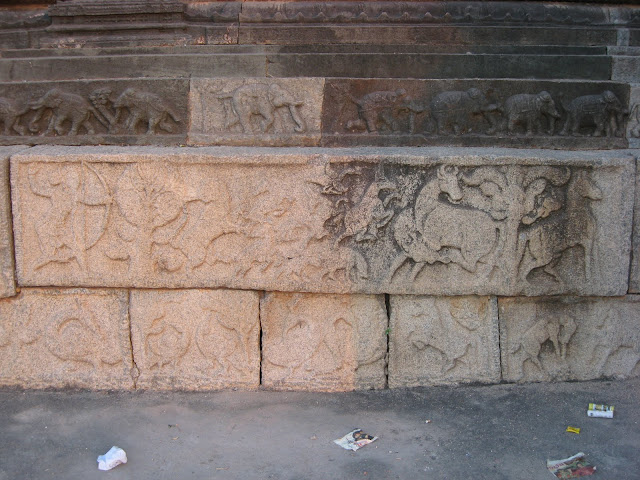 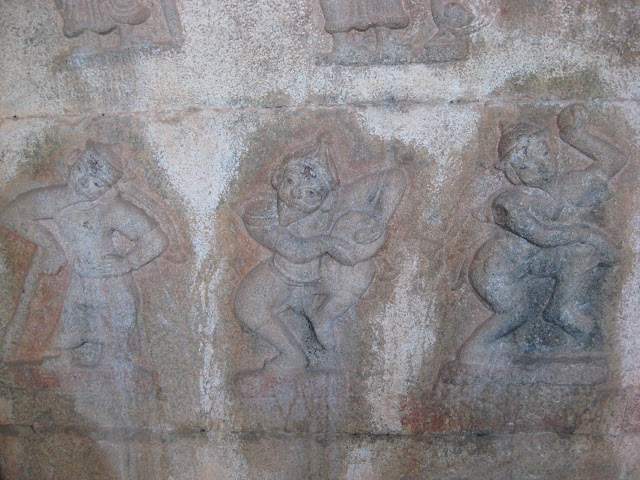 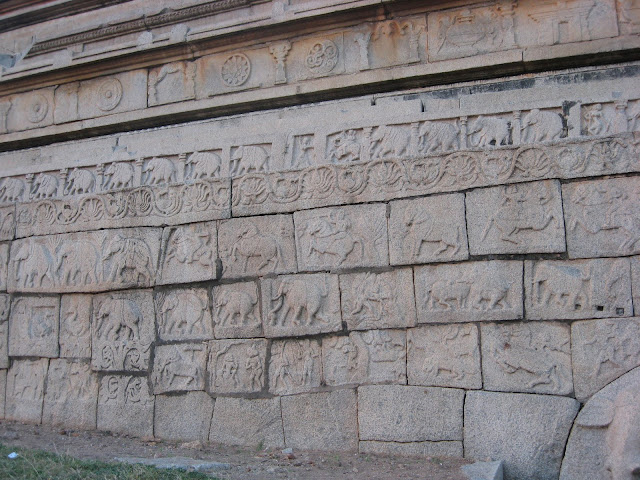 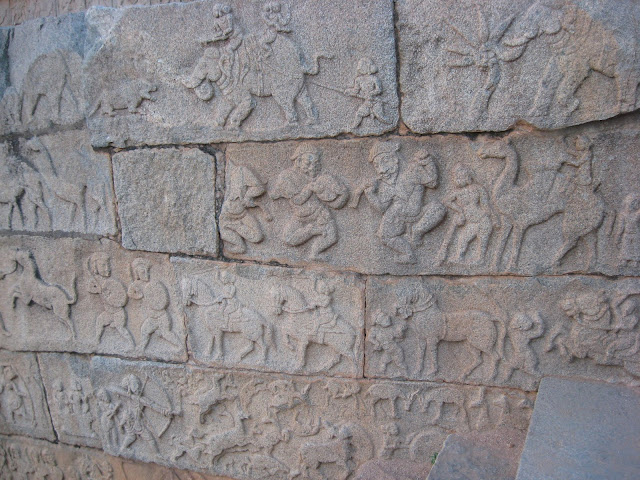 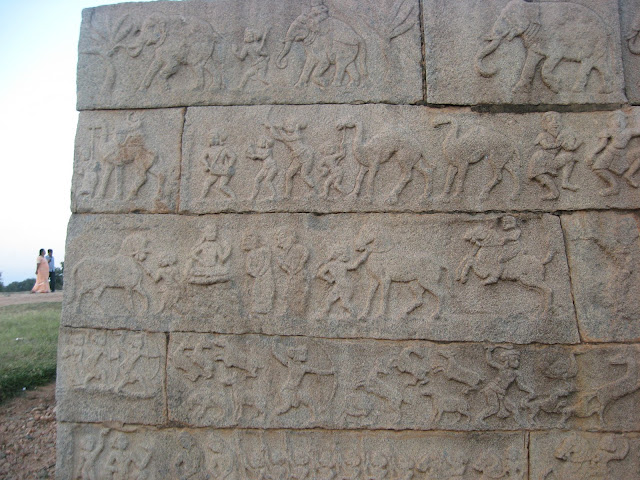 Standing on the Mahanavami Dibba gave us a wonderful view of the surroundings, and what was so striking was that all we could see were the bases of the buildings which once housed the royalty! None among the exalted structures survive. Whether that was a result of the carnage here or simply a result of time, is debatable, so let’s not even get into it! Little survives to tell us which was once the king’s treasury or which was his residence, and each person you talk to has his own opinions. The ASI booklet itself mentions that some of their identifications have been wrong, and that they are trying to re-create the area using computer models to match them up with ancient written accounts of the city. So, instead of talking about which ruins are what, let me just show you what I saw…. 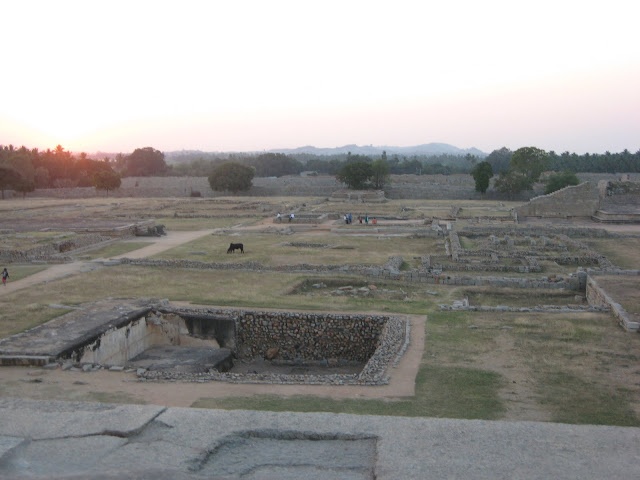 Here is even a short video which I took there… unfortunately, people kept getting in the way, so try to ignore them, please!

Now we come to two of the best things about the royal enclosure…. The first is the aqueduct, which has been restored, and looks as good as new! Can you imagine a 600 year old pipeline made of stone??? And to think that it could work even today!

And recently (around 1985), archaeologists trying to restore the aqueducts wondered why one portion of the water channel pointed downwards…. 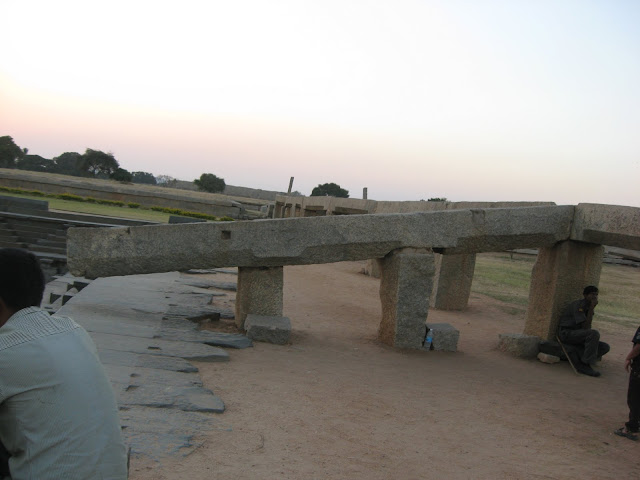 Digging there, they brought to light one of the most beautiful structures here – a stepped tank! Buried under the rubble through the centuries, it is certainly the most well-preserved structure in Hampi! 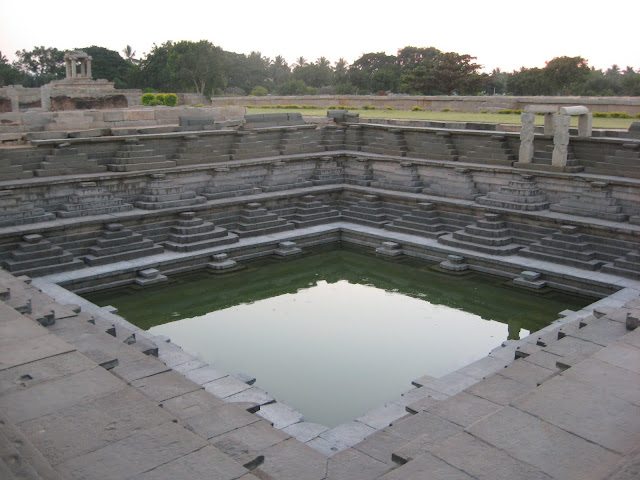 Made of schist blocks, square on plan, this tank has 5 landings, each connected by ornamental steps. Significantly, each block bears a label or a mason mark implying that the layout was pre-fabricated! While ‘kalyanis’ or tanks like this are quite common in Andhra and Karnataka, this one looks most similar to the step wells or ‘baolis’ in Gujarat and Rajasthan. The fact that this is one rare example of pre-fabrication in that era makes one wonder if the stepped tank had been ordered all the way from the west!
The second most interesting thing we saw was a secret chamber! You can imagine Samhith’s excitement when we saw this underground chamber (whose roof has fallen in, so we can see the chamber from above). This was apparently used for secret meetings (what else?) and has a passage leading to it. It is in the form of a ‘6’ with the arm leading to the chamber. Once the door connecting the arm is closed, any person inside the passage would simply walk round and round without ever reaching the chamber! And considering that even now the passage is pitch dark, it must have been a scary proposition at the time! of course, the boys in our group had to try to get in, and Samhith happily went along, laughing at me for not venturing inside. My sense of adventure restricts itself to taking photographs of such secret chambers – not venturing inside!