March 20, 2011
I have almost come to the end of my Hampi trip reports. Here are the last two enclosures we visited..
The Zenana Enclosure
The zenana enclosure is a large walled area, thought to be the royal women’s quarters, so named, because it was built in the Indo-Islamic style of architecture. 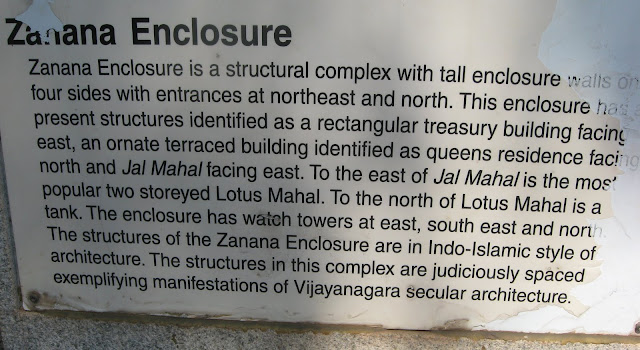 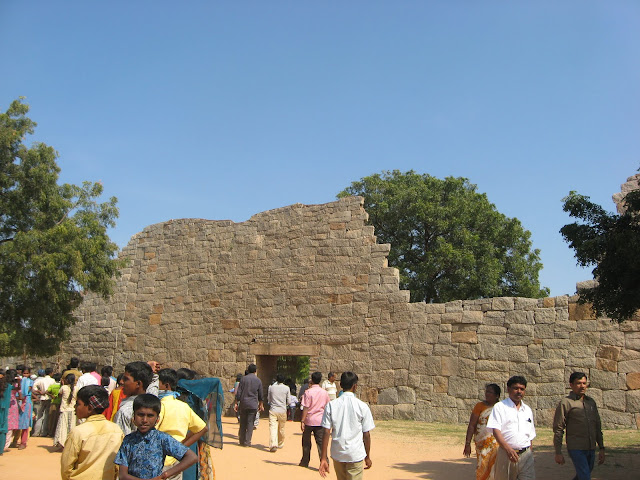 There are three watch towers in this enclosure, which are, interestingly, free standing, and not attached to the walls, suggesting that they were built at a later date. 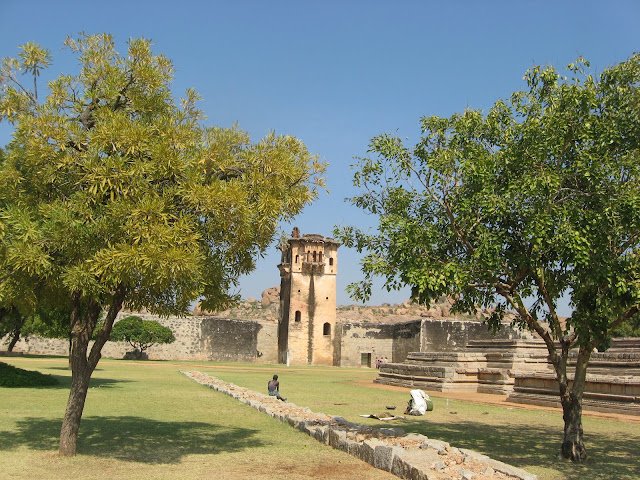 On our left is a long structure, either the women’s guards’ quarters, or more probably, Rama Raya’s treasury. This is now a museum, with some interesting pieces, worth a look. 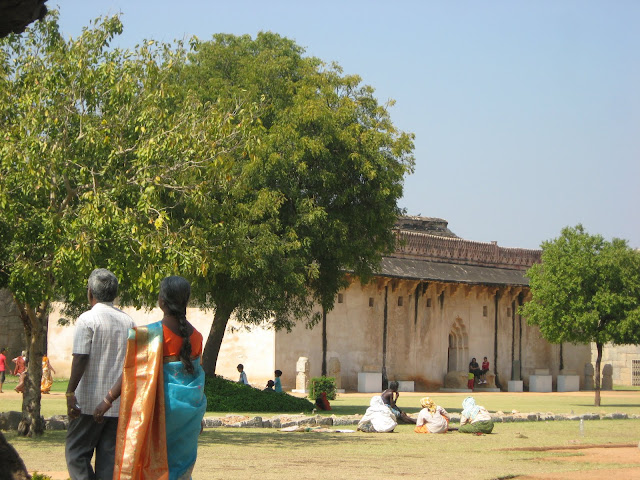 Nothing remains of the palace which once stood here, except its base. From the size of the base, it is evident that this would have been one of the largest in the city. 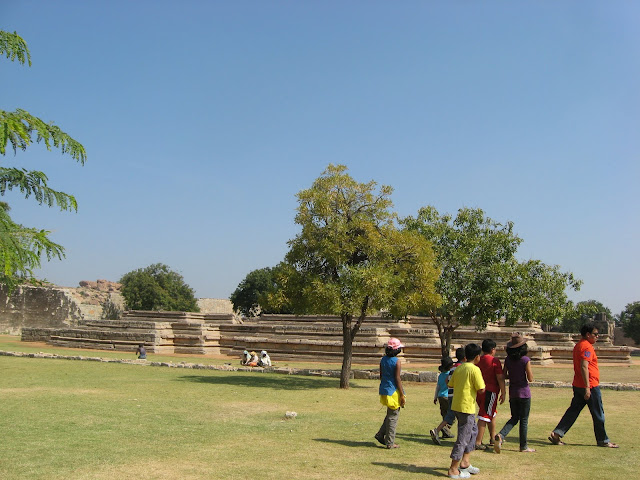 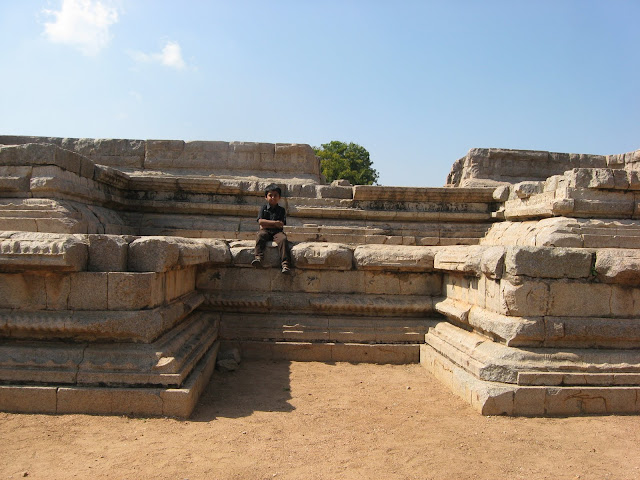 Next to it is a water pavilion – a palace like structure which once stood in the middle of a rectangular tank. Again nothing much remains except the base. 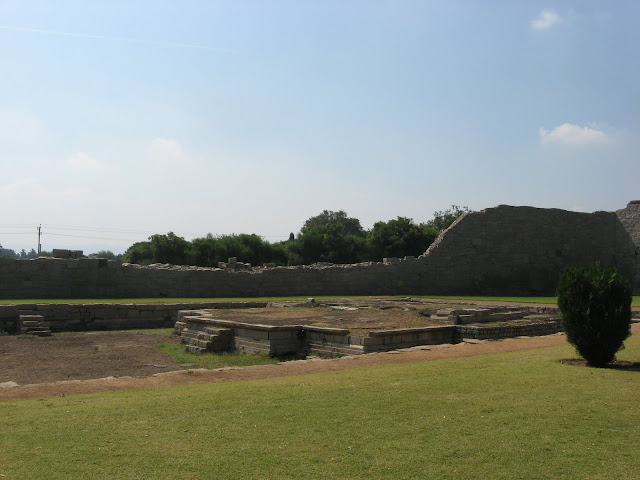 The only structure still standing tall amongst all these ruins is the Lotus Mahal. This two storied structure is a blend of Indian and Islamic architecture, with a huge amount of lime plaster and stucco ornamentation. The roof of this structure consists of nine pyramidal shikaras of varying sizes, the central one being the tallest. From the top, it would appear like a blooming lotus, giving the palace its name. 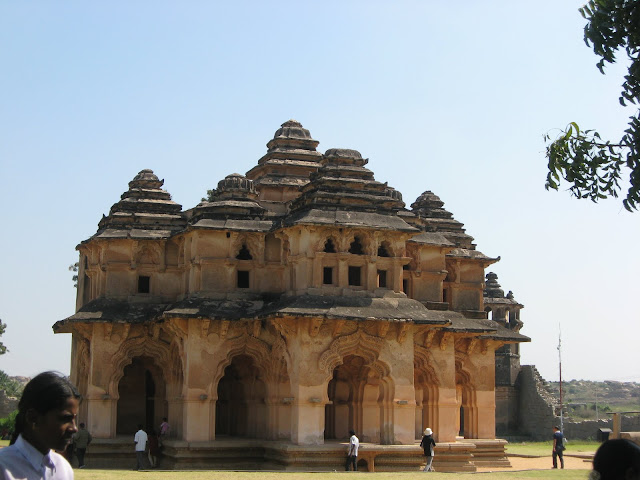 Arches supported by 24 square pillars carry the superstructure, and stucco works adorn each and every arch. It is believed that every wall and pillar was once adorned by such ornamentation, but no traces remain of these. 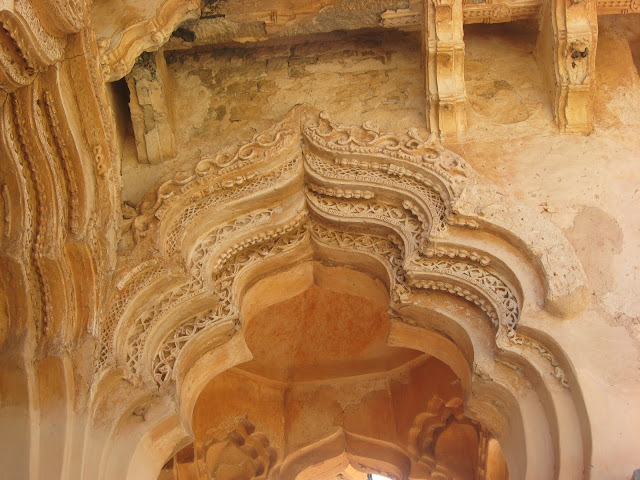 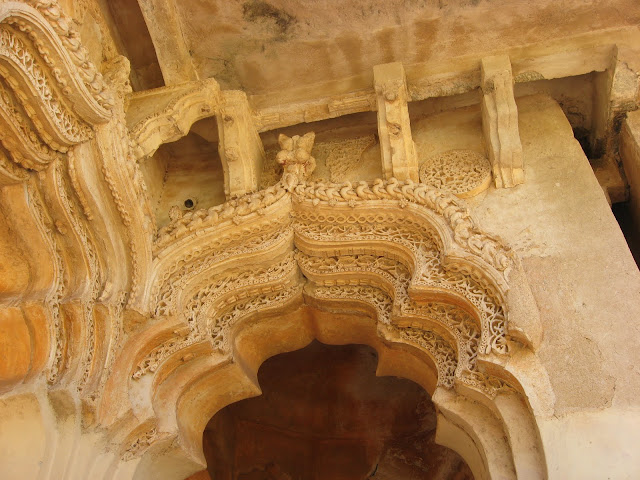 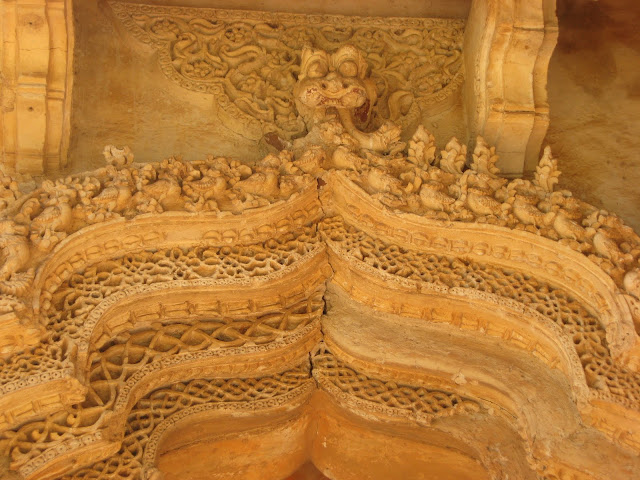 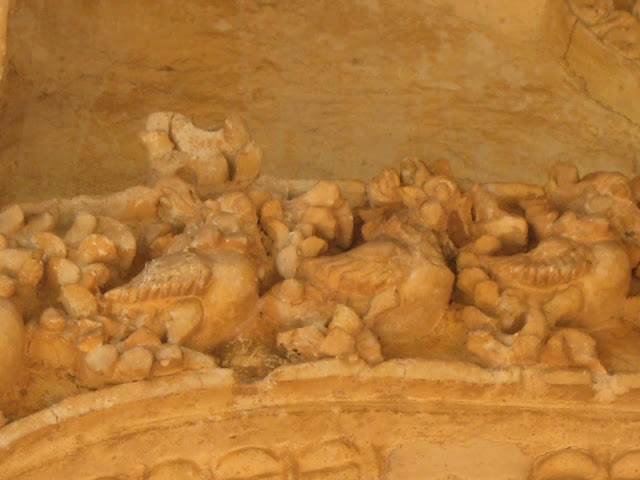 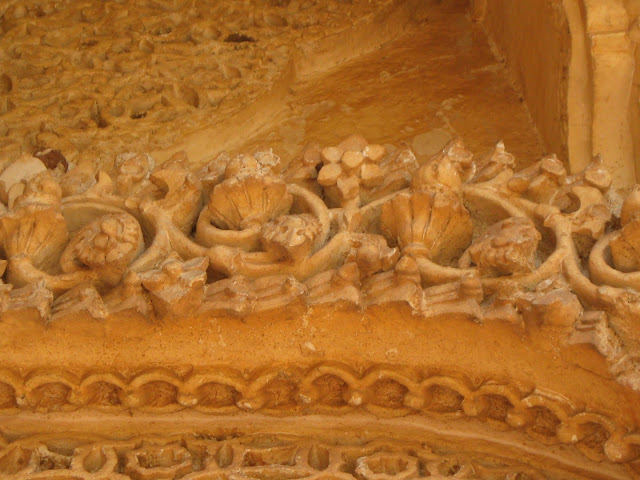 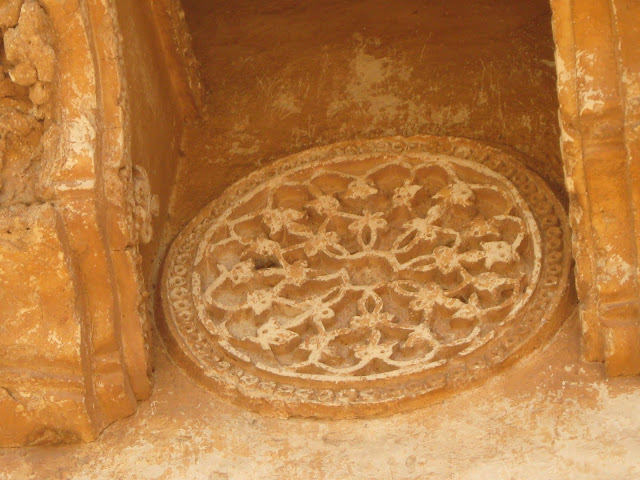 Inside, the structure is very plain. All the decoration seems to have been reserved for the outside. It is now prohibited to enter, and we can just get a glimpse of the interiors. Climbing to the first floor is impossible, with the door leading to the steps having been barricaded, so we had to content ourselves with the outside.
The entire enclosure has been the topic of much speculation regarding its use. While it was once thought that these were the palaces of Krishnadevarya’s two favourite queens, there has been no confirmation. It is also speculated that the two palaces were built of sandalwood, and were plundered by the invaders. Our guide also mentioned that bits of sandalwood were found among these ruins, but this is something which has not been mentioned anywhere, so I would rather take such speculations with a bit of salt! But most interesting was the idea that the Lotus palace was a kind of Hawa Mahal, and provided air conditioning by means of water channels built inside the walls. We were told that these systems were destroyed by the invaders. This did sound rather interesting, if true, and I hunted in vain through the museum and all the material I could find, but found no reference to anything like this. What I did find out was that according to the ASI, the lotus palace dates back to the reign of Rama Raya, which puts it at a later date than Krishnadevaraya, and thus, it couldn’t possibly have been destroyed by the invaders! So much for history and legend!
Elephant Stables 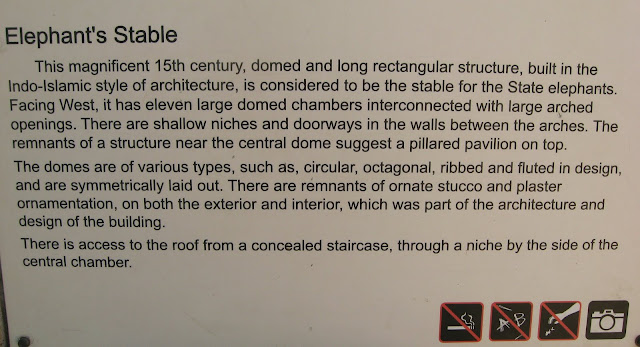 The long, immense structure with eleven chambers is certainly one of the most well known structures in Hampi. The size, as well as its design seemed to indicate that these were the elephant stables – not just any elephants, but the royal ones, taken out in procession during the Dasara festival. 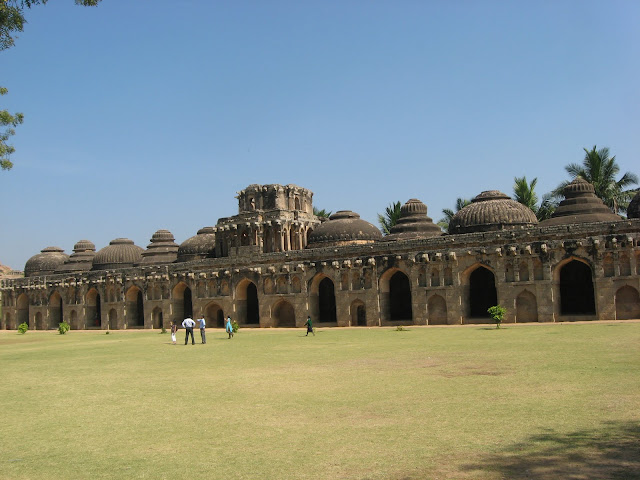 Each of the eleven chambers have beautiful, arched entrances, which makes one wonder whom they were built for! Would the elephants have appreciated the beauty of the arches, the different types of domes, and the structure over the central one where the mahout could probably climb up for a change? 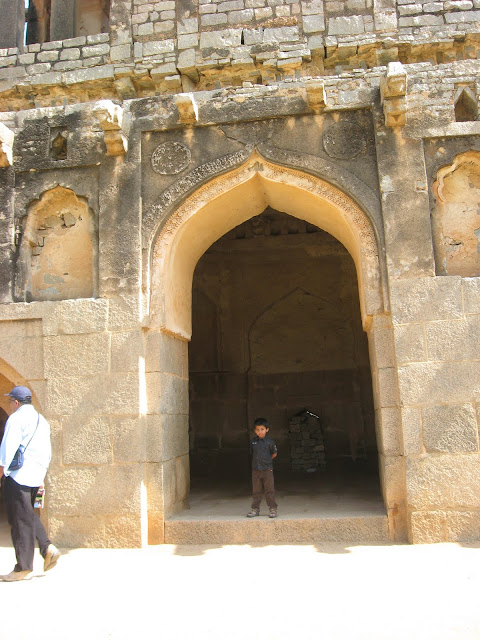 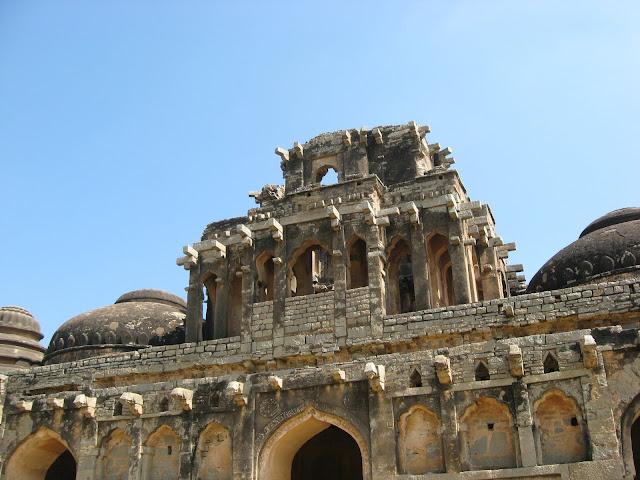 Another structure nearby has been considered as either the mahouts chambers or maybe guards quarters. Today, it is a mini-museum, displaying sculptures found in this enclosure. 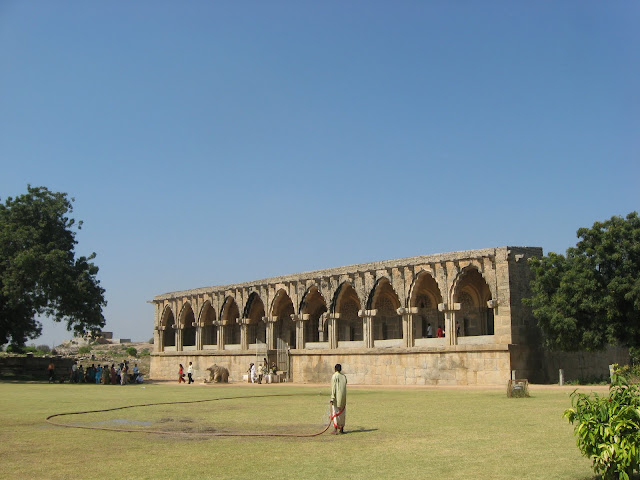 A stone elephant outside attracted a lot of attention, most kids trying to climb up! It is at such instances that I wish we had more guards around to stop people clambering over everything they can, and can totally understand why so many areas are cordoned off for tourists! 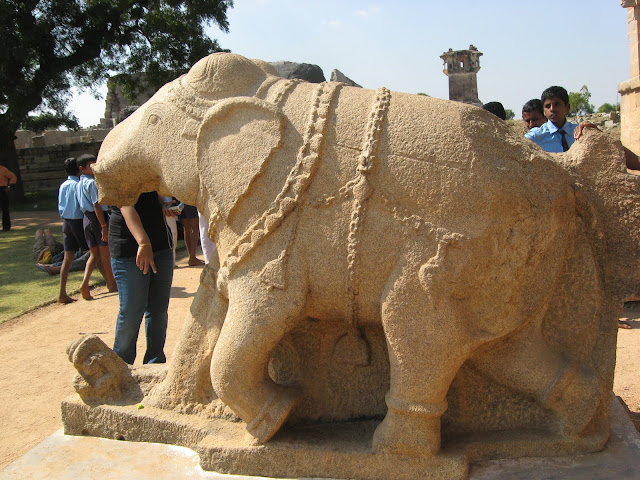 Recently however, all these identifications have been proved wrong, and it is speculated that the so-called elephant stables may actually be Rama Raya’s secretariat and the other structure his audience hall!