March 21, 2011
There are just too many things to see in Hampi, and a day is too short to take it in. I knew, even when I planned the trip that I would barely skim the surface if I gave it just one full day, but chose to go ahead simply because I wanted Samhith to get an idea about the greatness of our heritage. Besides, roaming around ruins with a frisky and hyperactive seven year old can get rather tiring, especially if he is not interested, and at that point of time, I didn’t know how he would take it. From that point of view, my trip has certainly worked. On the down side, we now have a thirst for more, (and from experience, I know that the thirst will never be appeased). Further exploration will have to wait till he grows older and can understand things in much more depth than he does now. I am happy that I have at least sparked an interest! So, we did miss out on quite a bit… the two Ganeshas, for instance, the riverside path from the Virupaksha temple to the Vitthala temple, which is filled with shrines….. all the hills, and so much more… I am done with writing about the major sites we did see, so I thought of rounding off the series of posts with some memorable experiences during the trip.

Our first surprise was near Kamalapura, when our auto driver stopped suddenly in the middle of nowhere. I thought he wanted to take a leak, and stayed inside. I was really surprised when he asked me if we had seen what was here.  Wondering what there was to see, especially since there was no board in sight, I got down, and he led me a little way inside and there, in front of me was a long channel, with a row of stone plates on either side! 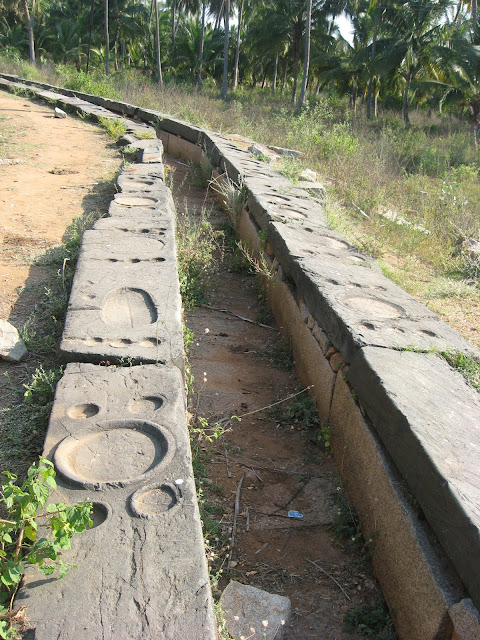 This was certainly one of the highlights of my trip, for where else can you see a row of plates laid out, ready to eat in, stretching over a length of over 10 metres? This is apparently a part of the erstwhile Bhojana Shala – dining hall – meant for the masses, and used during festive occasions when the entire city would be fed by the king! There were a couple of stone plates on display at the museum as well in the royal enclosure, but this was much more impressive! Just imagine a city where the king regularly fed so many people that he had an entire area set up as a permanent dining room, with plates ready to be served! Apparently, the water channels were there to help serve as well as clean up. That was where the serving people would walk while serving, and once they were done, water would be let in to wash the plates. The incline at which the channel was built ensured that the water would soon flow out; the channel would dry, and be ready for another round of serving! Amazing, isn’t it?? 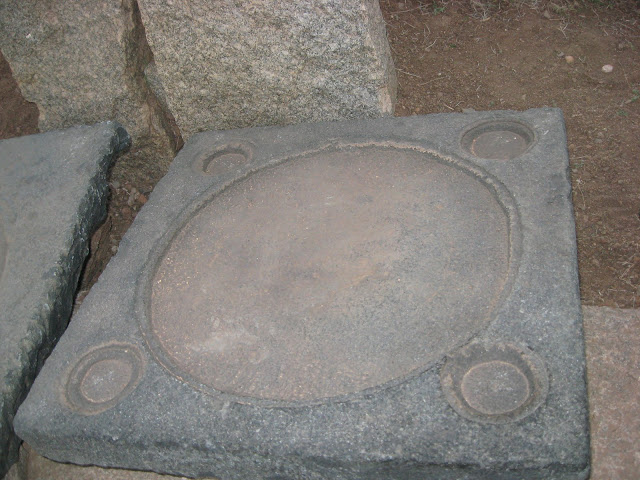 Our second most memorable experience was culinary. We were returning from a hectic trip to Anegundi, and had walked quite a distance, hungry, but not hungry enough for a complete meal, when we stumbled upon this menu outside a small restaurant….. 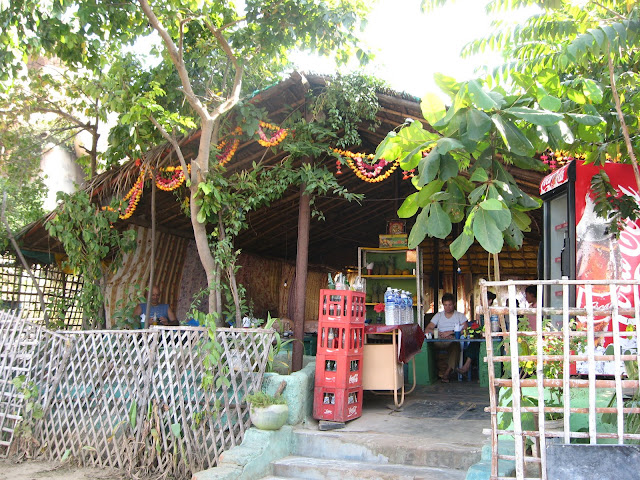 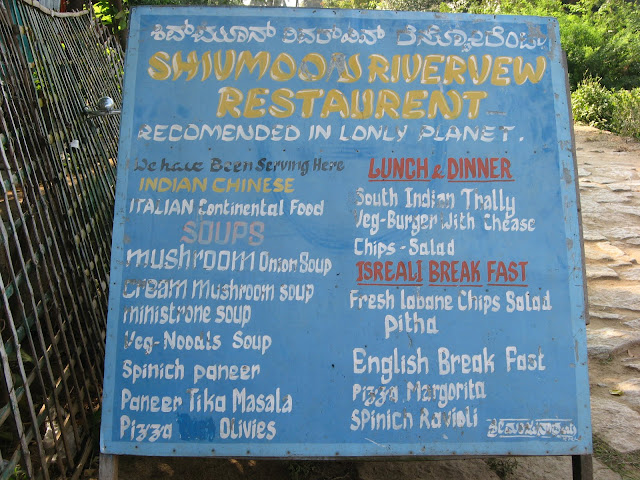 Intrigued by the LP recommendation, we entered and starting with a glass of fresh juice, we proceeded to fruits, and then to pancakes. By the time we were done, we had eaten much more than we had expected to, and paid less than what we had thought! What really made the experience memorable was last week, when we had pancakes from MacDonald’s for breakfast, and Samhith said, “I liked the Hampi pancakes a lot more!” It has been more than 3 months since we returned, and while he has to be prompted to recollect the places we’ve been to, the fact that he remembers the pancakes speaks volumes!
One other thing I shall remember from the trip is the ancient bridge which connected Hampi with Anegundi, on the other bank of the Tungabhadra. The river being a torrential one, it was not easy to build a bridge, and this one was built at a specially chosen location where the river bifurcates for a short distance before re-joining, creating a small island. Nothing much remains of this bridge, except pillars which stand in the water, showing us how the bridge once might have looked….. 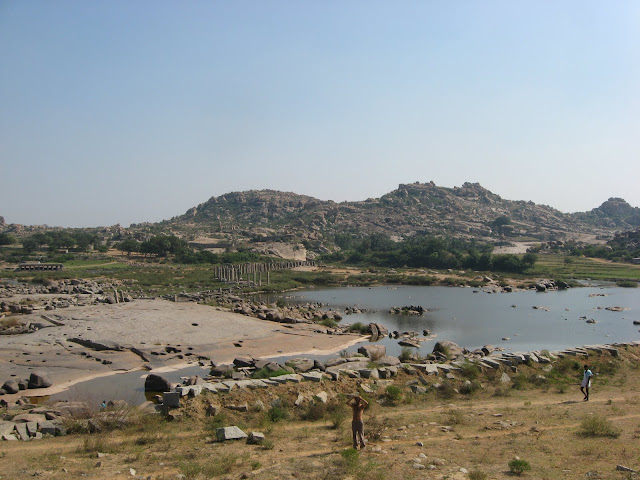 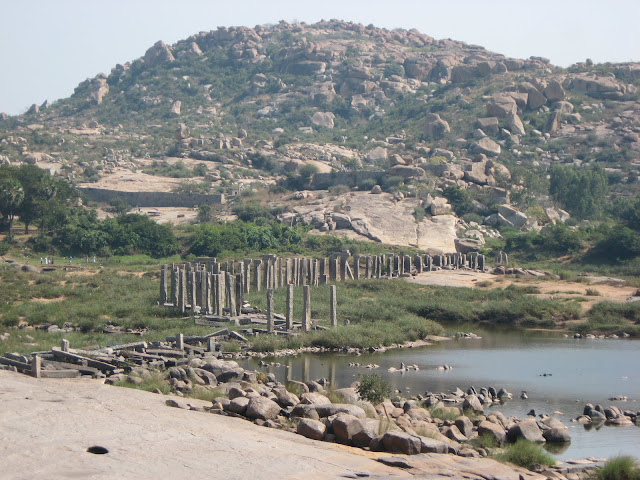 What makes this bridge really interesting to me is the fact that even today, no bridge connects Hampi to Anegundi. The only way to cross the river is by boat. The road route takes us from another direction, and involves a long journey best avoided.  The Karnataka government had briefly decided to build a new bridge, in spite of UNESCO advising against it. And then, the bridge under construction broke, leading to even more confusion. There have been recurring proposals to build bridges at alternate sites, but Hampi being a World Heritage Site, permissions have not been easy, and thankfully, the bridge idea remains in suspension. However, when we see on one side the ancient pillars laid under the rule of Harihara II by his brother (around the year 1400), and on another side we see the remnants of the bridge that broke down while under construction (in the year 2009), it is impossible not to compare the two and wonder at the state of our country!
With that, I can at last bring my Hampi series to an end. Now, I can cross the river to go over to the other side, to Anegundi, where we spent one whole day wandering around, exploring!