March 04, 2011
This is a continuation of my earlier post on Lavasa. Please read Part 1 before reading further. 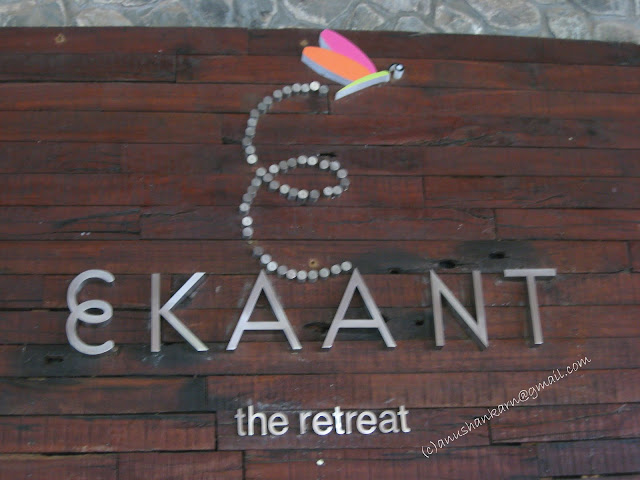 Waking up early is always a chore, unless one has something to really look forward to. This is especially true when we are on a holiday, but we bloggers were up and about before 5:45 in the morning of our day at Lavasa, eagerly looking forward to the nature trail we were supposed to go on.
As it turned out, our organizers had a late night, and none of them were awake! It was Biswajit Dey, who once again played Knight in shining armour! He was supposed to return to Mumbai the previous night, but fate had other plans for him, and he had to stay back. Stuck without even a change of clothes, our enterprising man took charge, and apparently washed his clothes, dried them with a hair dryer, and was ready by 6 AM. He hustled and bustled while we bloggers fended off a pack of dogs and took photographs by the dozens, and finally managed to get us a car to go and see the sunrise from Ekaant – one of the resorts at Lavasa. 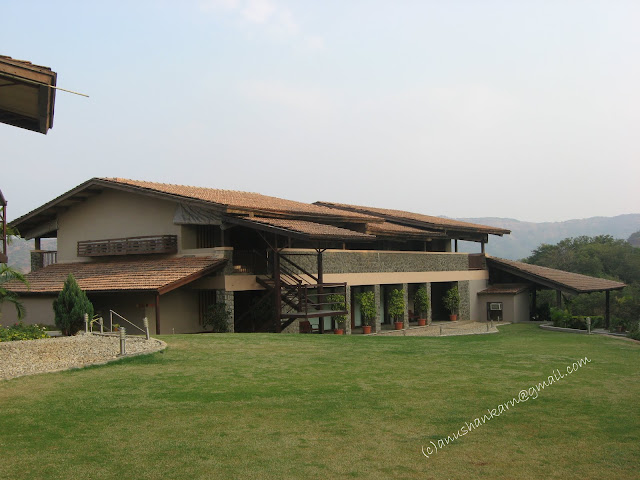 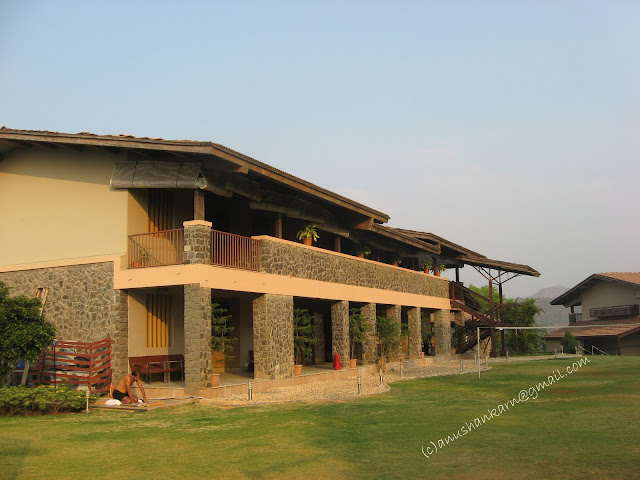 Ekaant is situated high up amidst the mountains and offers a breathtaking view of the Warasgaon lake (so named since it is formed by the Warasgaon Dam, but is commonly called the Lavasa Lake too, since it is the main feature at Lavasa). We reached the place just in time to see the sun rise behind the hills and rushed for a better view…. Without more ado, let me take you straight to the place so you can see the breathtaking sight for yourselves…………. 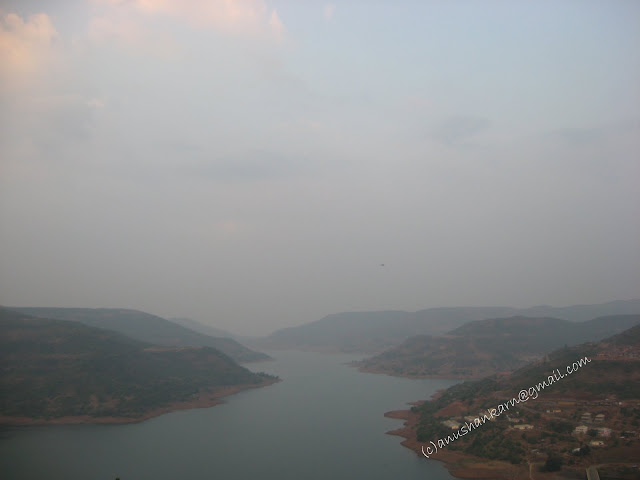 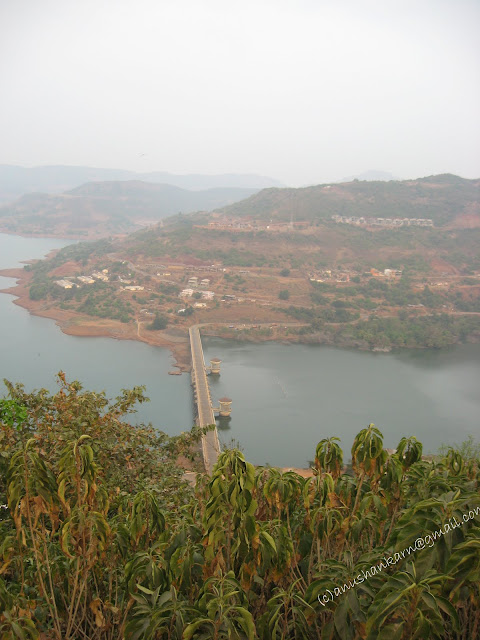 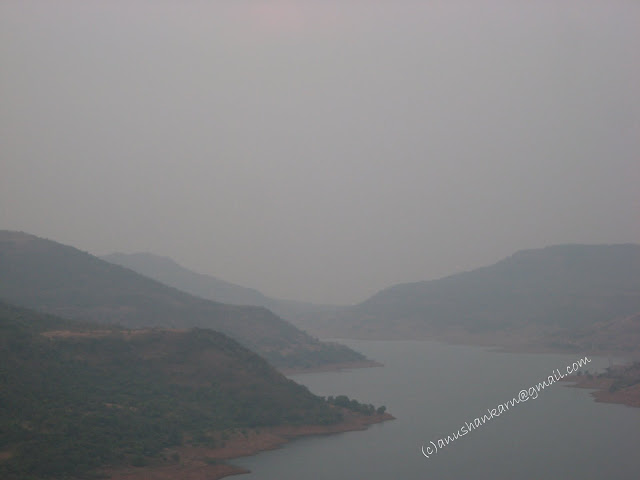 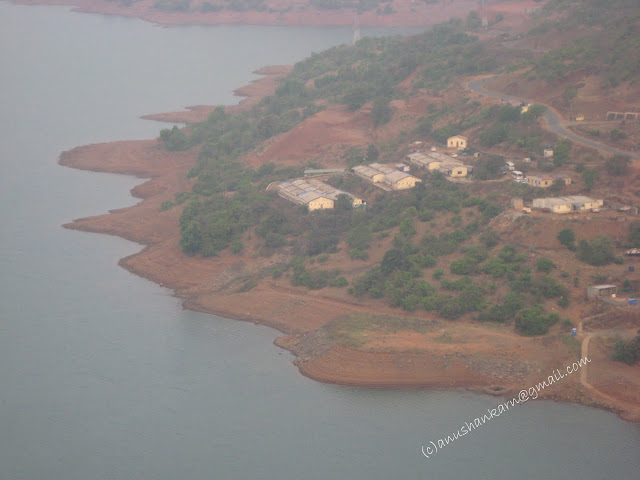 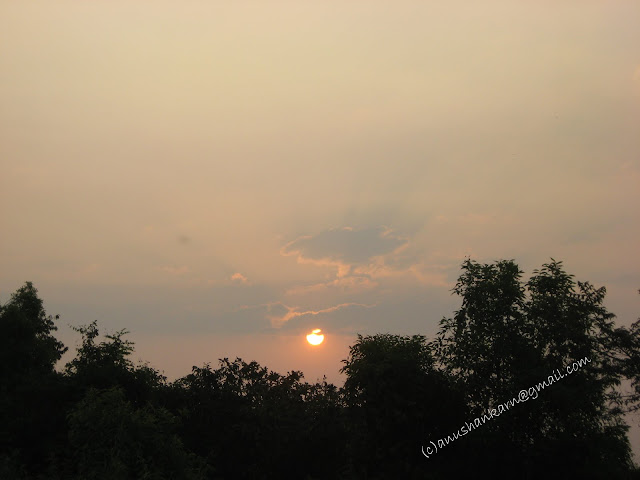 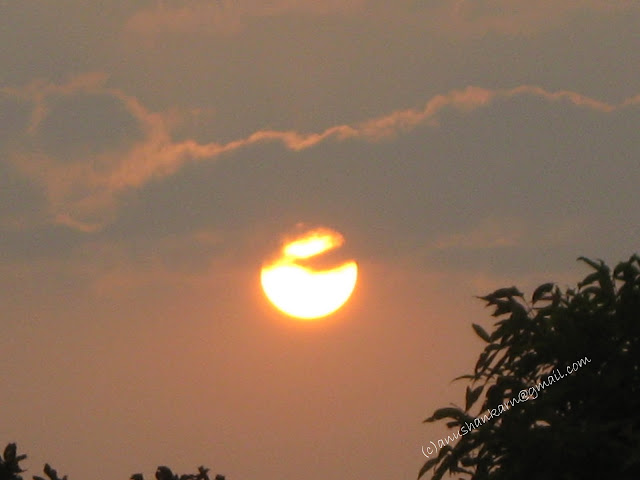 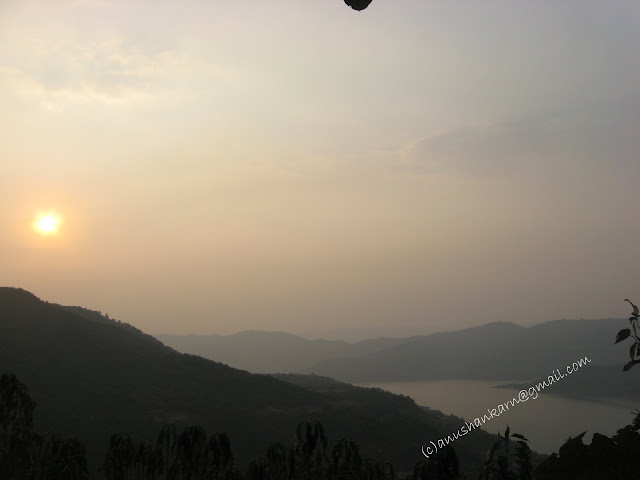 Liked the views, for more skies from around the world, go to Sky Watch Friday.

Once the sun rose and we had no more angles left to shoot from, we headed towards the other attractions…… the area behind Ekaant has been developed as a nature trail (of which I took so many photos that it deserves a post to itself, so nothing more right now) and there is a small section for kids with slides and swings which we enjoyed to the hilt, before heading over to their restaurant for a hot cup of tea. 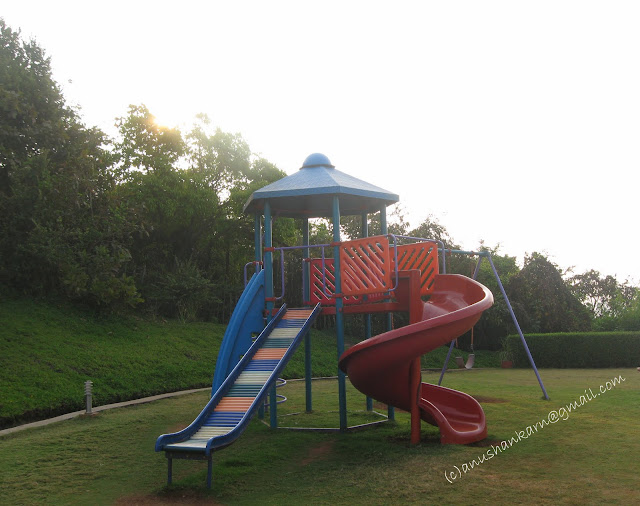 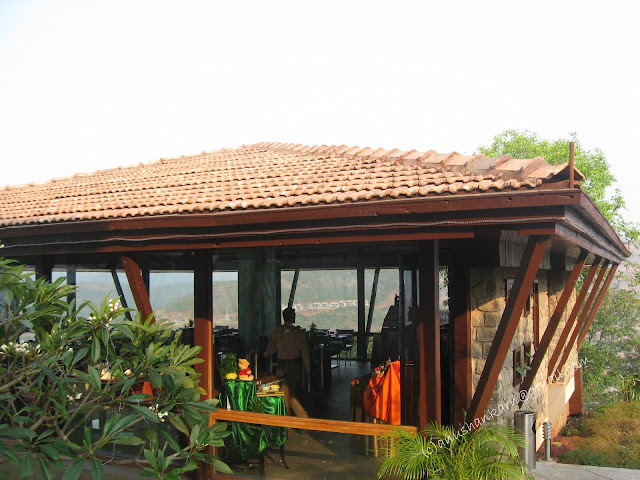 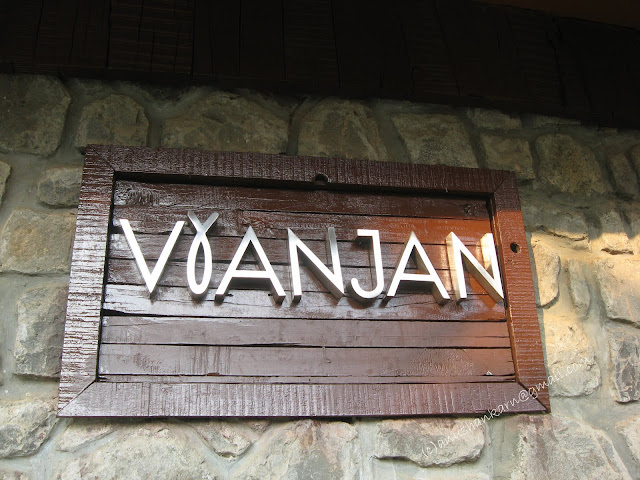 The restaurant at Ekaant is named ‘Vyanjan’ which literally means ‘delicacies’. While we didn’t sample any of the breakfast delicacies, the tea was certainly wonderful! Served in huge mugs, they managed to appease our hungry stomachs which had been begging for attention for hours! 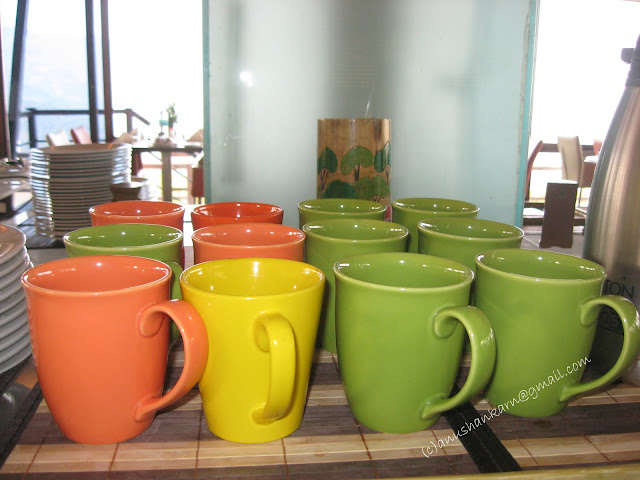 The restaurant of course gave us a great view of the lake and mountains, and we continued to click away happily. 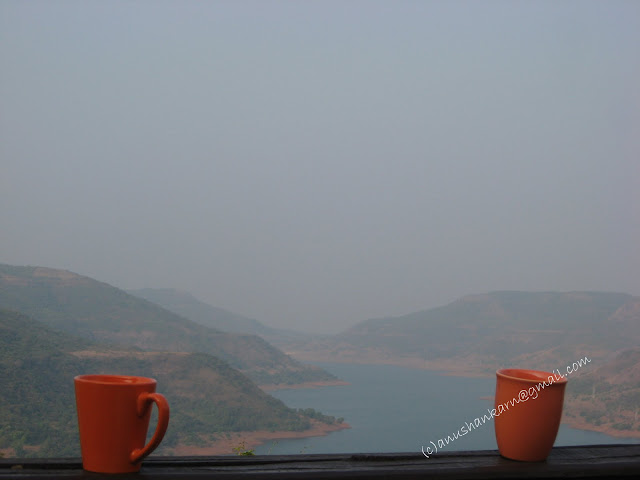 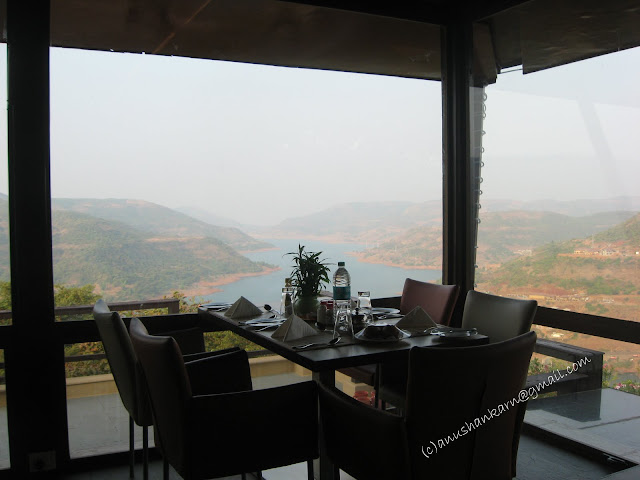 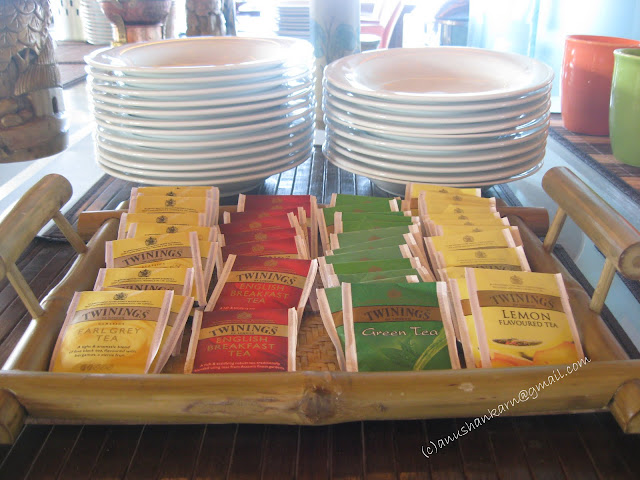 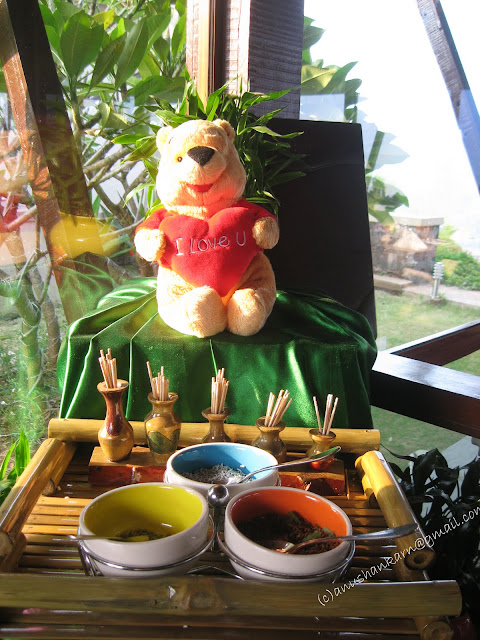 Of all the places we visited at Lavasa, Ekaant was the one which I really loved. Situated so high amidst the mountains, it was far away from the main part of the city to be calm and peaceful. Apart from the wonderful view, the resort itself seemed simple, with just 20 rooms, which assured us of solitude even when full! While the Waterfront area seemed to be an attempt to bring Europe to the Sahayadris, there were no such pretensions here – it was just a set of cottages with a great view and a wonderful ambience! This is one place I would love to visit sometime with Shankar and Samhith. The only qualm I have about the place is its relative inaccessibility – the only feasible way to get here is by car, and for people like me who don’t drive and prefer to use public transport, that can be a disadvantage. At the very least, you will have to hire a vehicle from pune. But then, I don’t think this applies for most of you, right?
For more details about Ekaant – The Retreat and booking queries, check out their website, which has all the relevant details.
Best season to visit is the monsoon (of course!). But make sure you book well in advance (at least 3 months), because it is one of the most popular resorts in the area.

Related articles from this blog: