March 25, 2011
It’s one of the most crowded areas in Mumbai, and even in the afternoon heat, the road is filled with people shopping. The place attracts all – from middle class housewives stocking up on household necessities to shopkeepers buying stuff at wholesale rates. The area between Masjid and Metro cinema is a mass of lanes and by-lanes, with names such as Kalbadevi and Bhuleshwar, Zaveri Bazaar and Lohar Chawl. The names themselves seem to take us back in time, and indeed, in some ways, it feels as if time has indeed stopped here. There is no trace here of the huge showrooms which now make up our colossal shopping malls. Instead, there are tiny shops filled with goods bursting from every nook and cranny, articles piled up against every wall.
The shopkeeper seems to open a Pandora’s Box, and brings out things we never knew existed in such a tiny space. Shopping here is an experience in itself, one I can never have enough of. I recently went on a shopping spree, camera in hand, intending to take pics and put them up here, but I ended up buying so much that my hands were too full of bags to even think of taking out my camera!
We started at Masjid Station, walking along the tiny roads which lead to Crawford Market, and then headed on to Mangaldas Market to stock up on clothes, then on to Lohar Chawl for electrical stuff, Zaveri Bazaar for simply gawking at the jewellery on display, and then to Kalbadevi for steel utensils for our extended family. By the time we were through, our legs were ready to give up, so we indulged and caught a taxi back home. But not before visiting the Mumbadevi temple. 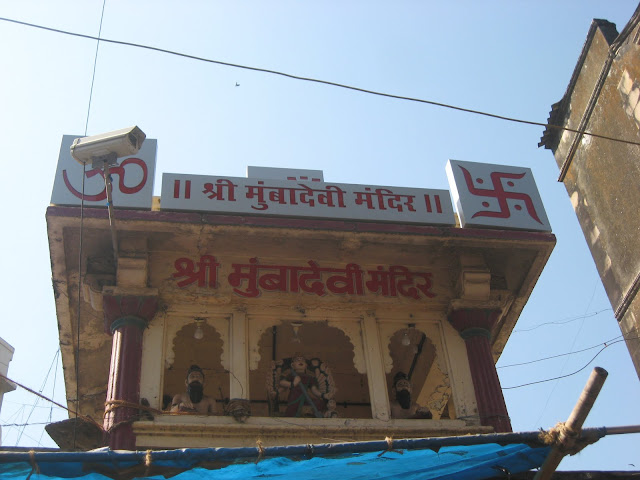 When Bombay was once a small fishing hamlet, Mumbadevi was the village goddess. It is she who is believed to have lent her name to the city which grew up around her temple. It is said that the original temple once stood at the site where the VT Station, now called Chhatrapati Shivaji Terminus, now stands. The ancient temple was demolished and re-built a couple of times in the 1700s, and finally the present temple was built at the northern end of Zaveri Bazaar. The temple stands at the same site till today, a small oasis in between the chaos that is the biggest wholesale market area in Mumbai. 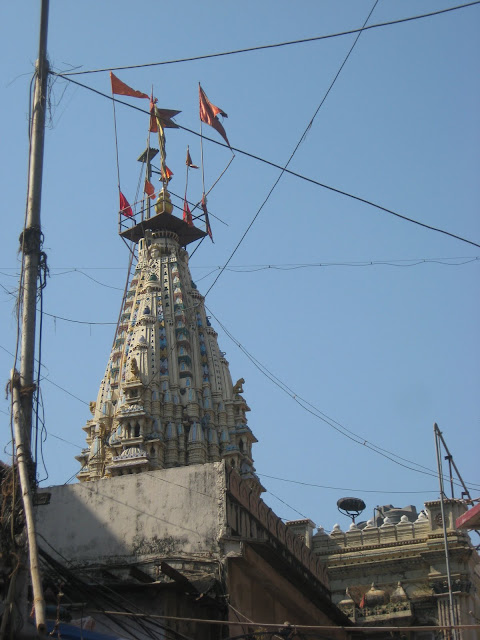 In the temple are the usual idols – the different forms of the goddess. However, the idol of Mumbadevi, covered in sindoor, with the distinctive nose-ring (a mango shaped one called ‘nath’ worn by Maharashtrian women) is the one which draws my attention, and then holds it. I can’t tear my eyes away from her even when it is time for me to move and allow others to see her too. I suddenly feel that she is, indeed the guardian of this city. It might be a figment of my imagination, but for a moment, I could feel her power, her strength - the same strength of will that I see in this city, which gives me the will to go ahead, and make the most of my life. This is the city which gave me the freedom once to find myself, and I felt the same as I stood in the sanctum, staring at her. She seemed to understand, for I thought I could see her smile, and I finally turned away, peaceful and content.

Related Articles (from the internet):