March 02, 2011
The Lavasa Women’s Drive was eventful in more ways than one. For one thing, this was the first time I left Samhith behind at home with his dad and grandparents. While he has been on picnics and camps without me, and even stayed over at my mom’s place without even thinking of calling me up to wish me goodnight, the idea of me going away leaving him alone was apparently unpalatable! He vacillated between yes and no until I told him that if I couldn’t go on my holiday, he couldn’t go for his overnight camp from school either! That set the seal on my trip, and I rushed out from home even before the sun rose, to reach Bandra Reclamation on time! The ground was filled with people and cars. The cars were all decorated, screaming out their support for varied causes – from cancer to the environment – while the people were either high on excitement or sleepy from waking up too early! 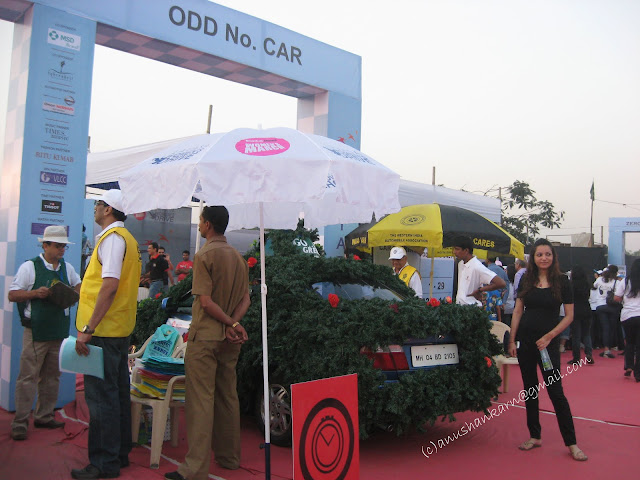 My sister was the one I thought of, as I stood watching one celebrity after another flag off the cars. Firstly, she is tall, which would give her a much better view of the happenings, while I had to stand on my toes to just get a glimpse of Arjun Rampal sleepily waving off one car after the other.
Secondly, she is such an avid autograph collector, that she would have made her way through the throng to get his signature on a piece of paper – something I can’t even imagine myself doing!

Once I managed to find the other bloggers I was supposed to be with, and we had introduced ourselves to each other, we busied ourselves taking photographs of all the cars passing by. The most prominent colour was, of course, pink (being a women’s rally after all), closely followed by green (which, incidentally is the most popular colour of the season – ‘eco-friendly’ being the key word at present!). Here are some of the interesting cars we managed to see…… 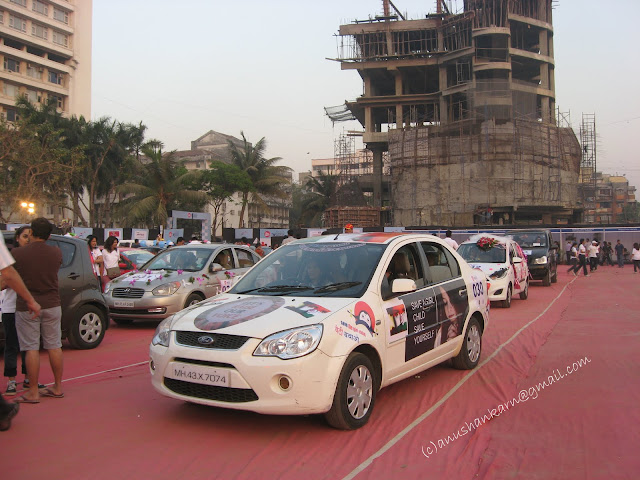 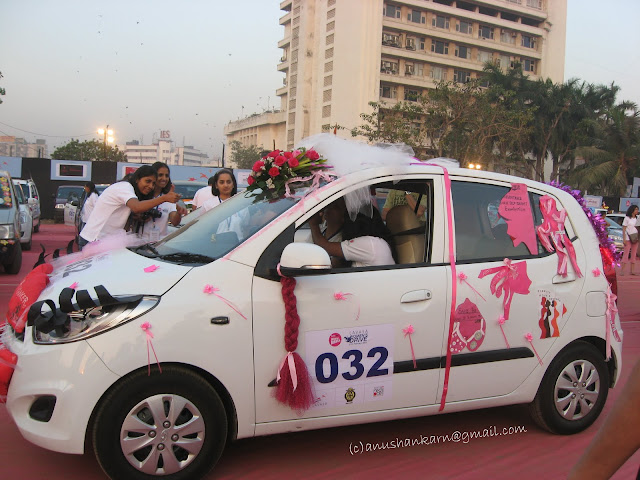 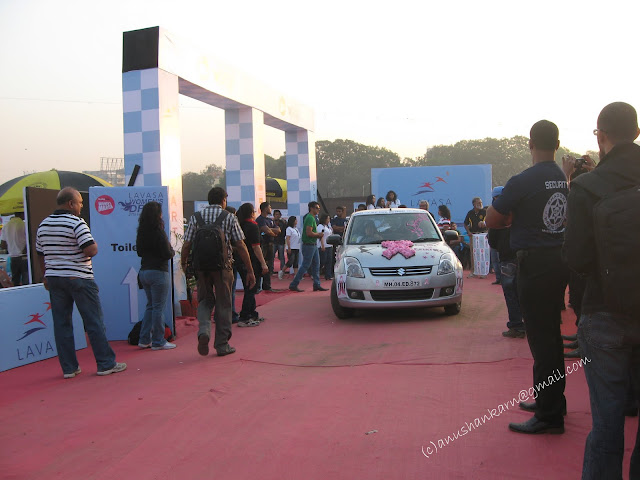 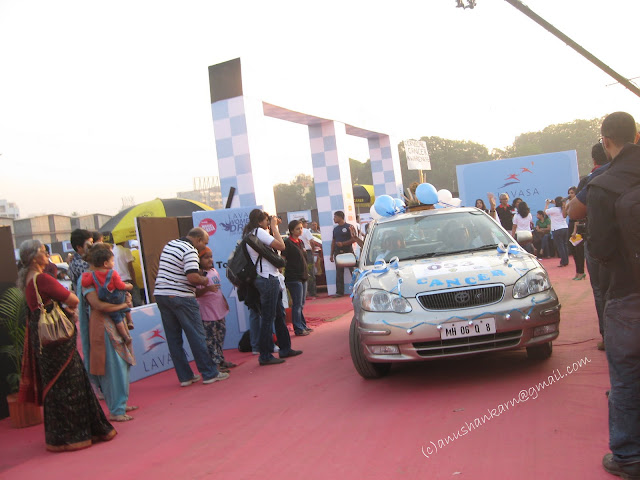 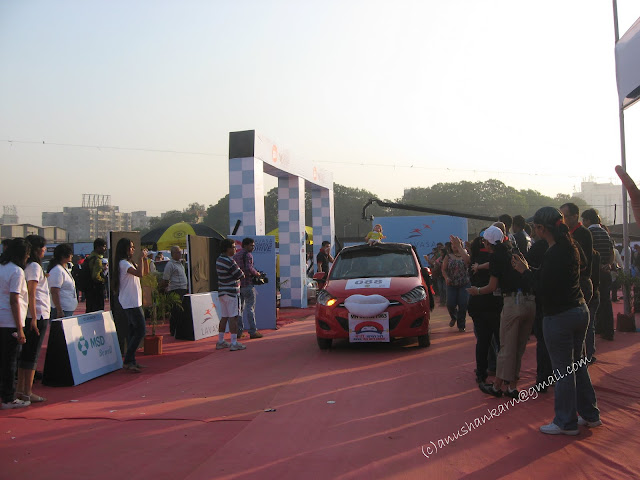 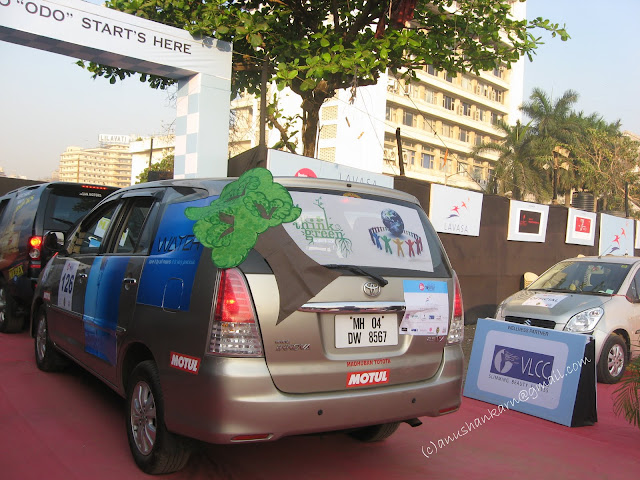 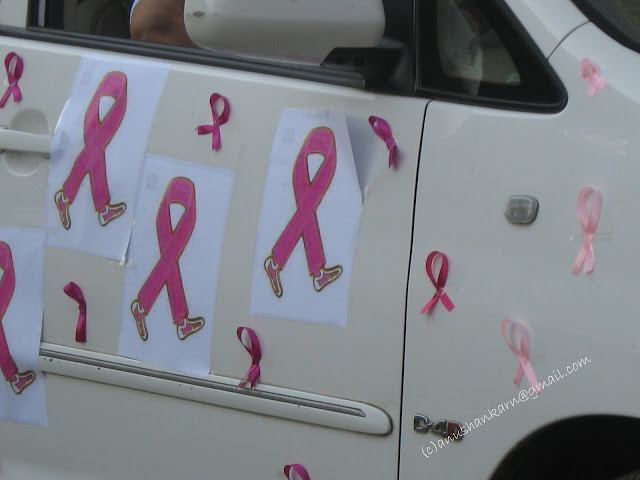 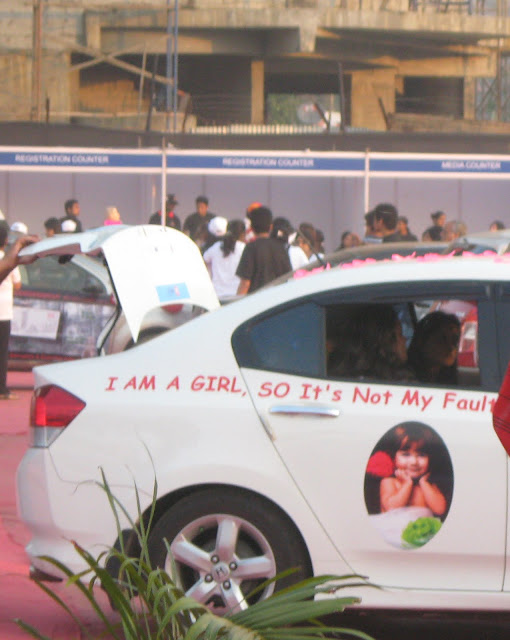 By the time Priya Dutt arrived to flag off a few cars, the crowd had thinned somewhat and I was at least able to see her. 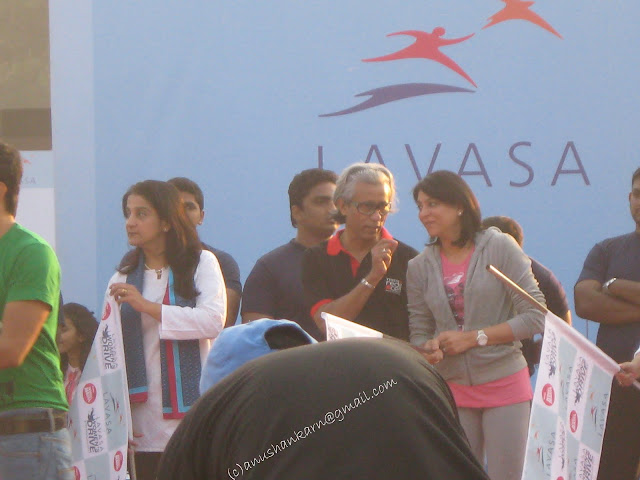 Soon, it was time for us to leave in the car arranged for us, and we headed off to collect our snacks and water, reminding us of those long-ago school picnics.
The five hour drive to Lavasa passed quickly, thanks to the animated blogging discussions in the car. We stopped for breakfast at the food court, and once back on the road, kept looking out for the rally cars and photographing them. 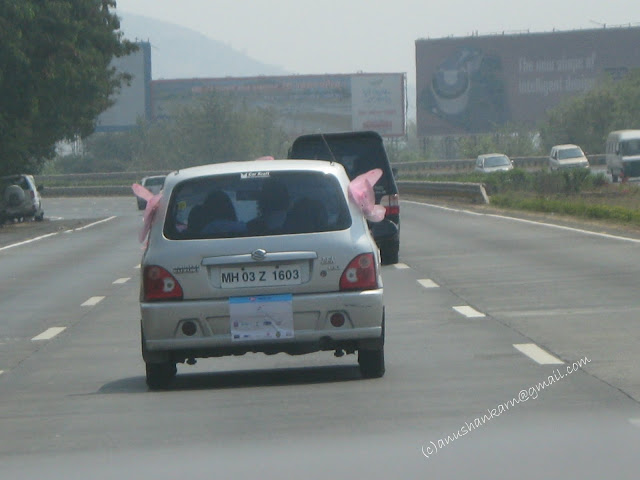 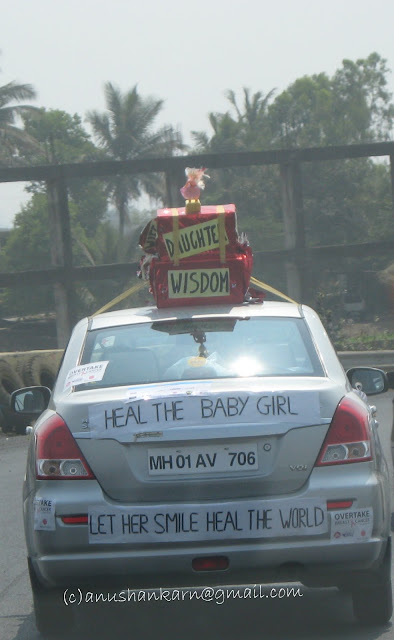 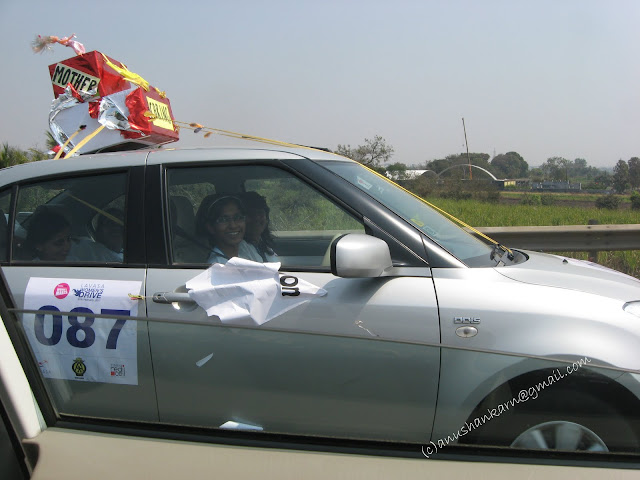 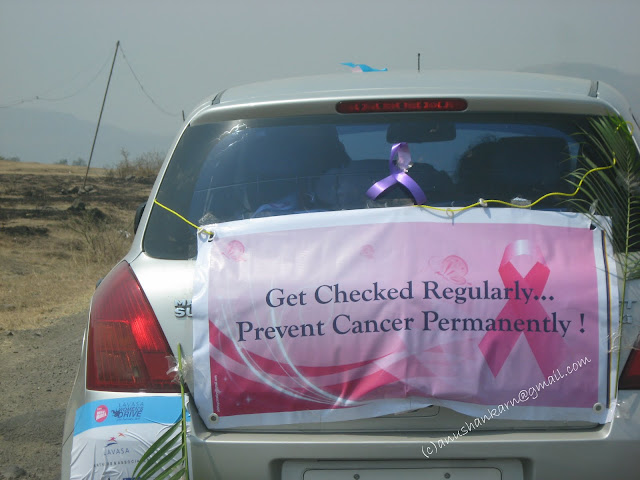 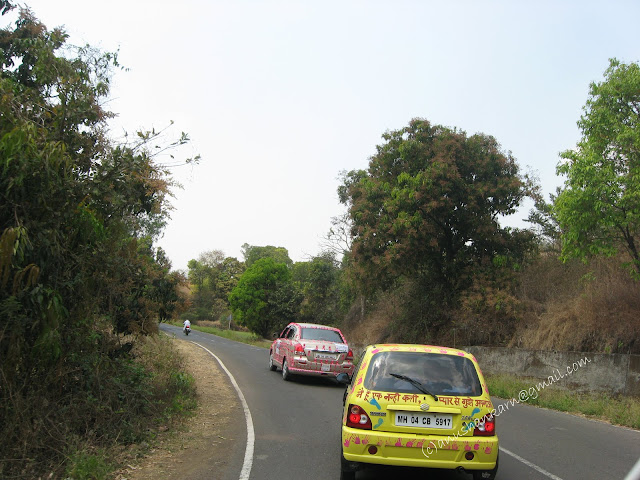 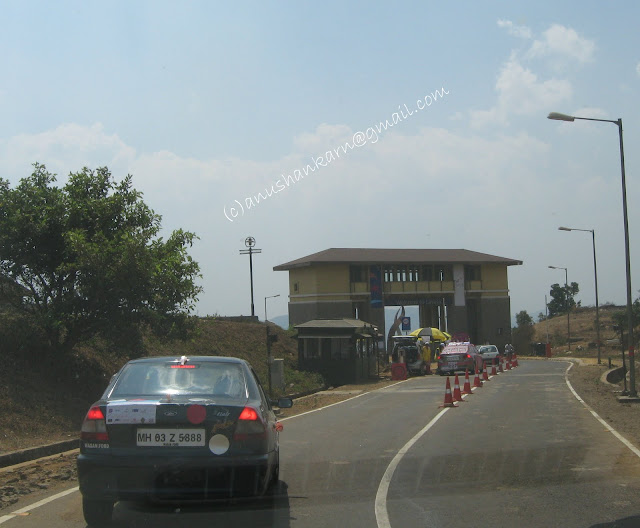 The Mumbai Pune expressway had made me forget about the sudden curves and steep ascents in the Sahayadris, but the stretch from Pune to Lavasa made up for it, as the car wove its way around the hairpin bends and my stomach lurched in reaction. I was thankful that I was able to make it to the washroom before throwing up the Kanda Poha I had for breakfast.
The scene at Lavasa itself was one of gaiety – just imagine more than 2000 women (sans their male counterparts) having a blast, and you will begin to get an idea of what it was like! As the music programmes went on, we ate, our empty stomachs crying out for attention, but by the time we were done, Mini Mathur and Maria Goretti had the stage, and they were entertaining indeed! I stood and heard them for a while, but was too tired, and had to check into the room assigned for us.
Our rooms were at the Waterfront Shaw, right on the promenade alongside the Lavasa Lake, and provided a great view of both, the promenade as well as the lake. The rooms were comfortable, and it was tempting to stay back and rest, but I was too excited to sit back in the room, and headed back to join in the celebrations. By then, the programme was almost over, but we enjoyed hearing the SQS Supastars perform their last few songs while the enthusiastic women sang along and danced! 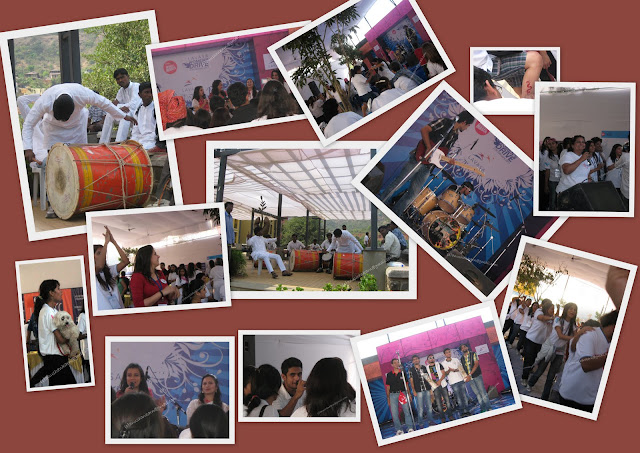 As the sun started to set, it was time for the party to end, and groups of women began to leave, heading back to Mumbai or Pune, while we took advantage of the relative calm and peace to wander about and take photographs.
All too soon, the sun set and it was time for dinner and bed. We had had a long day, and another long one would begin anew as the sun rose, so we turned in early, intending to sleep. It is another matter that amidst all the excitement, sleep was the last thing on our mind, and most of us spent the better part of the night chatting!

Amidst all this, if any of you were wondering about what Samhith did at home, well, he didn’t miss me at all the whole day, and had been remarkably well behaved, having free access to the computer without mamma being around to scold him. Night, however, was another matter, and he called up to say goodnight and promptly burst into tears! It seems he can sleep away from me anywhere, but at home, he will ALWAYS sleep only with me (those are his words, by the way!). How’s that for logic?
There are a lot more posts coming up about the Lavasa trip, so keep coming back!


Meanwhile, you can read what my co-bloggers wrote about the trip -