November 19, 2013
Over a foot long, it was longer than any centipede I had ever seen. Yet, it was certainly a centipede. That was the only thing I was sure of.

It did resemble the centipedes I had seen, except that those were tiny, compared to this. Those had bright colours too, but the red and black of this, coupled with its size, added a scary touch. It would surely be poisonous! 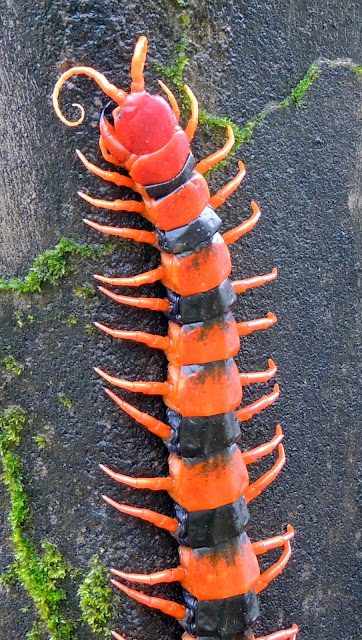 We saw this one at Jog Falls. Taking a break from watching the falls, we were walking around in the mist, when we saw a couple of people staring at something on the wall... and there it was. The thought that it was poisonous, plus its size, ensured that people didn't go near. The growing crowd brought a guard to the scene, and he then ensured that it was left alone, and that no one poked a stick, trying to make sure it was alive. 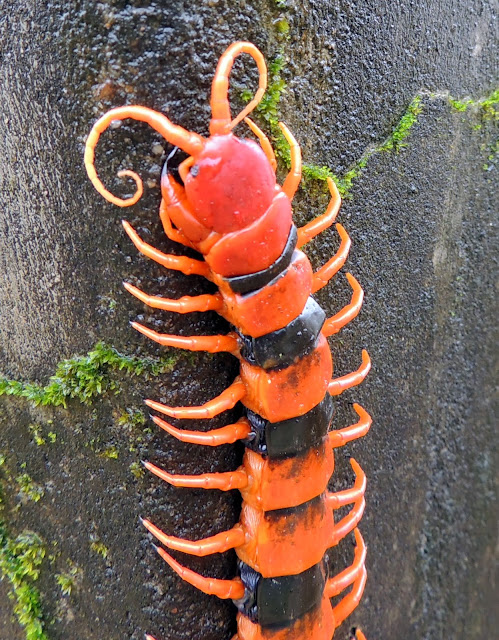 There was no doubt that it was alive, when, after a while, it seemed to become aware that it was  drawing more attention than the falls, and moved, disappearing almost immediately into a crevice with an agility one wouldn't really imagine from its size!

From what I found on the net, this is a tropical giant centipede, called the Indian Tiger Centipede. The name obviously comes from its colour, and from what I could find, it seems to be a common resident of the Western Ghats. Unfortunately, there is very little information available about it. If you know anything more, please do enlighten us!