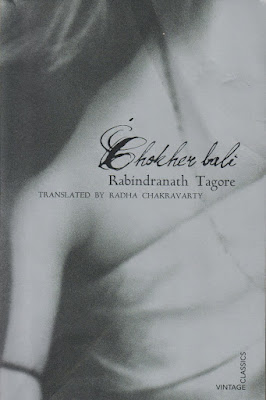 ‘Choker Bali’ was written by Rabindranath Tagore as a serial in the periodical Bangadarshan from 1902 to 1903. In 1903, it was published as a book. In its preface, Tagore wrote

“The literature of the new age seeks not to narrate a sequence of events, but to reveal the secrets of the heart. Such is the narrative mode of Choker Bali.”

Reading these words today, a hundred and ten years after they were first written, I wondered if I am qualified to review a book by an author such as Tagore, and above all, such a path-breaking novel like this one, even if it is only a translation. However, having taken up this unenviable task, all I can do is put forth my thoughts on the book, and leave you to judge me, as well as the book for yourselves.

‘Choker Bali’ literally means ‘a grain of sand in the eye’ Used as a metaphor for a constant irritating presence, the title beautifully sums up the story. The cover of the book too is well designed, depicting just a hint of sensuousness, a thread which runs through the story as well.

The novel has been much translated over the years, and Radha Chakravarthy, in her introduction to her version of the story, helpfully gives us an idea of what to expect. She puts the setting and characters into context, effectively bridging the gap of the century between the writing and the re-telling.

Coming to the story itself, it is only after I read it, that I understood just why this is considered to be the herald of the ‘Modern Indian Novel’. There is no plot and no happenings to speak of – just the characters, and their lives, entwining and separating. The narrator is a third person, but the characters speak for themselves. There are few detailed descriptions of the characters, but they come alive through their words and actions.

The characters are from a time long gone. A century is a long time indeed. And this century saw too much of change – political, ideological, and above all, technological. We have come a long way since the time Tagore created his characters. Yet, as I read the book, I couldn’t help compare the characters to people I knew, to the people in my life. We all know people like Mahendra and Bihari, Asha and Binodini, even Mahendra’s mother and aunt. The story could well be happening today, in some part of India, or even the world, so timeless does it feel.

With such few characters, it was inevitable that I was immersed in them almost as soon as I began the book. I wondered, as I read, whom I would like the most, by the time I completed it. I had never thought I would identify myself with one of them – after all, among the female characters, the mother and aunt were too old, Asha was simple and uneducated, and Binodini was a widow, albeit well read, but living in seclusion. It came as a big surprise to me, that I identified myself with both.

It is debatable about who is the heroine of the story. It is thought that Tagore originally wrote the story with the working title, ‘Binodini’, which probably means that he meant the story to revolve around her. However, the fact that he changed the title to ‘Choker Bali’ – a phrase which Binodini chooses to represent the bond between herself and Asha, suggests that both women are the foci of the story.

Binodini is obviously one of the strongest characters. She is well read, adept at household tasks, is beautiful, as well as a model of perfection. Yet, her being a widow keeps her secluded and away from every temptation. It is almost inevitable that a lonely woman reading as much, and as varied stuff as Binodini does, should be tempted to put her wiles to work, to test her power over people, to feel the passion she so craves to experience.

Asha is the complete opposite – meek, simple, illiterate, and also unable to run a house like Mahendra’s. She has no control over events in her own life – whether it her life with her relatives, or her marriage to Mahendra, or her inability to handle the situation at Mahendra’s house – be it his passion or his mother’s antagonism.

Between the two women, it is Binodini we feel more for. After all, a woman who takes her life into her own hands is to be appreciated and encouraged. Yet, it is Asha, who, by the end of the book, comes across as the stronger one. She is the one who handles the situation with a courage, which seems to come from nowhere. Yet, when you think of the lives of Indian women, it is not so inexplicable. Even the meekest of women gets courage, when she is left with nothing more to lose. The fact that this situation only comes when she loses all she has, speaks more of our society than anything else. I couldn’t help but wonder if Tagore meant for Asha to grow like she did. Or, did she surprise him too? Is that why he chose this name for his book?

Being so preoccupied with the female protagonists, the males seemed to me, just props for the story. The story would be incomplete without them. They are the reasons for the thoughts, temptations, conflicts and clashes. Yet, they are the weakest among all. They neither have the courage to stand up to their convictions, nor the grace to withdraw from the stage silently. Their very presence exacerbates the situation, sparking more discord and trouble. Between the two male characters, Bihari is the more evolved. Mahendra is the very essence of the Indian male so prevalent even today – spoilt and egotistical.

I have read little of Tagore before, and each time, I have wished I could read his original work. This time it was no different. Radha Chakravarthy has done a wonderful job with the translation. The essence of the story and the characters does come through, which, I imagine, is the main purpose of a translation. The language is easy to read, and though the characters speak English now, it is easy to imagine them speaking in Bengali. In that sense, the spirit of the language has been retained. However, from what I have heard of the original, the beauty of the language would have been quite a different story altogether. That, unfortunately, is something I can never experience, so I am thankful to the author for rendering a translation I can enjoy.

This book was sent to me for review by Random House. The views expressed are my own.