A Weekend with Lego

November 01, 2013
Imagine… huge boxes of Lego bricks, all separated by colour, ready for building, to be scooped to the floor, to build what you have in mind. Wouldn’t you call that a Lego enthusiast’s idea of heaven? For us, this vision of heaven becomes a reality, every time a Lego event arrives at a Mall near us! Our first experience was two years ago, when we attended the Lego Fire Truck building event, and we had another fantastic time last week at the Lego Train building event, both at HighStreet Phoenix Mall at Parel, Mumbai, held in association with Hamleys and Funskool. 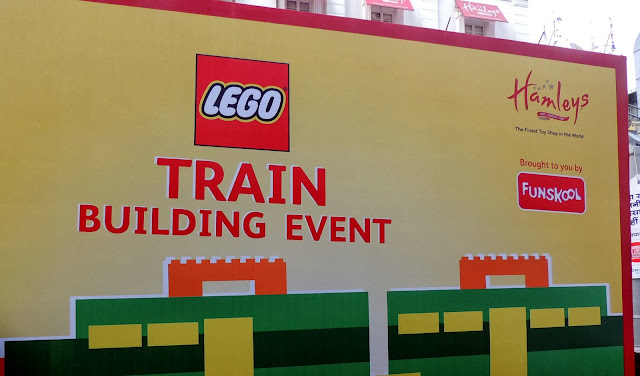 My fascination with Lego goes back to my own childhood, when the few Lego bricks I had, were a prized possession, and reluctantly given away only when I grew up and realised that we really had no space in the house. That was almost three decades back. Today, samhith has a BIG box filled with his Legos, and we desperately try to make space for more! Which is why, we look forward to events such as these!

This time, the folks at Lego decided to build a train, or rather, just an engine, due to the space available. It was a 3 day event, but we weren’t able to make it on Friday, the first day. We made it to the mall by Saturday afternoon, by when we realised that the base and the sides of the train were almost ready! We had little to do but settle in and help out as much as we could. 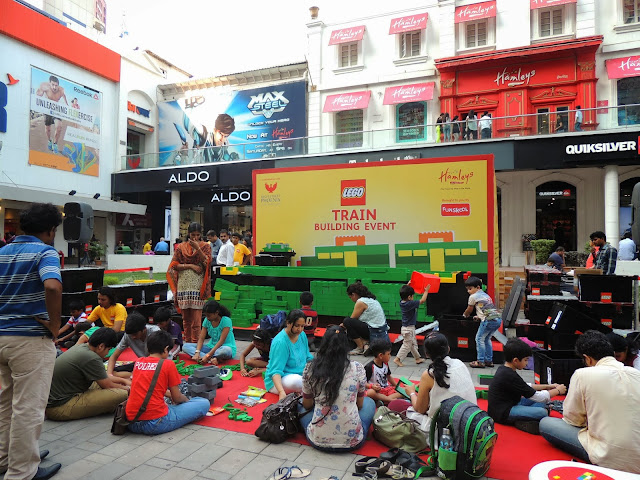 Surrounded by blocks, we were soon busy with work, helping out by making blocks of specific sizes. It took a while, but once we got used to it, our fingers flew, as did the time.

Meanwhile, the train grew too. 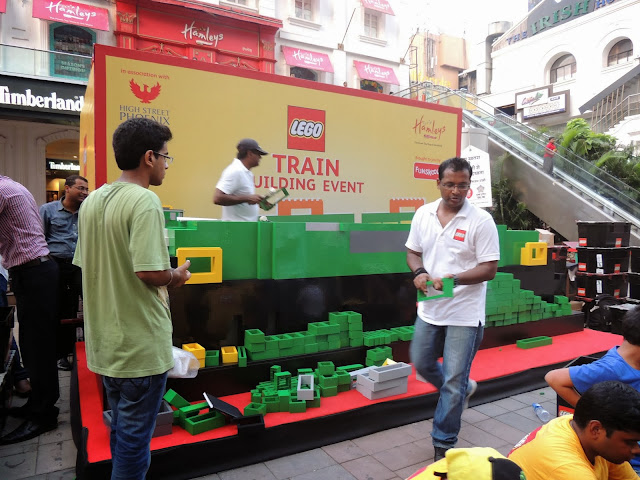 The two grown up Lego- enthusiasts – John Seemon and Dominic David, busy with their plans, making sure the right block fit into the right place, that nothing went wrong.

By the time we left, at 8 PM, almost all was ready. All the pieces they needed were done, all they had to do, was fit them together.

When we arrived on Sunday morning, this was the sight that greeted us….

The train was ready, all set for viewing, and we happily posed with it, and its creators, before the crowds arrived. 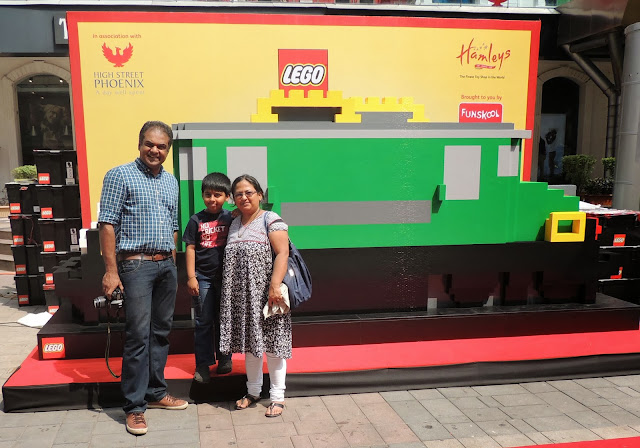 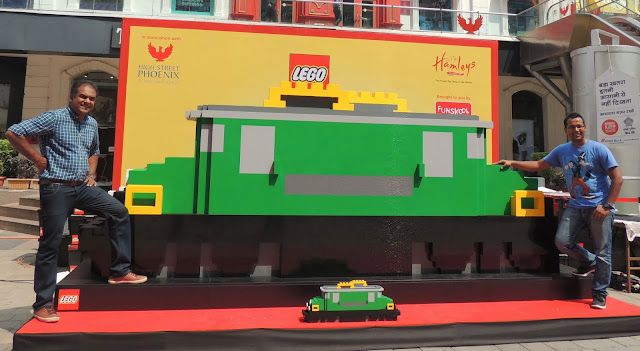 Even more fascinating than the train were its creators. John, we had met before, the first time. We knew already of his love for Lego, and over the past two years, have seen, online, some of his creations. Meeting Dominic was a first this time, and it was a pleasure to know that there are such enthusiasts in Mumbai too, with our space crunch and all!! We gaped over Dominic’s photos of his creations at home, and over his creations at the World of Lego in Hamleys. 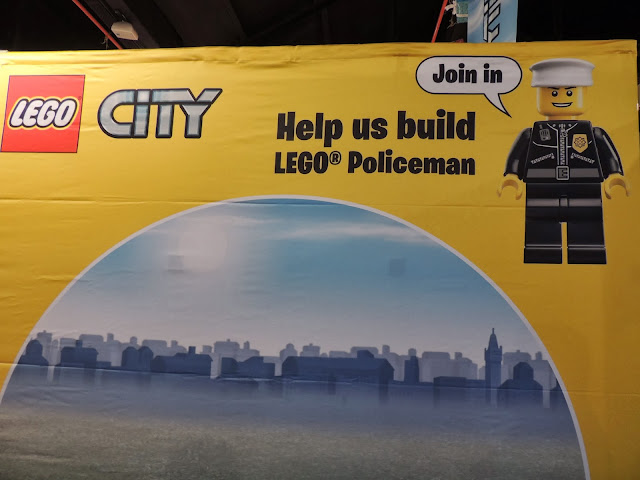 And that is where we went to, next – to Hamleys, where a Lego City event was to be held. The idea was to fill up the plan of a city with buildings, vehicles and people, based on the City series of Lego blocks. Here again, a huge pile of Lego bricks greeted us, unfortunately, not sorted out this time, which made things a bit more difficult. But once again, the kids (and parents) were in action, building all sorts of things, both, sticking to patterns, as well creating their own. 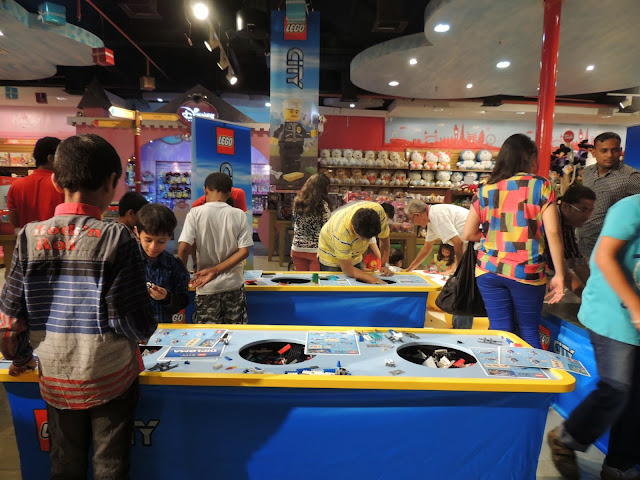 Yes, Samhith did his bit too… making this tiny cycle…. 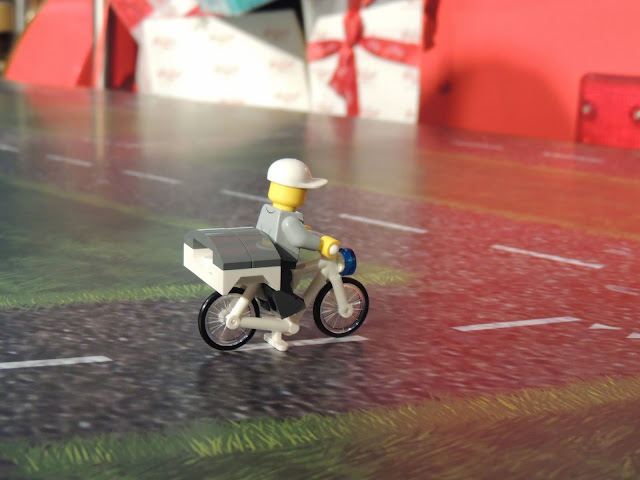 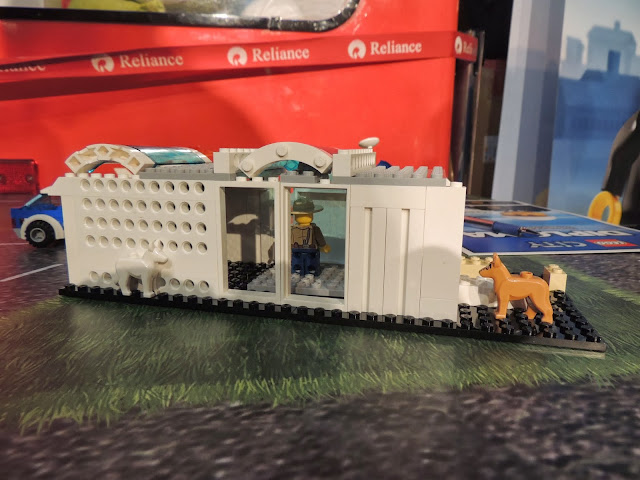 Once again, he proudly posed for photos… 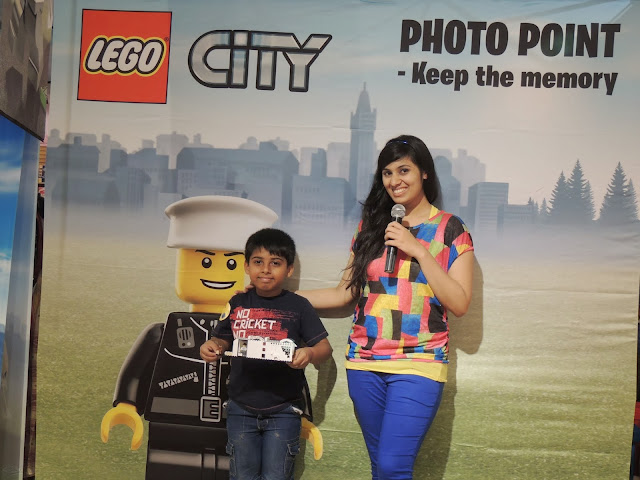 And late in the afternoon, after having spent almost 2 whole days there, we left for home, but not alone. We had goodies galore from Lego, which Samhith is now busy building… and we carry back our memories of all the wonderful people we met. I hope we have many more events in the future that we can participate in. Are you listening, High Street Phoenix, Lego, Hamleys, and Funskool?