November 27, 2013
A flash of white in the window captures my attention. From this distance, all I can make out is a figure standing. I don’t have binoculars, but my camera serves me just as well. The zoom lens shows me a figure, dressed in white, a red sash tied neatly across, a government official of some sort, talking to a policeman. It suddenly strikes me how apt the situation is. At one time, this was a palace, where the king and his ministers would have had conversations with his guards and officers. Today, it is the District Collector’s office, and it is a government official conversing with a police officer. Once again, how apt! 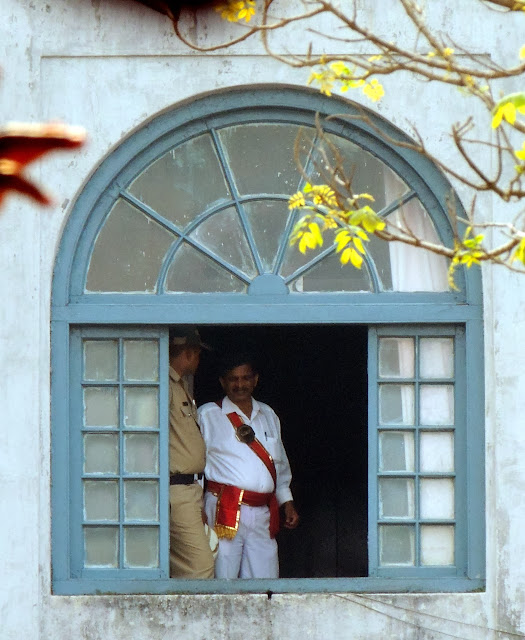 The DC office I am standing outside was once the erstwhile palace of the Kings of Coorg, situated within the strong walls of the Madikeri fort. As a tourist, I can only explore part of it. I am not allowed anywhere inside, for every space available indoors is still in use, albeit as government offices.

The fort is an imposing structure, located right in the centre of Madikeri town. However, there is little here to tell us of the king who made this town the capital of Coorg – Muddu Raja. That was some time in the late 17th century. Since then, the fort has seen a lot of changes. It was first captured by Tipu Sultan, then recaptured by Dodda Virarajendra. The fort was further modified by Linga Rajendra, only to finally fall under British rule in 1834.

Efforts have been made to preserve the fort. The lush green lawns invite us to sit awhile and gaze at the sight, and the two life size elephants standing guard make me wonder where they originally stood, and if there were more such decorative elements in the fort. Walking on the ramparts of the fort is a pleasure, and my son happily runs over them, even as I pick my way carefully. Under the rampart is a path leading inwards, but an official standing inside stops me as I enter, saying it is the entrance to yet another office. My son squeals excitedly as he stands on the arch above me, making his way to a niche which looks like it may once have served as a guard’s lookout point.

A simple Ganesha temple is probably the oldest, but most visited part of the fort. Closed when we entered, it soon shows signs of life. Almost every person leaving work stops by the temple before going their way, and most visitors stop too, for a second look.

In complete contrast is the church located in the complex. It was built by the British when they took over the fort. More than a century later, when they finally left after independence, they stripped the church of its belongings – the altar, the cross, everything that could be removed. Today, the church is a hollow echo of its past, used as a museum to house relics found in the area, with a single Karnataka ASI official sitting guard, proprietarily ordering people to keep their hands off the displays. The stained glass on the wall behind what was once the altar is the only reminder that we are in a place of worship.  That the fort sees many visitors is evident. However, there seem to be few who show an interest in the names of people engraved in the church – the original patrons, or so we were told by the ASI official, his happiness at having an audience clearly evident.

Lost in the past, we have spent more time at the fort than we have intended, and, in the process, we have missed seeing the sun set. However, I have no regrets – for the sunset point would have been packed with tourists with cameras clicking away. Here, in the fort, I have had a slice of history, all to myself, even if just for a little while.

This was originally published on the Club Mahindra Blog. You can read the original article here.