Around Gwalior - The Temple complex at Batesar

August 17, 2016
The rutted road led up to an inconspicuous gate. Our driver stopped and nodded towards it. “You can go in. I will stay here” he said. “Don’t you want to come in?” I asked, and he laughed. “Madam, there is nothing to see, just broken temples. Hardly anyone comes here. You can go and see for yourself that there is nothing much to see.” I could have told him that we were here to see just those ruined temples, that they excited us more than new temples did. But I kept quiet and let him settle down for a nap, while Samhith and I walked in, to see the Batesar (or Bateswar or Bateshwar) Group of Temples.

Beyond the gate was a different sight – a neatly laid garden welcomed us, and a path led up to what appeared to be just stones piled all over. A discarded pair of shoes reminded us that this was a temple complex, and while we might hurt someone’s sentiments walking in with our shoes on, we weren’t about to walk amidst the ruins barefoot.

All around us were ruins of temples, big and small, grand and simple. There are believed to be around 200 temples here, built from the post Gupta to the early Pratihara period, from around the 6th to 9th centuries. 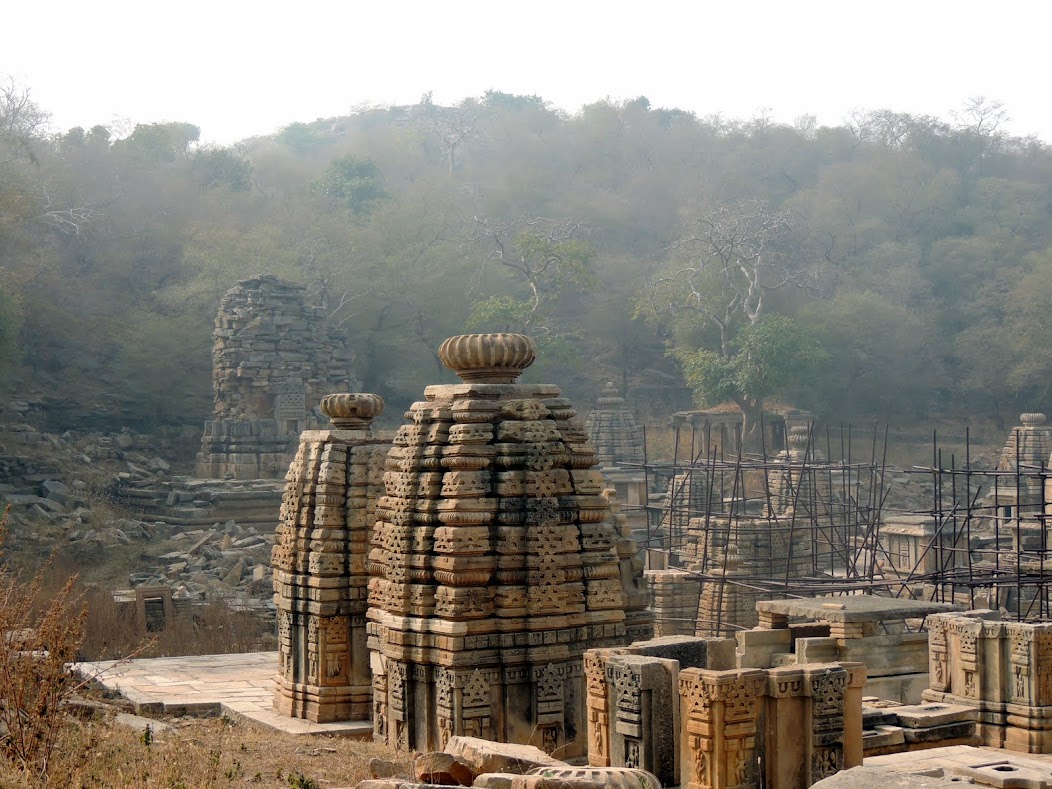 The temples show the gradual development of temple architecture during the period, from the single shrine, to the construction of more detailed Shikaras, and mandapas, to multiple shrines being combined into one bigger temple.

There are temples to both, Shiva as well as Vishnu here. While the Vishnu image might have stood against the wall of the sanctum, there is a central pedestal in some of them, indicating the space where the lingam would have once stood. Hardly any shrines have their deities though, and are just empty, though with enough sculptural detail to capture and hold our interest.

The most common figures on the walls are Parvati in panchagni tapas, in the south, Kartikeya or Surya in the west, and Ganesha in the north. The corner niches have the Ashta Dikpalakas.

They aren't, however, the only deities. There are many many others too!


Almost all the door frames have the river goddesses Ganga and Yamuna on the lowest levels, accompanied by umbrella bearers, and sometimes Dwarapalakas.

On the base of the door frame are lions and elephants... 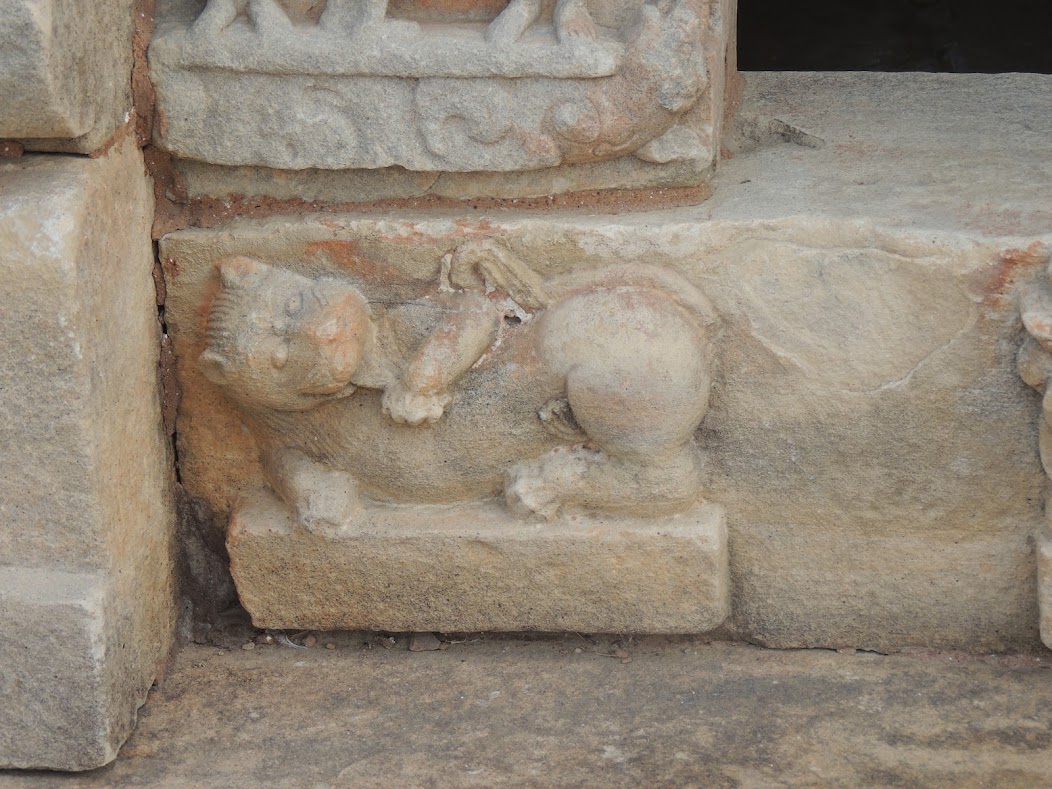 On the lintel, in most cases are the Navagrahas (the nine planets), the Dashavatars (the 10 avatars of Vishnu) or the Saptamatrikas (the seven mothers, accompanied by Veerabhadra and Ganesha), or, at times, all three! Here are a few….


It is also interesting to see that almost all the shrines, whether of Shiva or Vishnu, have Garuda on the lintel, holding what appears to be a crown, and sometimes  a snake.

Many of the temples also have the figure of Lakulisa holding a danda or rod, indicating the strong presence of the Lakulisa sect here.

On the Shikara or spire are some very interesting depictions of the gods, usually a form of the deity enshrined within.

I loved this depiction of Nataraja….

And these two faces…. Probably a depiction of Shiva, going by the hairstyle…. One smiling, one frowning! 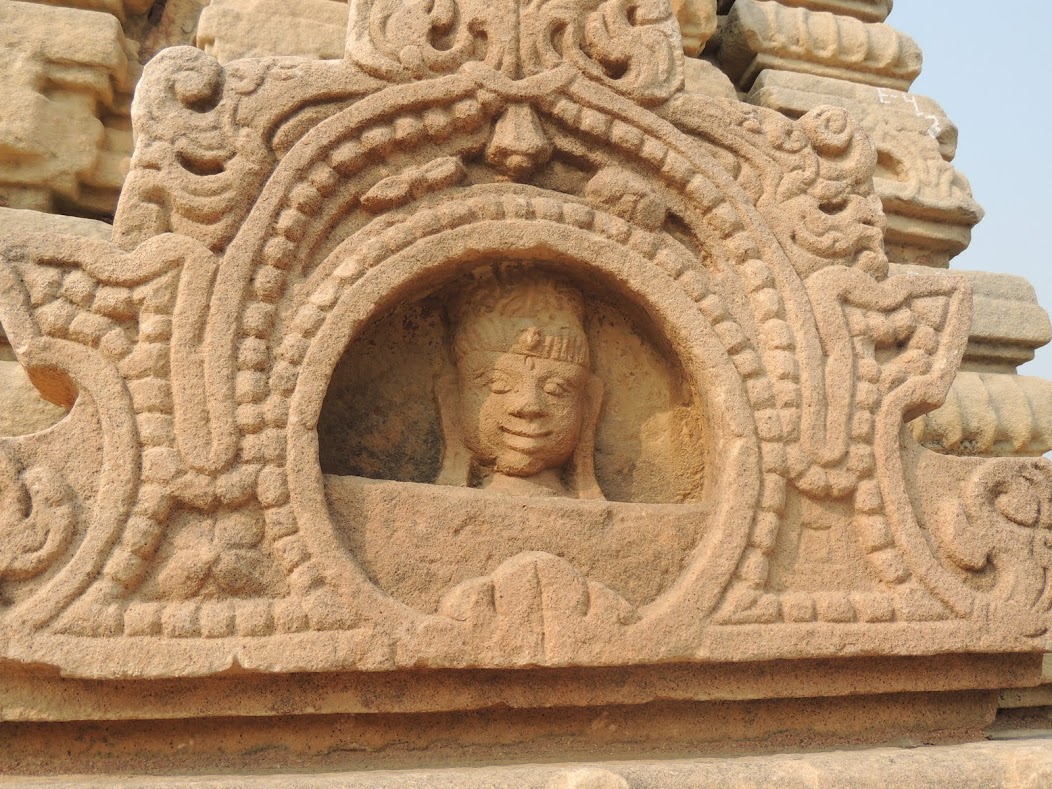 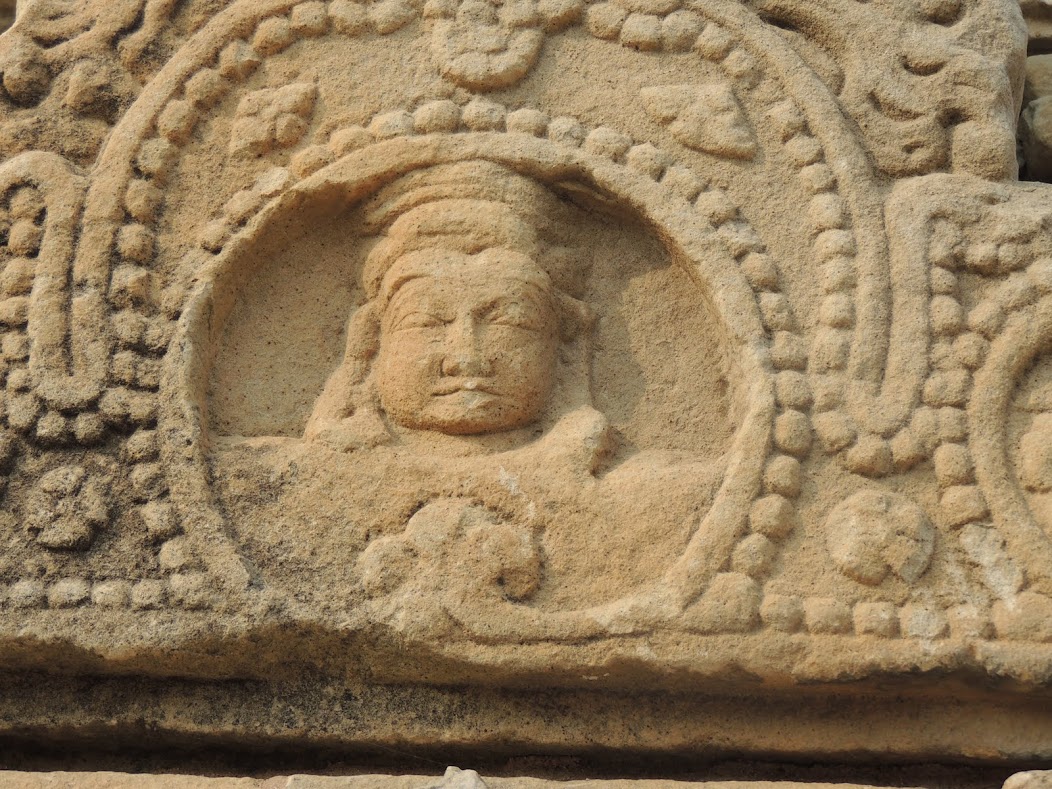 The biggest temple here is the Bhuteshwar or Bhutnath temple. It is believed that the word Batesar is a corruption of the name of this temple. 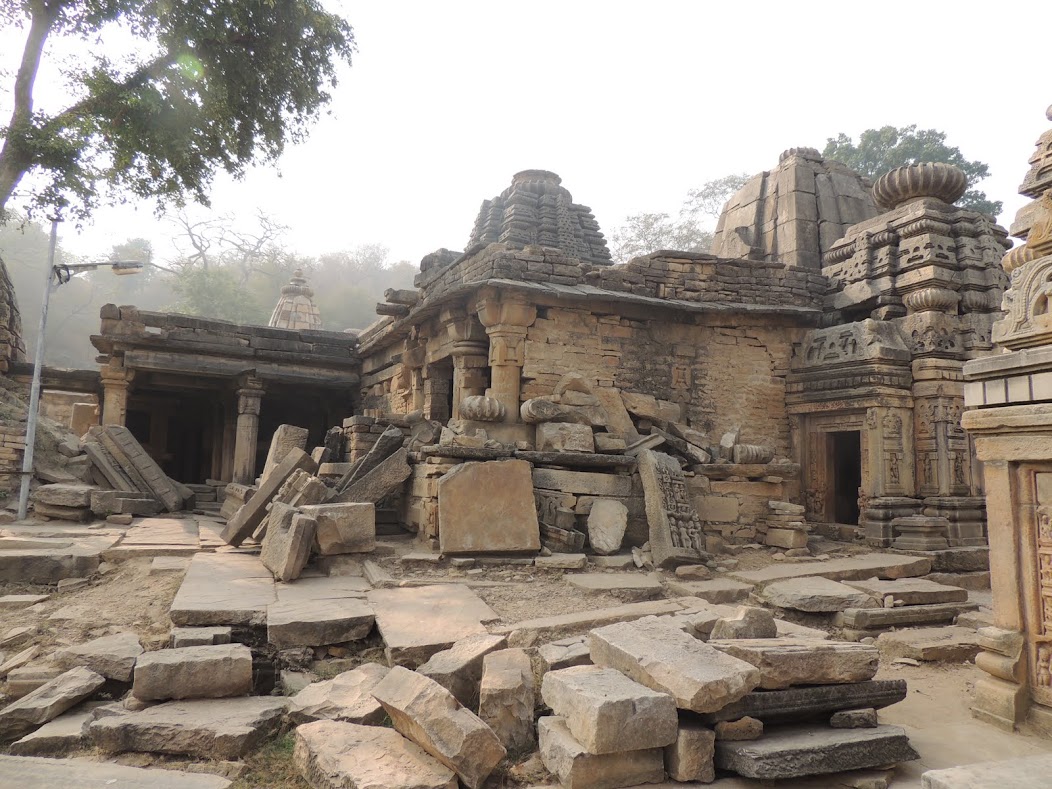 This is the only living temple in this huge complex, the one which draws locals for prayer. There are eleven shrines in all, of which one is the main shrine and the others are subsidiary ones. The temple seems to have been built over some of the shrines, and is quite interesting.

Sadly, it was in a bad shape when we visited, dark and dank, and also slippery. The condition of the sculptures inside is also a sad sight, and I couldn’t wait to get back outside.

The sculptures on the outside of this temple, though rough, are extremely interesting in their depiction.

This Hanuman, stepping on Kama and Rati (depicting his control or victory over the baser desires)  is one of the biggest statues found here, and has been covered in Sindoor, and is under worship as well. 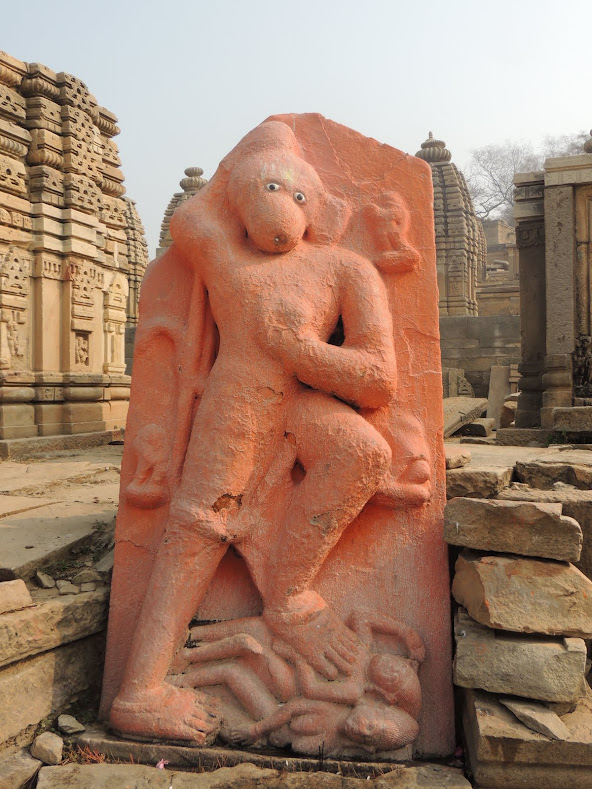 The stepped tank near the temple is still in use too, and though the water appears green, is used by people who live here. 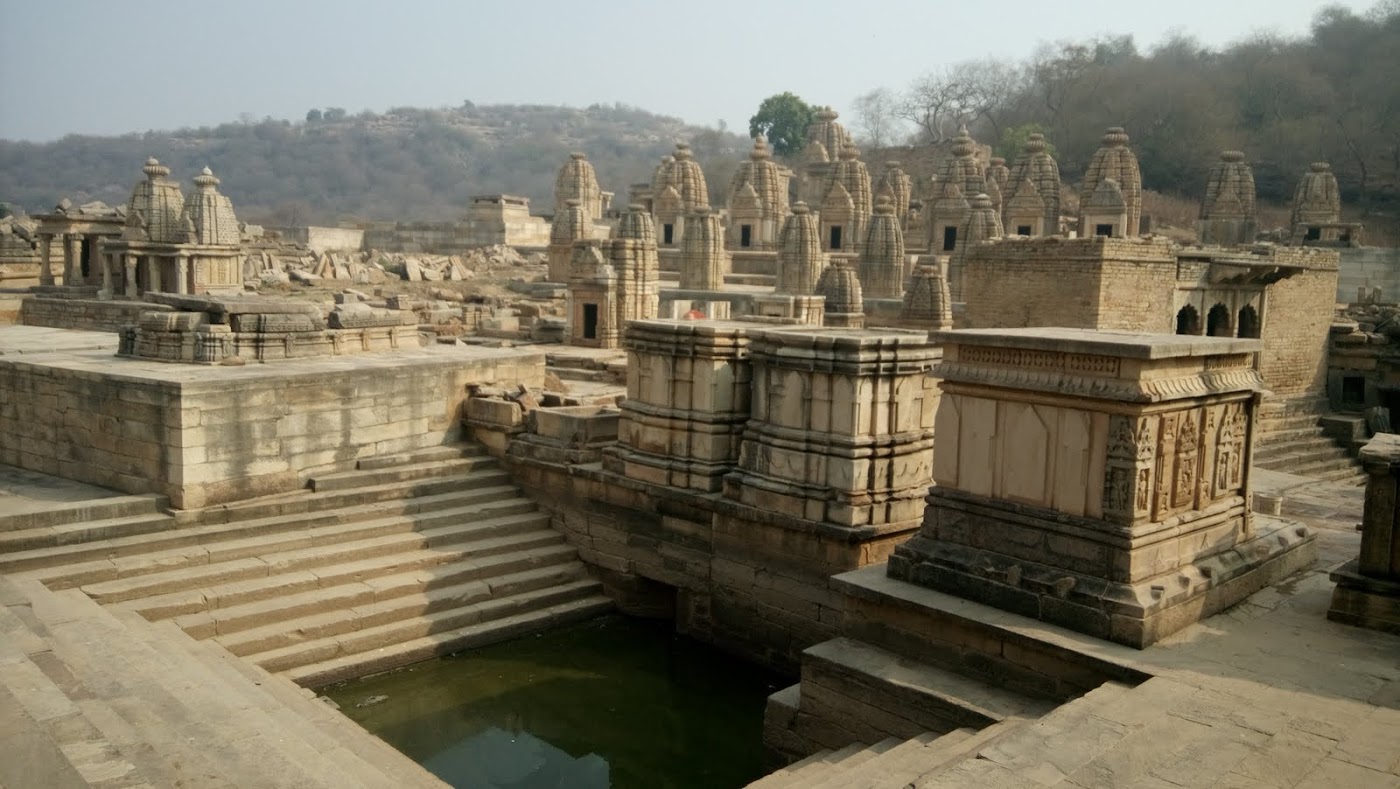 Yes, there are people living here. A few seem to be employees of the ASI, but there are also priests and their families, making a living out of the Bhuteshwara temple and a few new shrines they have set up with the sculptures found on site. 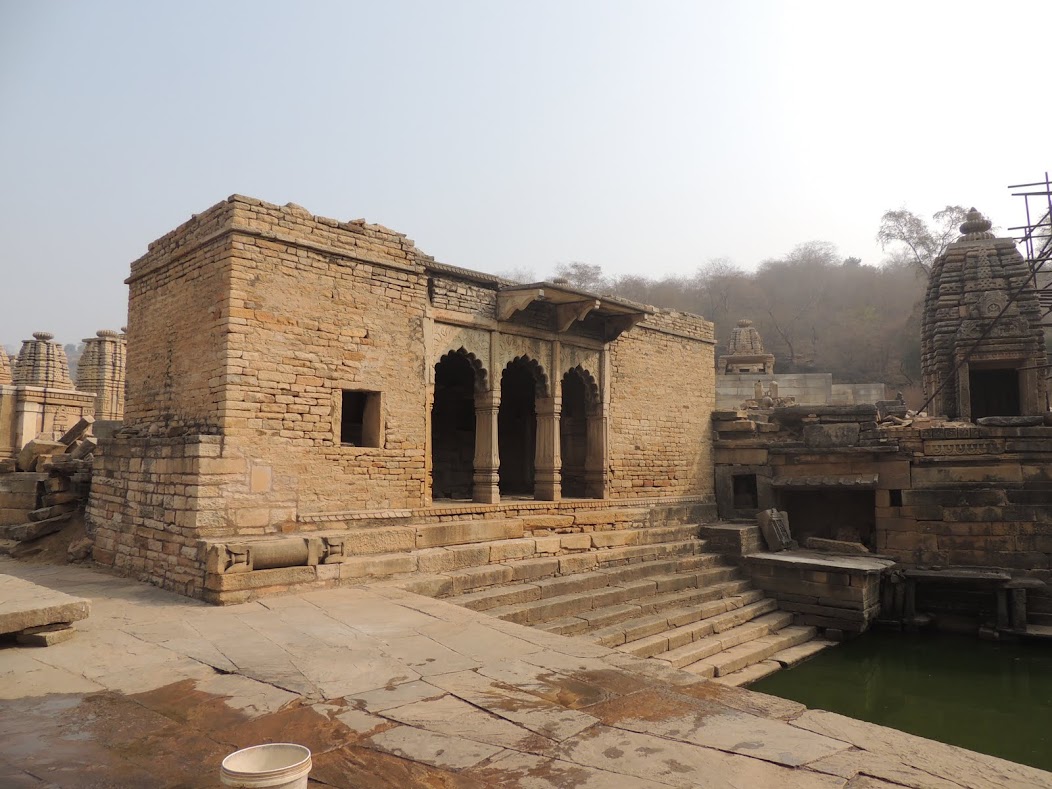 The restoration and rebuilding of the temples also seems to have resulted in a few new structures coming up, as well as new shrines within them. We were clearly marked out as tourists, and therefore uninterested in worship, which was a relief, since no one approached us asking for offerings.

While I wandered from temple to temple, lost in the details and excited as a child when I saw something new, Samhith walked through the complex once and devoted the rest of his time chasing peacocks and looking for their feathers to collect!

As we finally gave the temples one long look and decided to leave, a man came running up, with a bunch of peacock feathers in one hand, and a well-thumbed notebook in the other. He handed over the feathers to Samhith with a smile, and handed me the book, asking me to write my comments. It turned out he was the caretaker, and he enthusiastically told me how the entire site was just a pile of ruins when the ASI first came here.

All the temples we were able to see and appreciate, were the work of the ASI, which had painstakingly put the stones back together, trying to restore each and every temple here. Work has been going on for years, and is still on, albeit at a slower pace now. We kept chatting, of the people living here, of the festivals when locals turned up, and of the belief that all these temples were offerings of a kind, built by the patrons, either praying to the gods for a wish to be fulfilled, or thanking him for a wish fulfilled. He told us of the peacocks, which were used to them being around, and the animals which sometimes found their way here, such as Nilgai, which we had seen on the road ourselves. It was reassuring to see his enthusiasm, his love for these temples, and the desire to see them restored. When we offered him money, he refused, but finally accepted, saying he would use it to light lamps at the temple for us.

It was the fitting end to our journey here, for what are temples for, but to pray, and ask for blessings, after all!

By the time we walked back to our car, our driver was up and impatient. No one he knew had spent so much time at these temples, he said, and wondered what had kept us there so long. And with a satisfied smile, we settled in to tell him, before we reached our next destination!

Note: Special thanks to Saurabh of Puratattva.in for writing in great detail about these temples. Without his post, I wouldn't even have been aware of them.

Here are some more photos of the site...