Some more temples in Ujjain 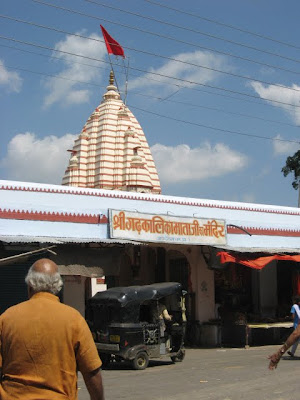 This temple dedicated to the Devi has its roots in ancient times, and is related to the story of Kalidasa, one of the foremost poets of ancient . It is believed that Kalidasa was a simple and stupid, but a handsome lad, who was devoted to Kali (hence his name, which literally means – the servant of Kali). His looks attracted a princess who married him, only to be soon tired of him, and ashamed of his illiteracy. In his anguish, Kalidasa is said to have prayed to Kali who blessed him with immediate knowledge by herself writing the sacred ‘’ on his tongue. Eventually, Kalidasa wrote some of the best known plays, and became the greatest of the ‘nine gems’ in King Vikramaditya’s court.

The Gadkalika Devi temple is believed to be the one where Kalidasa turned from ignorant to poet-laureate. The temple is a simple and unassuming one, having been re-built a number of times, but it is set in a peaceful and serene area, far removed from the bustle of the city. 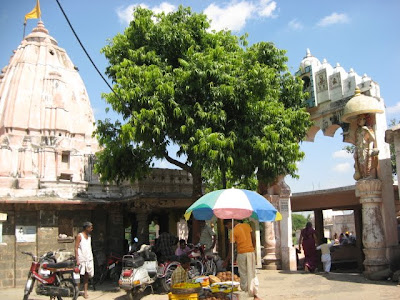 Many holy places have sacred trees associated with them, and among them, the banyan is certainly the most revered.  The banyan especially is linked to the performance of rituals linked to death, and the most famous of all such trees is the one at , where millions congregate to pay obeisance to their departed forefathers. 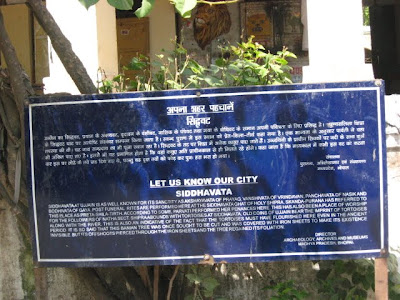 One such tree on the banks of the Shipra is known as the Siddhavat (Siddha – immortal, vat-banyan). This tree has an interesting story attached to it – it is believed that the tree’s origins lie in the days of yore when Parvati meditated here, but history and legend mix when we are told that Aurangzeb not only ordered the tree uprooted and the stumps burnt, but also covered the area with iron sheets to prevent the tree from growing back. In spite of all this, we are told that the tree grew and flourished again, in the process becoming a sacred entity. This has resulted in the trunk of the tree being covered with sindoor and enclosed by a small temple with an opening at the top for the branches. As I stood and watched the procession of pilgrims paying obeisance to the tree, I could not but help wonder if the tree which had survived such difficult times would survive all the atrocities in the name of devotion. 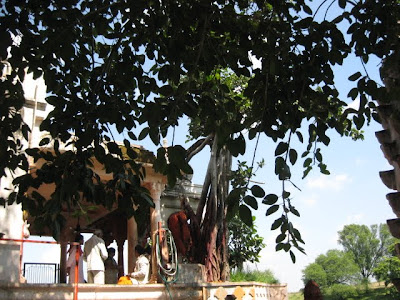 The ghat on which the tree stands is a typical one, which could stand at Kashi or any other holy place in . All around us were people performing rituals for the departed, some getting their heads shorn, some praying to the river, while others fed the poor. This was apparently an off-season for pilgrims, being the Diwali week, so I was happy I visited the place when it was still comparatively deserted. 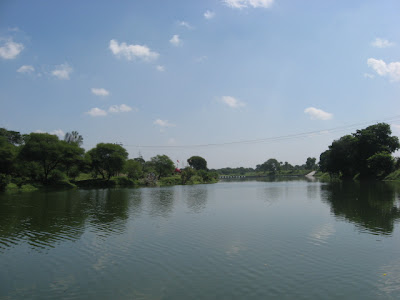 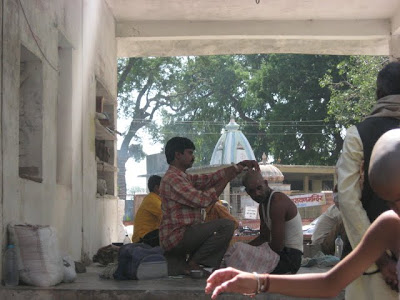 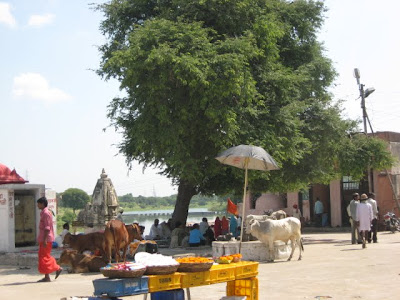 Feeding not just people, but animals too...... 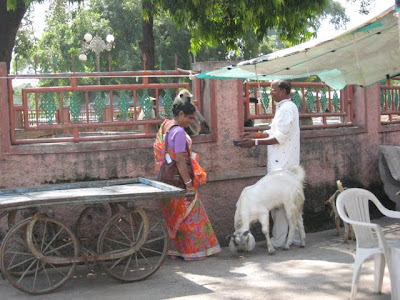 Believed to be the birthplace of Mangal – the planet Mars – the temple is not an impressive one, except for its location, which is a small hillock on the banks of the river, and the view from the temple gives us an uninterrupted view of the river. Of course, the beauty is now marred by the filth in the river, a condition which is now prevalent in almost all the holy rivers of our country. 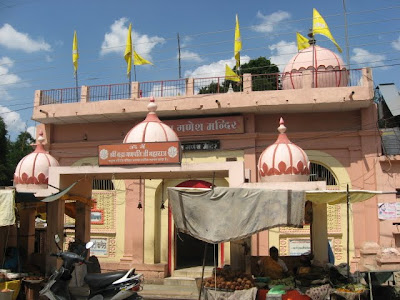 This is a small temple right opposite the Mahakaleshwar temple, known for its huge Ganpati. 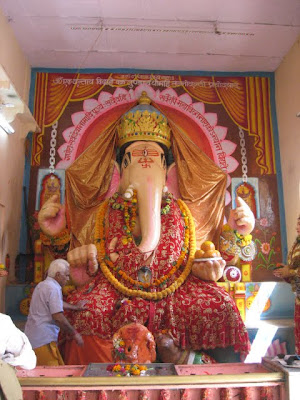 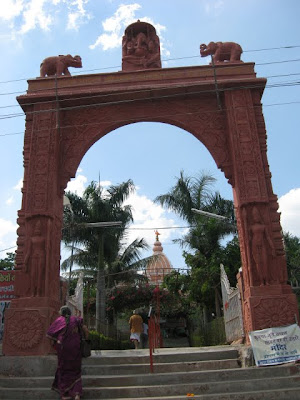 This temple is a new one, built to provide pilgrims with darshan of the deities of the four holiest places in – the Char (4) Dham – Rameshwaram, Badrinath, Puri and Dwaraka. 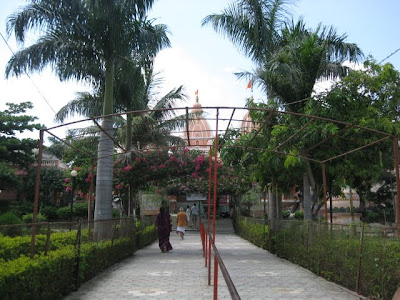 While I was not too impressed by the deities (which in no way resemble the originals), Samhith liked the temple because of the sprawling grounds, and also a tableau set up depicting ’s life. Paying a charge of Rs.5/- per person we went through a tunnel-like structure, in which were glass cases in which were depicted episodes of Krishna Leela. Samhith enjoyed the spectacle of a moving Putana pressing the baby to her breast, falling down and then rising to depict the scene again!!!!

This is another new temple, inspired by the recent TV serial dedicated to Shani Dev – the planet Saturn. In these days of blatant wrong doing, it is no surprise that the most revered deity should be the one who is said to give one the fruits of their actions – good or bad. It is no wonder that people rush to appease the lord and hope for a favourable glance from him!

The vehicle of Shani is supposed to be a crow, and so it is in all the temples of Shani that I have visited, all over . I was, therefore surprised to see that here, Shani was depicted on an elephant. I couldn’t resist pointing this out to the pujari, and received an interesting answer which shows us how temples are built in these days. 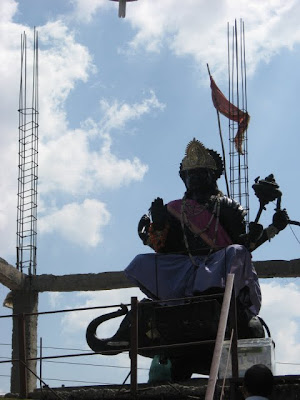 According to the pujari, this temple has been built for the purpose of ridding people of financial worries, which are, of course, of prime importance today. Since the elephant is the vehicle of Lakshmi, the goddess of wealth and prosperity, Shani Dev has been depicted here with the elephant as vahana. Further, the pujari informed me, all the other Shani temples in have the idol of black rock. Here, it seems, the idol has been made of iron, the metal most loved by Shani, hence the idol was more powerful! 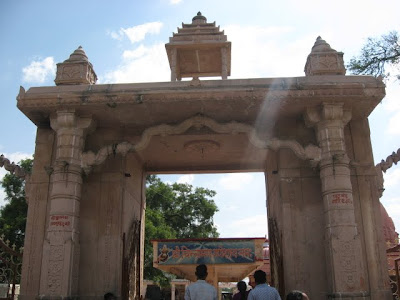 The Chintaman Ganesh Mandir is an ancient temple, believed to date from the 11th century. Even today, the temple is peaceful and serene, and is considered one of the most important temples of . The idol of Ganesha here is not a carved one, but a swayambhu (self made), and is accompanied by Riddhi and Siddhi, his wives. 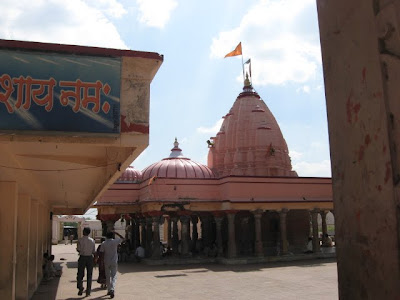 Situated at the confluence of the Shipra with the (this is the name of the river as given on the website of the Mahakaleshwar temple. No one at the temple knew the name of the river. When I asked a few people, they asked me why I wanted to know!!!!), the Navagraha temple is believed to be an ancient one, though no one seems to have any idea of its origin. 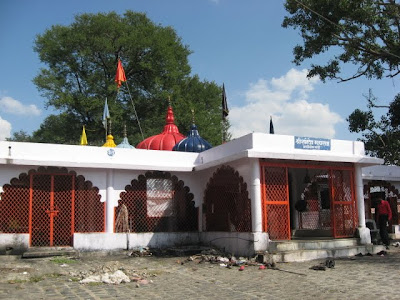 The temple is a small one, with nine square rooms set out in a 3X3 matrix, thus 9 big rooms with a swayambhu idol of each planet at the inner corner, the central room with an idol of Surya (Sun). The main door opens into the sanctum of Shani, and then we circumambulate the temple, viewing all the other planets through the open doors.

While there is nothing architecturally interesting about the temple, it is located in what would have been a beautiful place once. Today, of course, devotion has turned the place into pilgrim haven, shops selling all kinds of things, from food to toys and of course, puja materials. The river looks good from a distance, but a step closer reveals the leftovers of rituals littering the place, turning the river into a garbage bin. 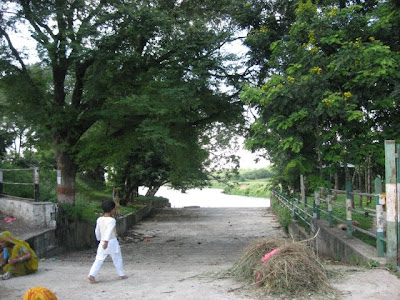