Temples in and around Sringeri


Sringeri is a small village with the Ashram dominating it. However, the area is steeped in ancient history and mythology. Sringeri gets its name from the sage Rishyasringa, who resided in these forests. In fact, the roots of this holy place go back even further, to the sage’s father, the sage Vibhandaka, who meditated here.


As the legend goes, the sage Vibhandaka was deep in meditation, and the King of the Gods, Indra, wanted to disrupt his penance. He sent the divine damsel, Urvashi, to tempt the sage. She succeeded, and the result of their union was a child. It is said that the child was born with a slight protrusion like a horn or an antler, hence was called Rishyasringa – the deer sage. Urvashi, her work done, returned to her abode in the heavens, leaving the sage to care for the child alone. The sage was now filled with anger against all women, and brought up his son all by himself, in his haven in the forests. Thus the child grew to be a man, completely out of contact with all humanity, oblivious to the existence of women.

Meanwhile, in the region of Anga (present day Bihar), there was a severe drought, and the royal preceptor advised King Romapada that only the arrival of Rishyasringa would bring rain to his kingdom. Romapada had one daughter  - Shantha  (it is said that she was the daughter of King Dasaratha, adopted by Romapada) – and he sent her to bring the revered sage to his kingdom. Shantha set off accompanied by her retinue. They expected to find a sage, but found instead a young man who looked exceptionally handsome. However, their surprise was nothing compared to that of Rishyasringa, who had never seen such a beautiful person before. He was completely bowled over, and, his father being away, agreed to set off for Anga at once. Hardly had he set foot in Anga, that the rains began, and quenched the thirst of the parched land. The king was so happy that he offered his daughter’s hand in marriage to the sage. Rishyasringa was only too happy to accept and he lived with his wife in Anga for some time. It is said that when King Dasaratha wanted to perform the Putra Kameshti Yagna to beget a son, it was Rishyasringa he approached. The sage presided over the yagna, which resulted in the birth of the four princes of Ayodhya.

Once Rishyasringa felt he had lived enough in the material world, he went in search of his father, accompanied by his wife, Shantha. They searched high and low for him, but the sage had moved, grieved over the loss of his son. They eventually located him on the banks of the Tunga river, at present day Sringeri, deep in meditation. They served the sage while he lived, and, after he passed, they settled nearby, and spent the rest of their life meditating on Lord Shiva.

The lingam that sage Vibhandaka prayed to, is enshrined at the Malahanikareswara Temple at Sringeri. The name Malahanikareswara means ‘destroyer of the impurities of the soul’. The temple stands on a small hillock amidst the bustling market of Sringeri. It is so small that you can barely glimpse it over the shops, hotels and lodges that have turned up in recent times, yet once you enter the temple complex, is so peaceful that we forget that the market is just at the foothills! The only ones who disturb the peace here are monkeys!! 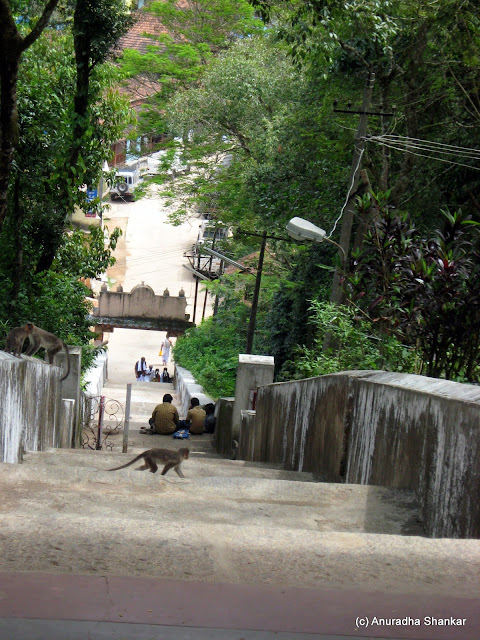 At Kigga, about 10 Km away, is another temple – the Sringeswara Temple. This is where Rishyasringa and his wife Shantha spent the better part of their lives meditating. The lingam here is shaped like a rudraksha, with a horn like projection on the top. It is believed that both, Rishyasringa and Shantha merged with the Lord together, and this lingam symbolises both of them. It is said that prayers to Sringeswara ensure plentiful rains.

Sages seem to have been drawn to Sringeri, even after the lapse of aeons, because, after Vibhandaka and Rishyasringa, it was Adi Shankara who came here, and, on the banks of the Tunga, set up his ashram. He installed the idol of Sharada, a form of Saraswati, the goddess of learning, to preside over his temple of learning. To protect her, his students, and their knowledge from harm, he set up temples for guardian deities in the four directions on the perimeter of Sringeri.

In the west is a shrine dedicated to Kere Anjaneya (Hanuman) 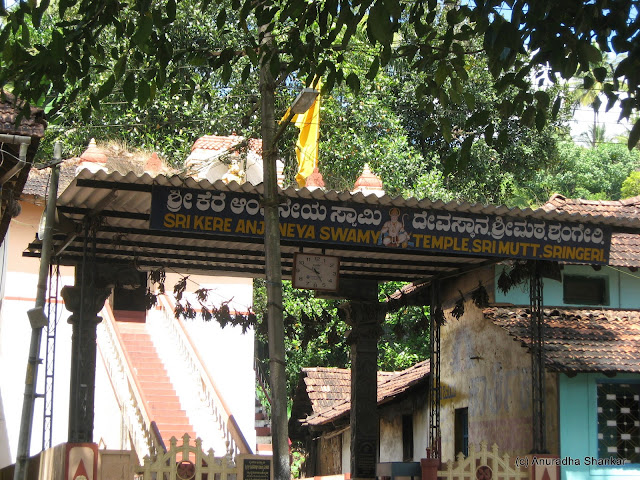 In the south is a temple dedicated to Durga 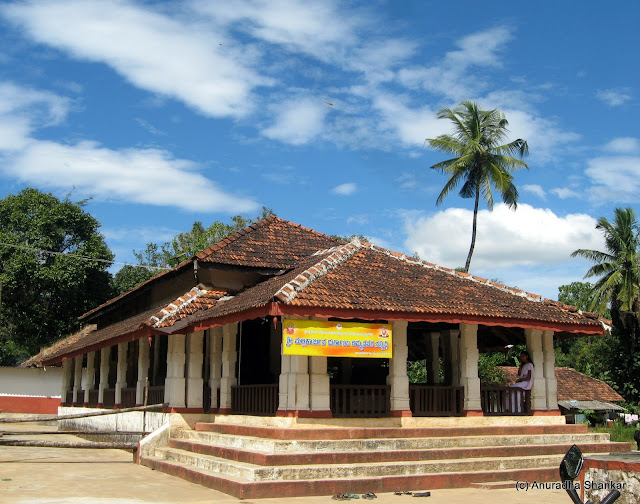 In the north is a shrine to Kali. 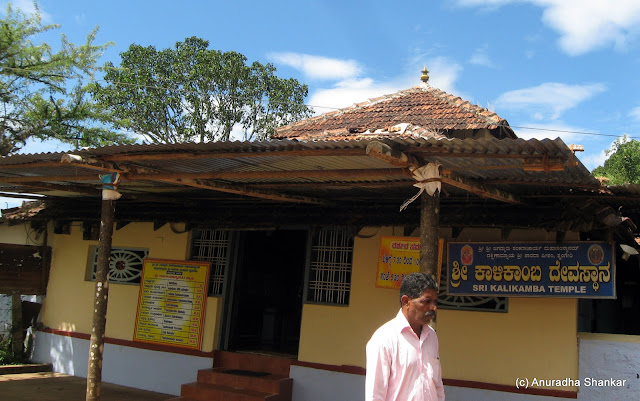 And in the east is located a temple to Kala Bhairava, the fierce aspect of Lord Shiva. (I was trying to get a photo of this temple, when I spotted a Giant Wood Spider, on one of the trees around the shrine. Fresh from my experience in Corbett with Karthik, the spider drew my attention at once, and I forgot all about the temple!! So, this is the only shrine I have no photos of!!! And yes, I do have a photo of the spider, which I shall post some other time. A spider doesn’t really fit into a post about temples, does it?)

The four shrines to the guardian deities, and the Malahanikareshwara temple are all within walking distance of the Sringeri Sharada Temple. Kigga is 10 Km away and plenty of autos are available for the trip. The best way to see all the temples in the shortest time is to hire an auto for visiting all of them. The entire trip takes less than 2 hours, including time spent at the temples.

By Road: There are plenty of buses to Sringeri from Bangalore, Mangalore, Udupi and Shimoga.

By Train: The nearest railway station is at Udupi, on the Konkan Railway, and Shimoga on the South Central Railway

By Air: The nearest Airport is at Mangalore.

Where to Stay: The Sringeri Sharada Peetham provides plenty of accommodation for visitors. No advance booking is permitted, but accommodation is provided on a first-come-first-served basis. There are a huge number of rooms, including AC and Non AC rooms, as well as dormitories.
There are also many hotels and lodges in the area.

Where to eat: The Ashram offers food to every devotee, though at stipulated times.. lunch and dinner. There are also plenty of hotels in the area. However, the best option is one of the many messes, which are basically run in houses. The food is home cooked, and simple. Not much variety is available, but what is available is excellent and tasty.