Gwalior. The name, it is said in legends, comes from the sage Gwalipa, who lived here in the 8th century.

The sage would have lived here in peace, without any fame accruing to him, if it wasn’t for the prince, Suraj Sen. The prince, suffering from leprosy wandered lost, in search of a cure. Arriving here, he met the sage, who asked him to bathe in a lake nearby. Lo and behold, the prince rose from the lake, cured of his disease. The sage asked for no fee, except that the prince build a wall atop the hill, to protect the sages who lived here, from the wild animals of the forest. The prince kept his word, naming the place after the sage, and so began the story of Gwalior Fort. At one time, it kept its inmates safe from the wild animals, but as the years passed, the fort grew as did the town, the wild animals disappeared and the fort now protected its inmates against their very own kind. The fort has seen innumerable battles, has stood strong, and given way, and yet stands to tell its tales.

The stories of the fort, and the land it protects, are many and varied. The hill itself, once called Gopachala, had settlements on and around it since prehistoric times. The region has been ruled by almost every clan in Northern India, from the Maurya-Sungas, the Hunas, the Nagas, the Gurjara-Pratiharas, the Kacchapaghatas, the later Pratiharas, the Delhi Sultans, the Tomars, the Mughals, and finally, the Marathas and the British. Every single one of them etched their identity on Gwalior, and on the fort, and this is what makes Gwalior Fort such an interesting place. There are so many stories, to be heard, and to be told, and this post is nothing but my own feeble attempt, to tell the story of my visit. It is, by no means complete, so, as you read further, please do keep in mind, that this is Gwalior Fort, as seen through my eyes, and not necessarily a guide to the fort itself.

Our driver dropped us at the parking lot of the fort, and we were besieged by guides. The Audio Guide apparently, was unavailable, and we had no choice but to hire one of them. We finally settled for one of the older men who had a license, and entered the fort complex. Instead of entering the fort, our guide led us to the Amphitheatre built opposite, for the sound and light show, and began with the story of the fort. Even as I listened, with half an ear, to stories I already knew, my eyes strayed again and again, to the distinctive blue, green and yellow tiles which covered the outer walls of the Man Mandir palace. 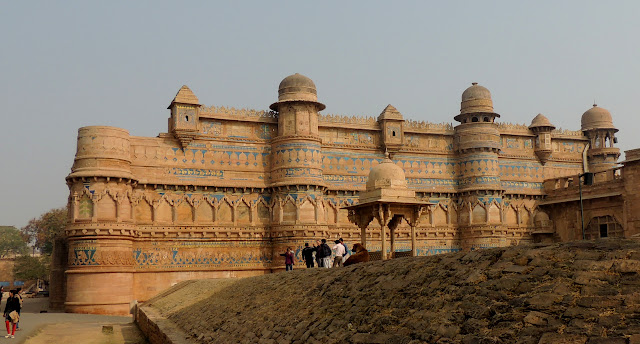 The Man Mandir palace was built by Man Singh Tomar (1486-1516), and the four storeyed structure is a triumph of architecture, with two storeys above and two below the ground. The outer walls are covered with beautiful tiled work, depicting all sorts of animals and birds – tigers, lions, leopards, elephants, parakeets, ducks and monkeys, and even mythical creatures such as makaras.

On the inside, the two levels over the ground have exquisite works on the inner walls, including some amazingly detailed jaalis or lattice work. The jaali which covers the balcony of the dancing hall, so that women could see the performance without being seen, for example, depicts dancing girls!

And even the brackets which hold the ceiling together are carved to resemble elephants and peacocks, a recurrent theme. 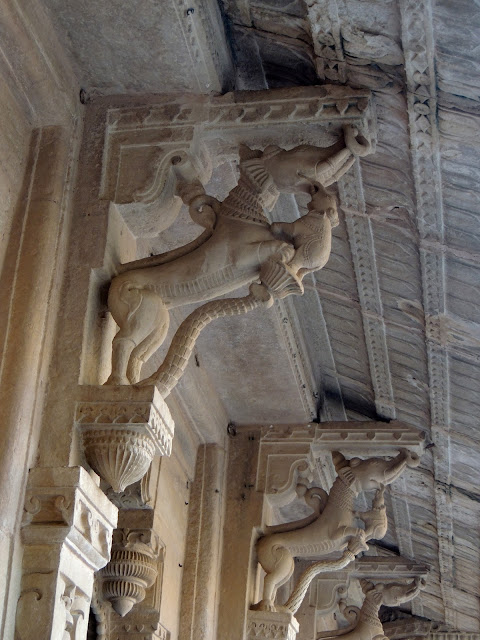 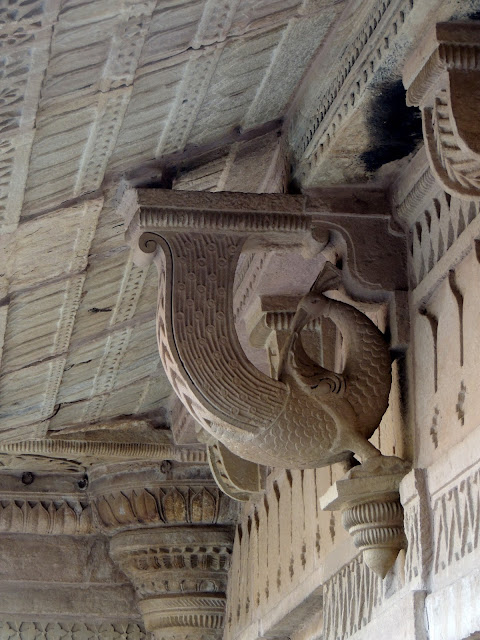 If the top two floors are intricately designed and decorated, the lower two are simple to the extreme. However, here, the detail lies, not in ornamentation, but in design, allowing air flow, light, as well as communication with the outside world! Passages are cunningly designed to let in air and light, while keeping out arrows, thus making the subterranean levels extremely well protected from all sorts of danger. At the same time, hidden pipes allow for communication, between the rooms, as well as the upper floors.

However, the very same features led to the use of these subterranean floors for purposes other than originally intended. They were built to be used by the king to relax with his wives, with water pools and swings. However, once captured by the Mughals, they were used as dungeons, to hold, torture as well as execute prisoners. Among the most famous members of royalty to be held and executed here were Kamran, a cousin of Akbar, and Murad, Aurangzeb’s brother.

Awed as I was by the brilliant design of these subterranean floors, I also felt extremely claustrophobic. Surprisingly, relief arrived in the form a bunch of architecture students visiting from Punjab, on a field trip. Their voices and excitement changed the atmosphere completely, and I could imagine the place as it once had been, bustling with happy voices, songs and laughter.

Coming out of the Man Mandir, I realized that so far we had seen just one monument within the fort. The long wall we had seen from outside, and the various domes and spires we could see, hinted at many more. And, sad to say, I was already tired from the high steps of the subterranean floors. But our excitement was high, and we were eager to see the rest of the fort. Would these other monuments be just as interesting as this one? Wait for my next post to find out!