I first heard of prehistoric cave paintings at Anegundi through Lakshmi’s blog. It was especially interesting, since I was then planning a visit there, and decided to add it to my agenda. We had seen prehistoric cave paintings earlier at Lakhudiyar, on our trip to Binsar, and wondered what it would be like, here. As our rickshaw driver drove along the roads lined with hillocks on one side and fields on the other, I thought of the differences between the two places.  Lakhudiyar, though situated amidst the hills, was located among the only outcrop of boulders in the area, which had no foliage covering it. The rock overhanging the cave was shaped like the hood of a snake, and was distinctly visible, even from a distance, while here, there were boulders everywhere, and I couldn’t even begin to imagine which one of them had been the abode of our prehistoric ancestors! 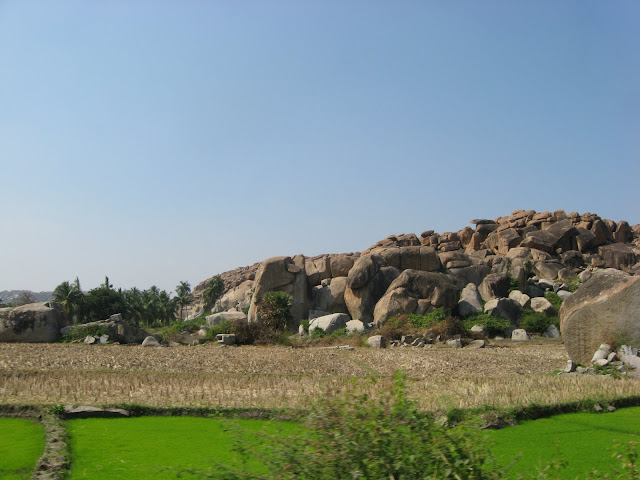 When we finally stopped, it was right at the edge of a field, and I wondered for a minute if we had reached our destination or the driver had stopped to relieve himself! Seeing me hesitate, the driver asked me to get down, saying that we had reached. Shankar didn’t seem too impressed, and refused to join us on our quest, opting instead to spend some time in relative peace in the field without the non-stop chattering of Samhith and me! 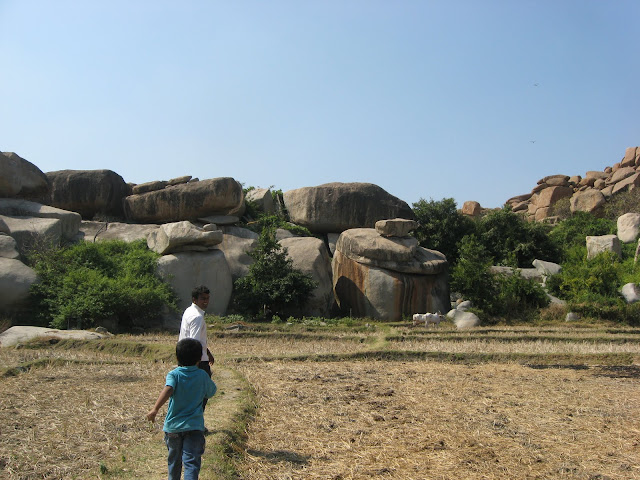 Leading us to a section of rocks bordering the field, the driver showed us a narrow path we had to take. The first thing I did was to keep my camera inside so that it would be safe while I clambered up. 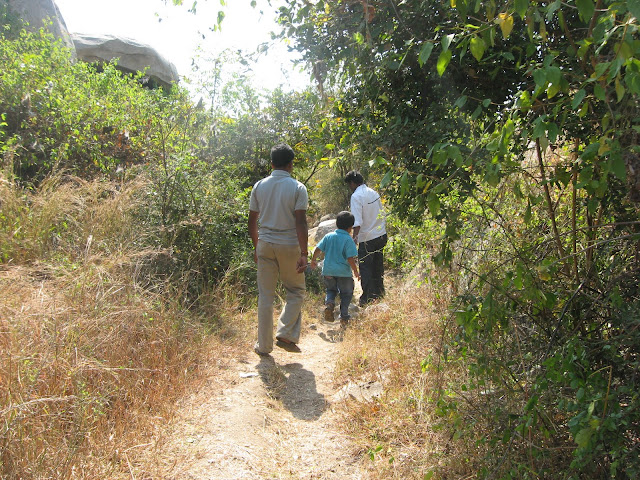 Samhith was in front of me, climbing up much more easily than I could, and the first thing he did on reaching up, was to stumble and fall! No, he didn’t get hurt, but he fell on his knees, right on some fresh cow dung, and that remains, for him, the highlight of the trip! (He still remembers the pant which got soiled, and avoids wearing it, even though it has been well washed a number of times since!) The next few minutes rushed by as I managed to clean him up with some grass and my kerchief, and then a passerby led him off to some water which had collected in a puddle nearby, so that he could clean himself. it was only then that I had time to look up and realize that we were standing in a clearing atop the boulders we had seen on the road – it was a sort of a plateau, hidden by the boulders, but with many more scattered here and there. It seemed the kind of place our ancestors would have come to, looking for safety. 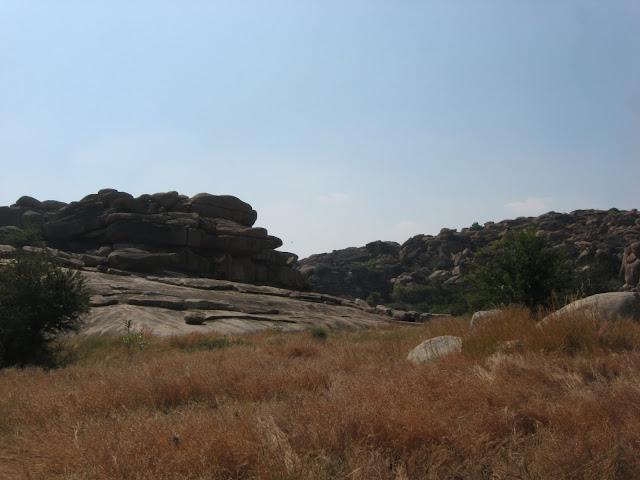 As the wind disturbed the dried grasses, some of which grew as high as my knees, I wondered what life would have been like for those we call ‘prehistoric man’. Would they have been safe from the predators here? If cows could manage to find their way up through the narrow passage today, wouldn’t tigers have been able to come up here then? How did they find this clearing in the first place? And how did they lead their lives? It was impossible not to imagine our ancestors moving around among these rocks, which were probably as old as time itself! 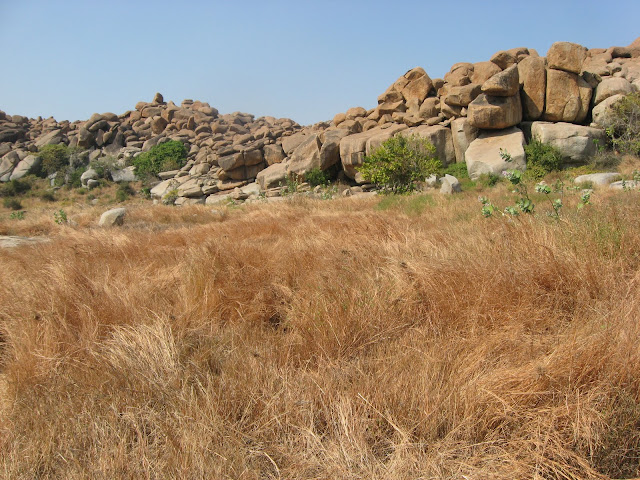 Once Samhith was clean enough, we moved to see the paintings. We weren’t the only ones, but we were the only Indians around. There were a group of people from France, with a French-speaking guide who kept talking about the paintings. Unfortunately, he spoke too fast for me to follow, and our driver knew little about them. He said few Indians wanted to come here, so he rarely brought anyone, unless of course, they asked! I contented myself with taking as many pics as I could. The paintings were spread over the entire clearing, with three sets quite clear…

One had this drawing of a snake….. 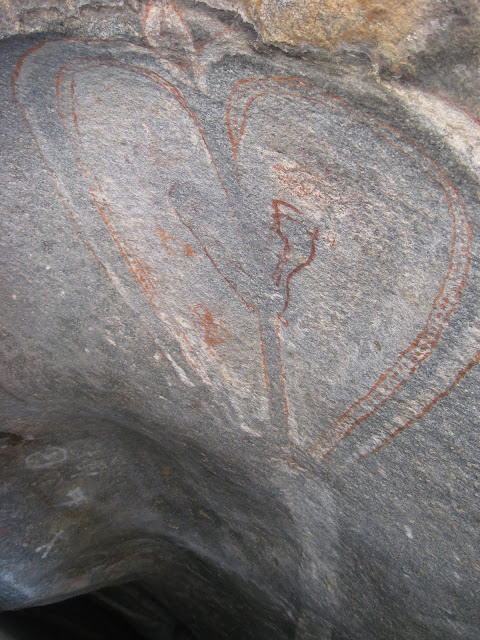 While others had bulls, deer and other animals, including people…. 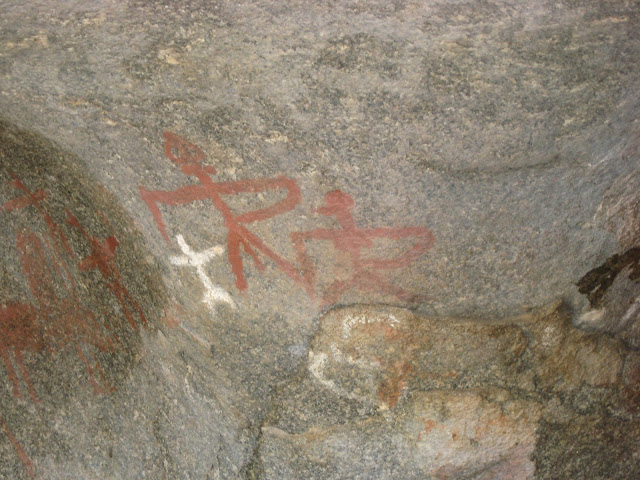 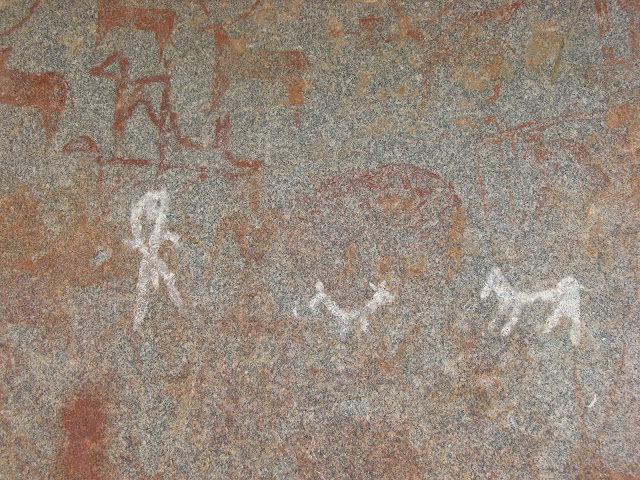 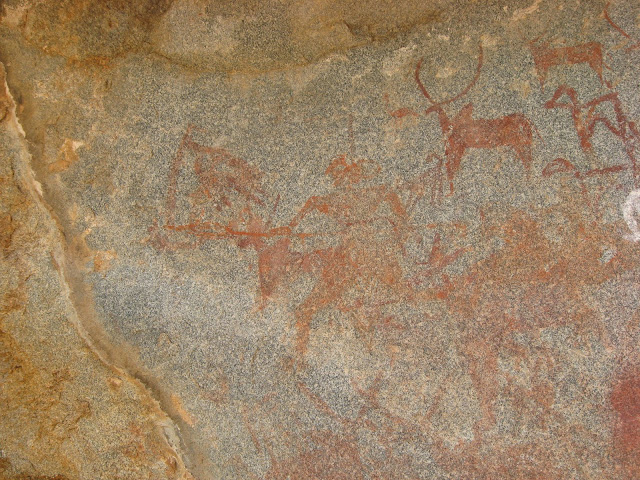 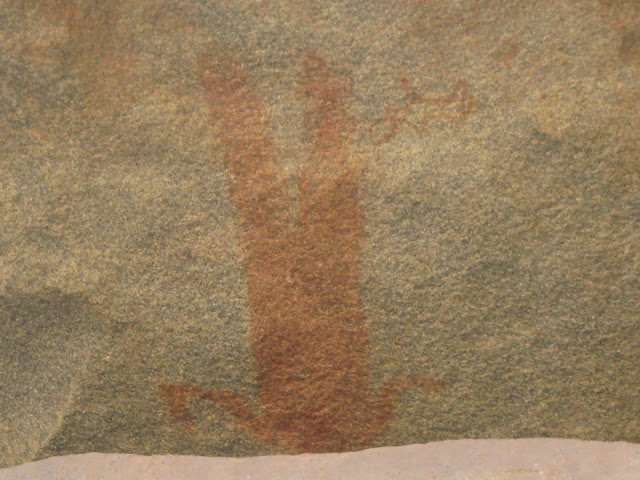 The circular mark seen here is apparently a burial symbol….. 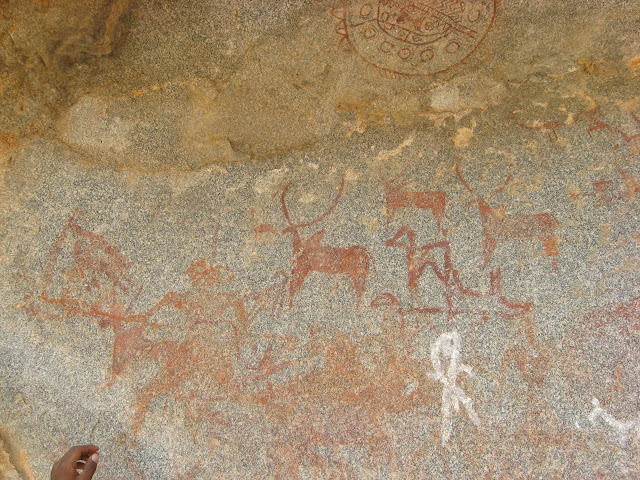 Here are some more pics…. 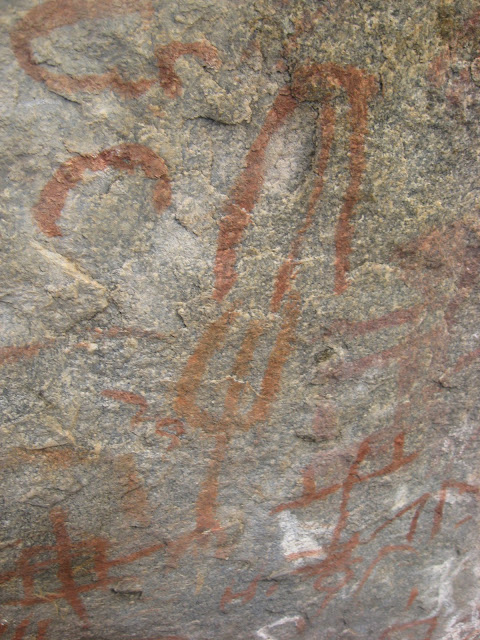 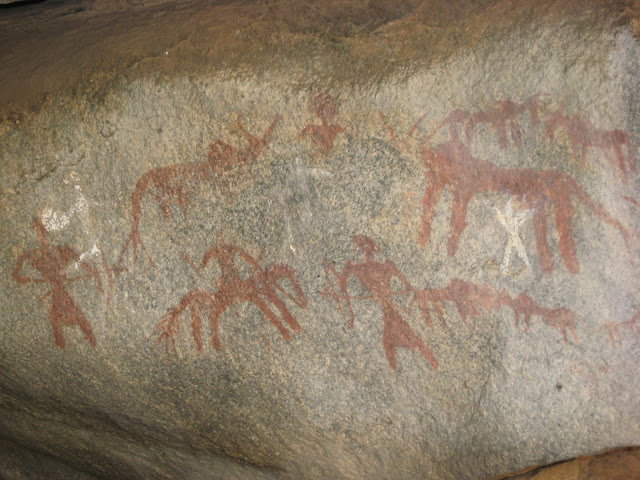 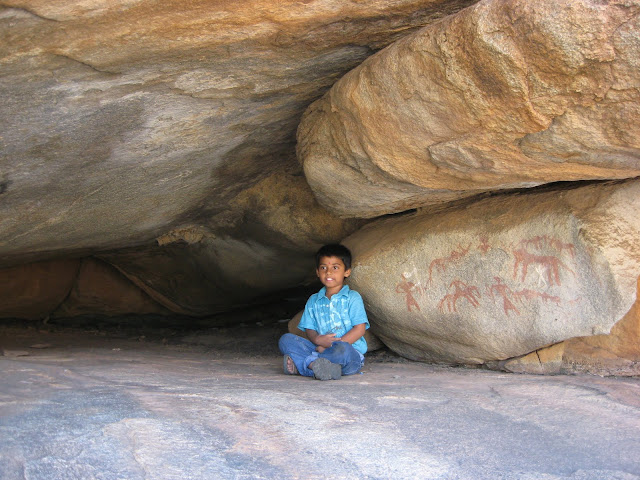 As we were leaving, our driver called us to another section of the rock, where there were some marks about 3 feet in length. According to him, these were footprints – either of the prehistoric men (since this is obviously a prehistoric site), or, more probably, the footprints of the Gods (since they obviously would have lived here in prehistoric times). Samhith was all excited, wondering how tall the men would have been, if they had feet this huge! It was rather a pity to tell him that our driver probably had no idea what these were, and that they were nothing more than erosion marks, but then, who wants to hear such lame explanations? He remains convinced that our ancestors were about 10ft tall (at least!), and that they left their footprints at ONLY this place! 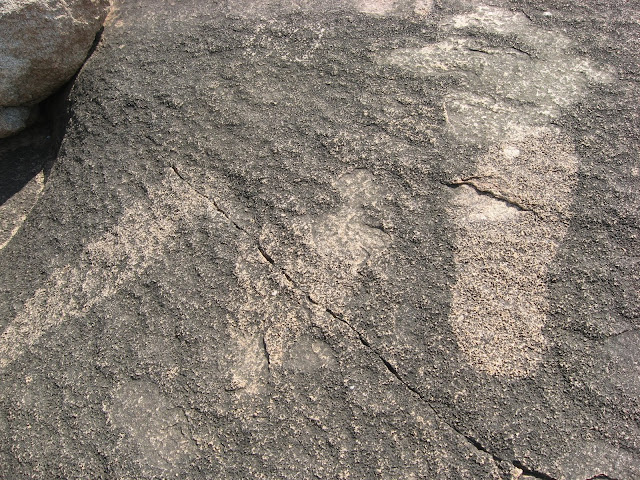 I am not an expert on these paintings… indeed, I know very little about them. For me, at least as of now, it’s more of an experience….a desire to visit these places where man first walked on earth. It makes me appreciate the small things in life, for we are so lucky, so privileged to have them. Imagine living like our ancestors, having to struggle for every meal, every piece of covering, even for a roof over the head, not to mention the dangers lurking around every corner! And yet they persevered, though it took centuries for things to change, for them to evolve! We complain about the state of things today, but how many of us are willing to work to make our dreams into reality. These places inspire me to work harder, for I know that change is inevitable, and just like the time changed for them, so will the time change for me!