Anegundi Part 6 - On the Tungabhadra


The Tungabhadra flows between Hampi and Anegundi, and makes her presence felt all over the place. That the land is so fertile even months after the rains is evidently due to her, and the fact that even in January there is enough water is a sight which makes us smile. 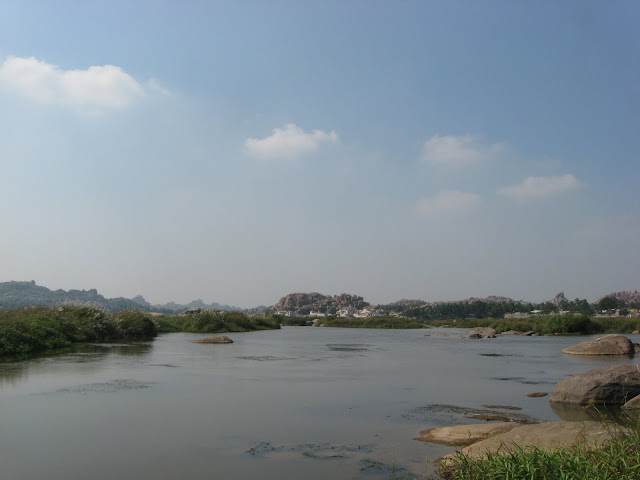 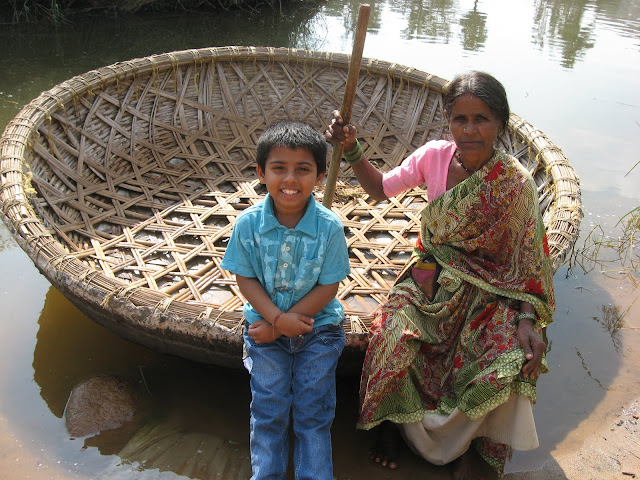 Our coracle driver was Ramzan Amma, a Muslim woman who earned her living by ferrying people to and fro, mainly to Navabrindavanam!

A dove peered at us as we went past! 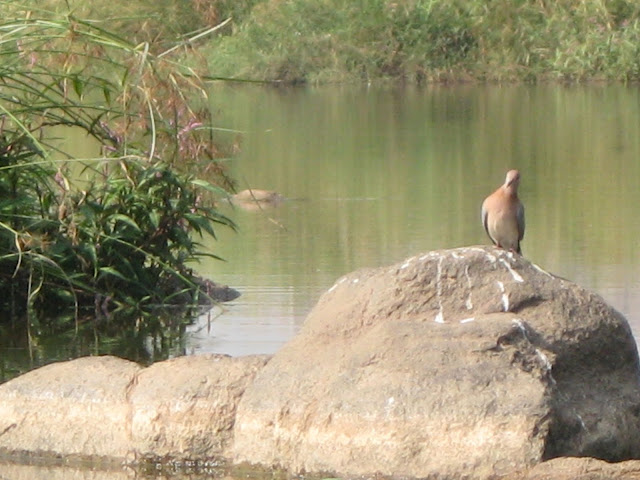 And while the river bank on the Hampi side had been covered by sand, 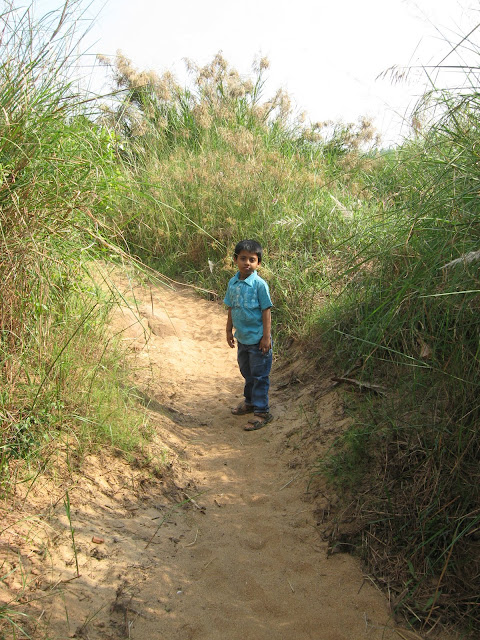 we found a rocky bed on the other side…. Covered with potholes! I had never seen potholes on riverbanks before Nighoj, and was really surprised to see more here! 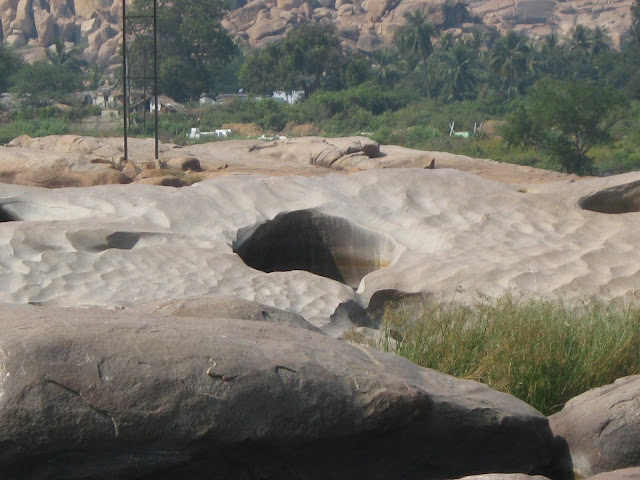 And then we took a motorboat to get to the main portion of Anegundi to visit the other places….. 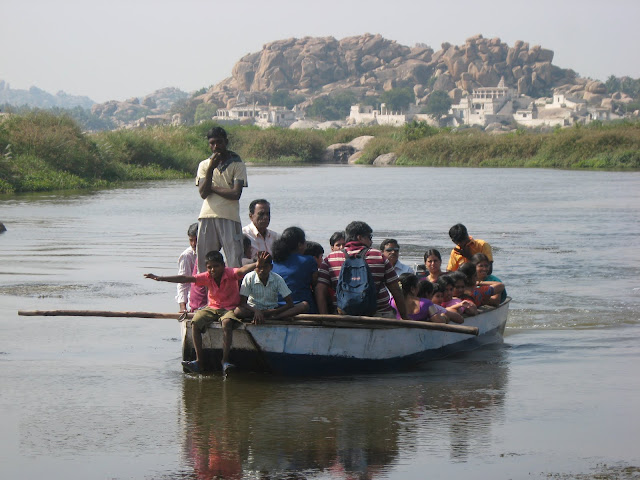 We expected to see many birds at the Daroji Bear wildlife Sanctuary, but, in fact, we saw more while walking around Anegundi, and every time we saw a bird, I realized that we were on the banks of the Tungabhadra. It started with this purple heron we saw on the river…..It stood on the rock in the middle of the river, oblivious of the crowded motorboat chugging its way down the river…. 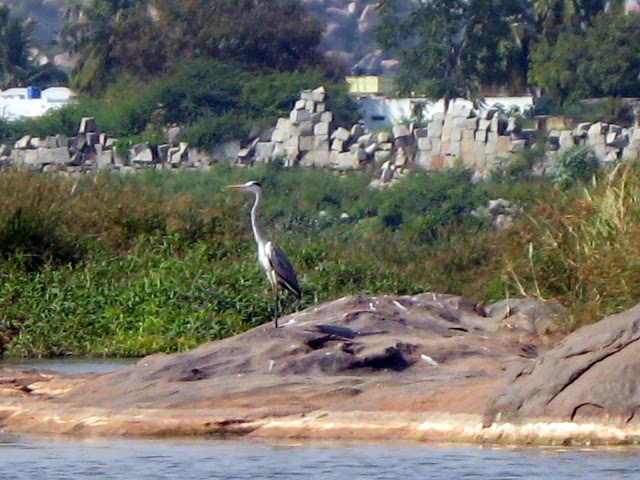 I was able to take a couple of photos before the rest of my co-passengers became aware of the bird and started pointing the bird out and making a ruckus. The bird was probably disgusted, and flew away…

But we saw it again, 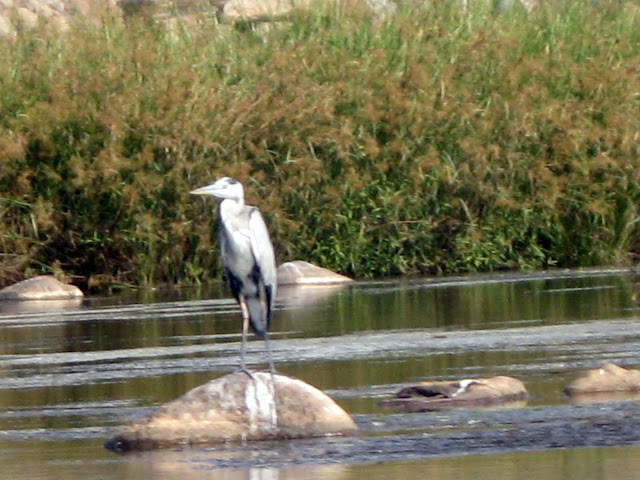 and this time, it was joined by a Little Cormorant… 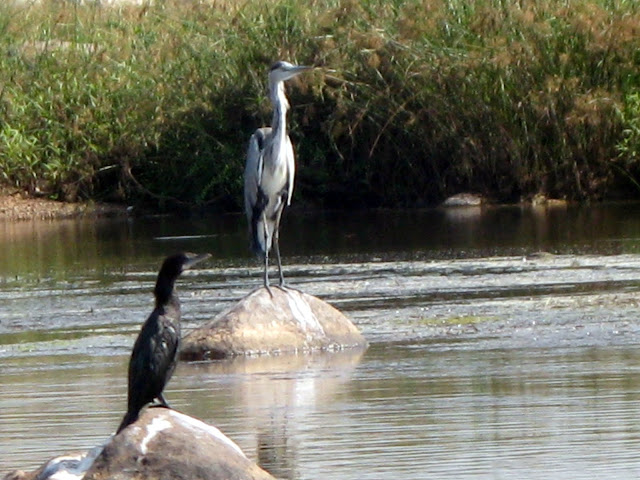 Later, when we gingerly walked across a makeshift bridge made of ancient pillars laid out across a stream diverging from the river, we spotted this Pied Kingfisher…. Unfortunately this is all my poor camera could do…. 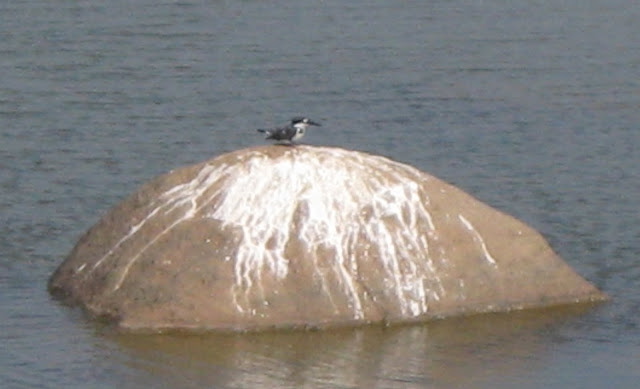 A dove posed for us…. 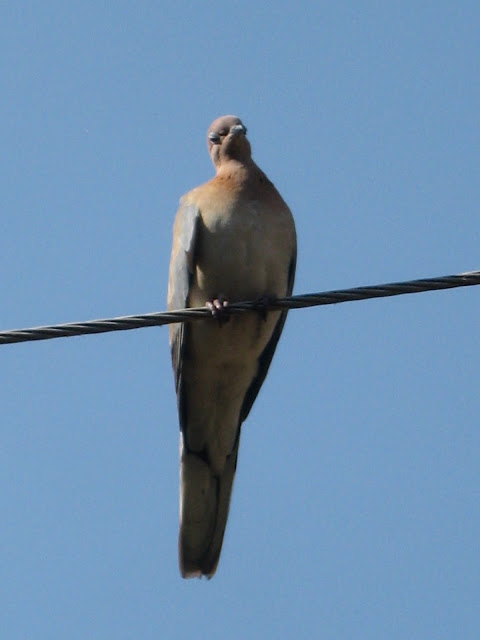 As, for the first time, did a Little Green Bee Eater! 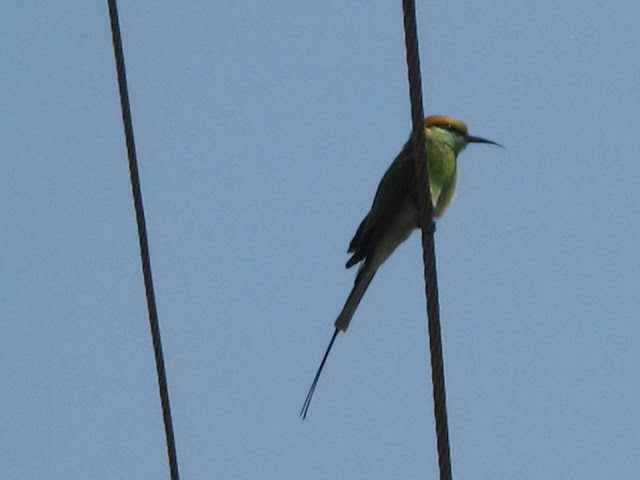 We did see more birds, but unfortunately, not close enough to click!

We took a coracle to get back to Hampi,and this time, Samhith got to help while the coracle was being emptied of the water which had collected! 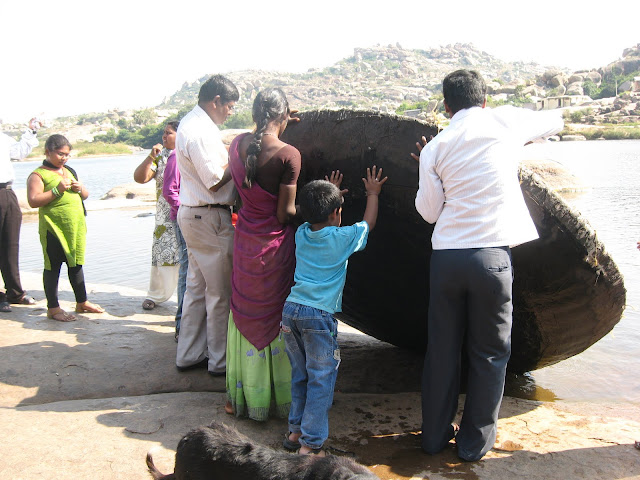 Interestingly, all the coracle drivers on the Anegundi side were women, and those on the Hampi side were men! Each brought one load of people to the other side and went back empty, even if there were many people waiting for a ride! When we asked why, we were told that there were two groups of people running the coracles, and this was the arrangement they had agreed on, so that they could both survive! 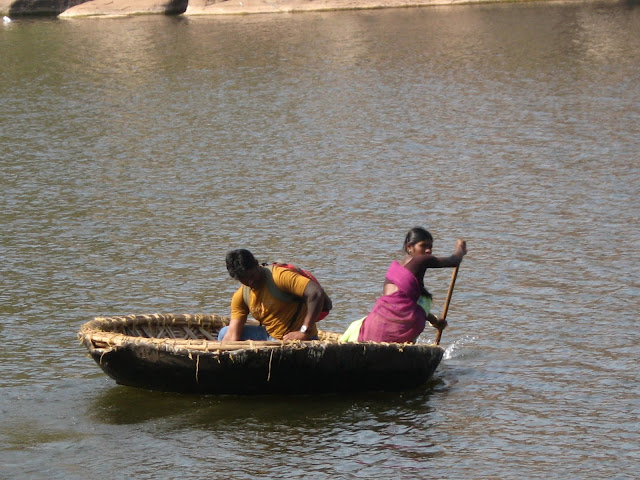 I was interested to see that most of these coracle drivers were women (see the second pic in the post), and they were as capable of handling the boats filled to capacity, as the men. In fact, they were much more efficient, better at calculations, and got into lesser arguments with the passengers than the men! Oh yes, and they were a lot more united too! When one of the women refused to take us to a particular dropping point, all the other women ganged up and refused to ferry us there! The lone male driver at the moment dithered, but he finally gave up! We had no choice but to go the way the majority wanted to! 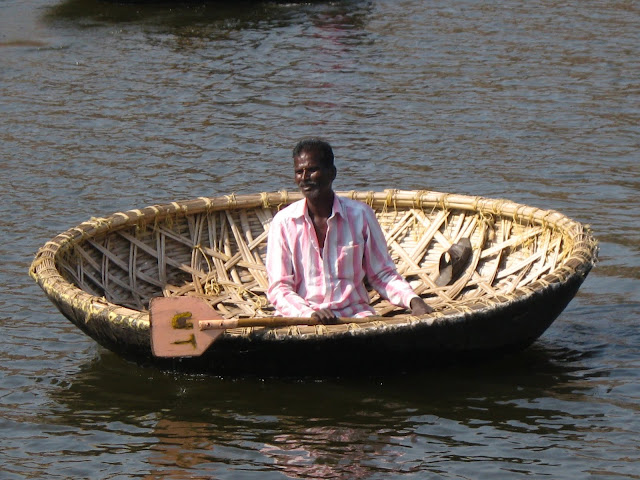 The concept of women drivers seems to work well, since it gives them something to do while the men are at work, and it also adds to the income. The fact that it is a viable prospect is evident from the new project the ASI is trying out at the Vitthala Temple. Electric cars ferry passengers from the parking area to the temple and back, and all these vehicles are driven by women!

It was at least a positive note to look back on, as we readied to take our leave of Hampi and Anegundi!