July 16, 2011
It’s been a while since I wrote about my Hampi trip, so those of you who have forgotten about the series, please read….

We had just half a day for Anegundi, and once we had visited the Navabrindavanam, we were eager to see as much of the ancient city as we could. We asked our rickshaw driver to ignore all the usual temples and also the places which would involve any strenuous climbing, and to take us to some interesting and different places that we could cover in the time we had with us. For a minute, the driver seemed to be at a loss. In a small town where you see only boulders no matter where you turn, it surely must have been difficult for him to think of a place he could take us to! At last, he agreed to show us some places which would involve a minimum of climbing, and would also be worth the effort. The first among these was the Durga Temple. 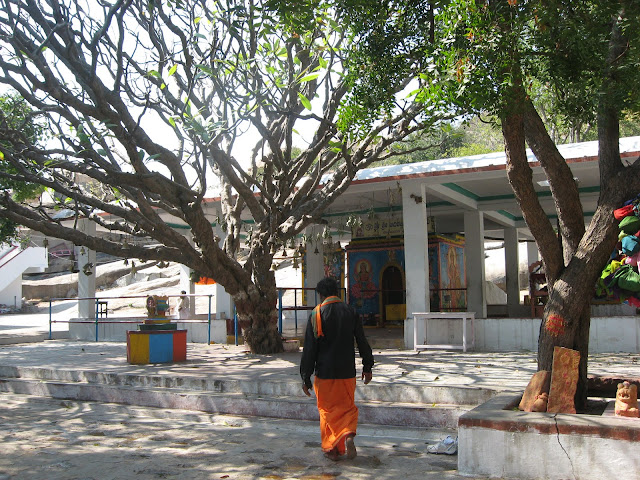 Located on a small hillock, and almost out of sight from the road, the temple is dedicated to the Goddess Durga. However, since this temple is situated at the base of a fort, it is also believed to derive its name from the local word for fort, which is ‘Durg’. At one time, it seems to have been a deity installed by the kings for the protection of the fort. The temple is a small one, and from what we heard, was largely ignored by the local populace after the decline of the Vijayanagar Empire. We heard the story of how a wandering hermit took up the temple as his abode, re-started the prayers, and even convinced the people to contribute to its upkeep. Along with the increase in funds came greed, and one of the local merchants attempted to steal the temple’s money. Almost at once, he was killed in a gruesome manner, which reinforced the locals’ belief in the deity, and today, the temple is quite a popular one, and actually quite well maintained. There was a priest who not only happily performed the puja, but didn’t even ask for any money! He aided our driver in telling us the story, and when a Bengali couple who followed us wanted some explanations, he called me back so that I could tell them the story in English or Hindi! 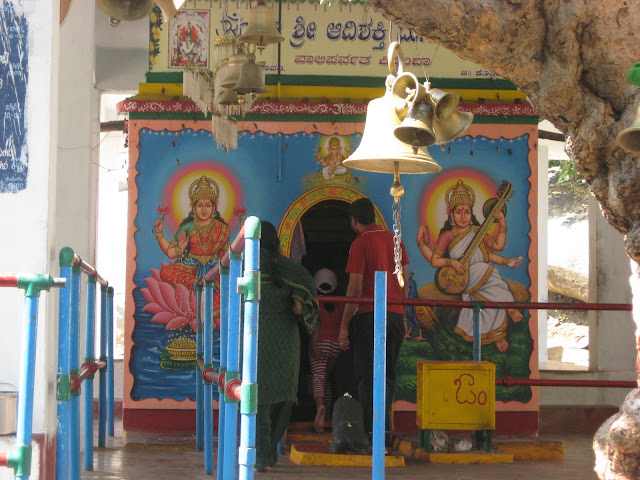 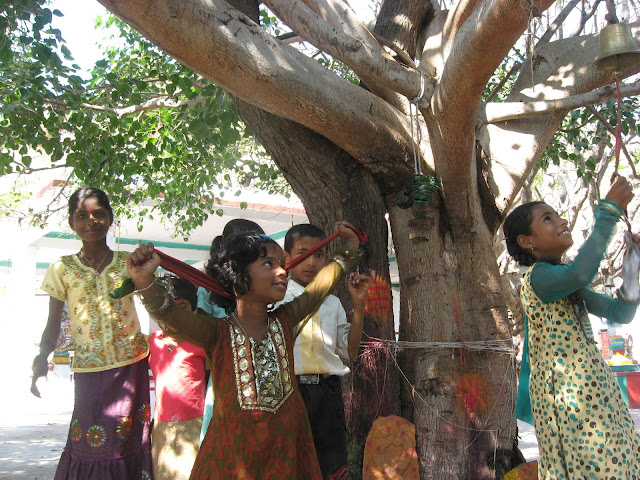 The steps at one time would have been well paved with stones ones, but now they just resembled steps, since no one had bothered with any repairs. I would hardly have ventured there alone – I didn’t really have any choice, since Samhith and Shankar had already moved on! As I picked my way carefully over the rocks, I wondered what we would find at the top! 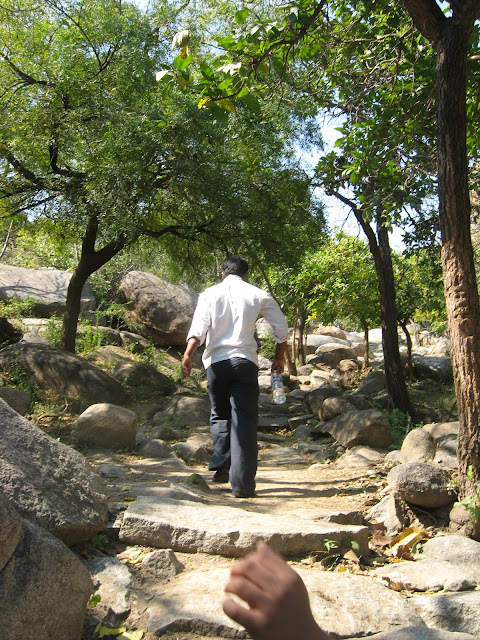 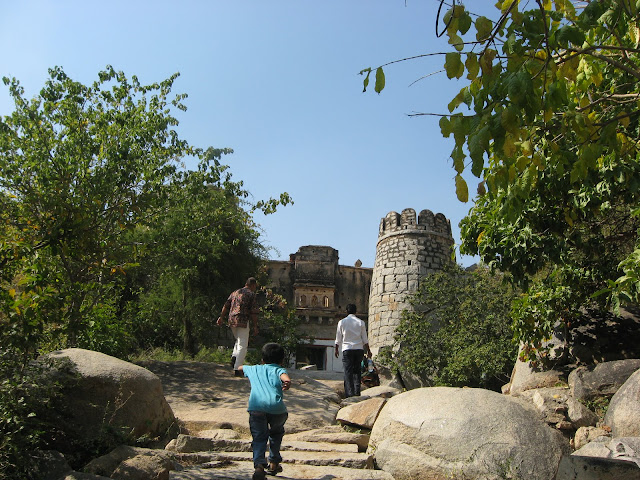 We were greeted by a huge doorway which once welcomed the kings, but which today is simply a crumbling old structure which few people come to see. 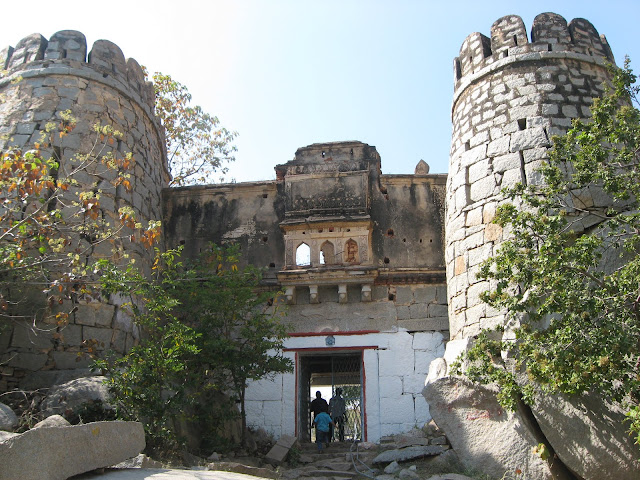 There was once a pond inside the fort, but today the walls have caved in, and there is nothing much to see. The only things we can see standing inside the fort are the tombs….. 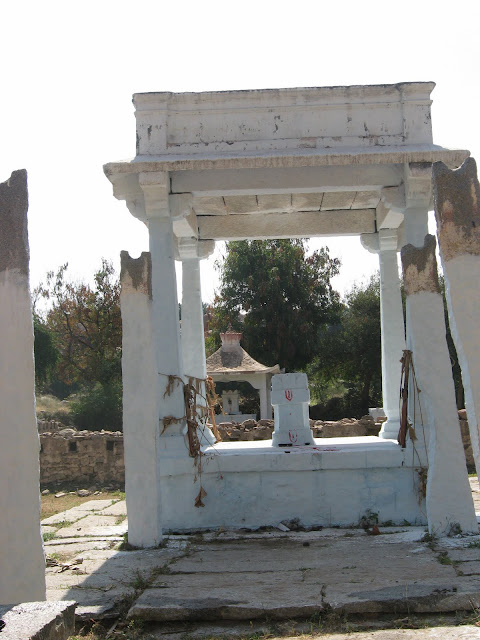 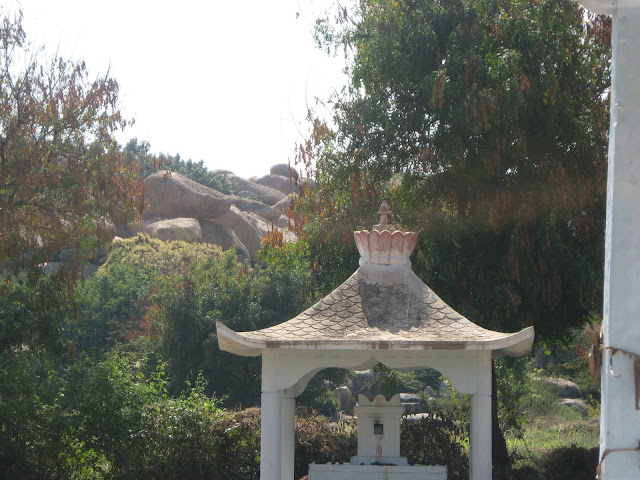 There really wasn’t much to see or do in the fort, and we headed back down after a short rest. The most interesting thing about the place today is the way it has grown wild over the centuries…. I wonder how it would have looked in its heyday!