Happy Sankranti / Pongal to one and all!!! 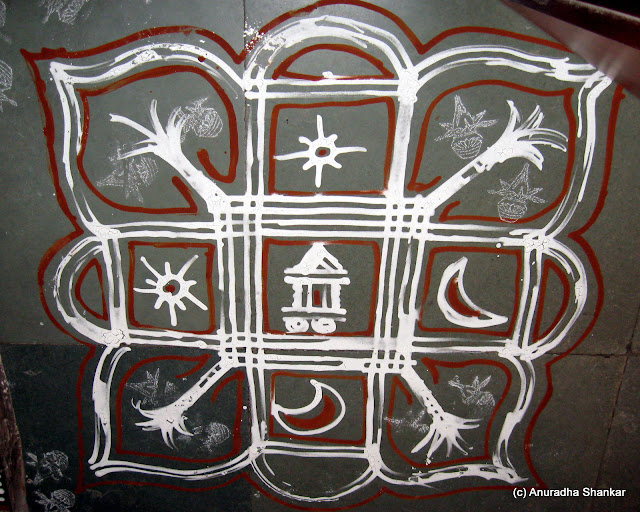 Pongal or Makar Sankranti is a harvest festival celebrated all over India. This day marks the beginning of the northward journey of the sun  from its southernmost limit, and is referred to as 'Uttarayan'. The period during which the Sun journeys to the north is an auspicious one, and hence this festival is an especially important one.

The festival is known as Pongal in southern India, especially in Tamilnadu, and the word itself refers to a sweet delicacy with milk, rice and jaggery prepared on this day. This year, we can not celebrate the festival due to a bereavement in the family, but we will still prepare and enjoy the pongal later today!

The kolam in the photo above is from last year... and it shows the key concepts associated from the festival.... the chariot at the centre represents the chariot of the sun, beginning its journey to the north. The sun and the moon on either side represent the same. The sugarcane on the corners represents the harvest, and while you can not see it in this image, above it is a pot representing the vessel in which the pongal is made. This pot is the essence of the Pongal festival. The pot is decorated with patterns representing the sun and the moon, and to make it auspicious, a fresh turmeric plant, with the turmeric roots intact, is tied around it. Milk is first boiled in this, and then the rest of the ingredients are added to make the 'chakkarai pongal' (sweet pongal).

In the northern parts of the country, the festival is known as Makar Sankranti, symbolizing the transition of the sun into the Makar Rashi (zodiac sign of Capricorn). In Maharashtra, the festival is characterized by the exchanging of sweets made of sesame seeds coated with jaggery. Sesame seeds are called 'til' and jaggery is 'gud'. It is said, 'Til gud ghya, god god bola' which essentially means "Eat Til-gul' and speak sweetly."

The festival is celebrated differently in different parts of the country - In Andhra, this is the time for Bommala Koluvu (similar to the Bommai Kolu - a display of dolls, which is placed in Tamilnadu and Karnataka during Navaratri); In Gujarat, this is time for the Kite festival ; In Kerala, this is the day the Makara Jyothi appears at Sabarimala.... Every state celebrates the festival in its own manner. (For more information on the different modes of celebration, please go to the Wikipedia Page.)

As someone who hails from Tamilnadu and has grown up in Maharashtra, my memories of the festival happen to be getting up early in the morning to see my mom making Pongal, and then rushing out with my friends to exchange Til-gul!! January, unfortunately, has always been a time for exams and school.. first for me, and now for my son... Going out to really enjoy the festival has never really been on the charts. It would be wonderful to go to Chennai someday, and enjoy the full flavour of Pongal..... or head out to Gujarat, and enjoy watching people fly kites..... but these are pipe dreams, after all!! Meanwhile, Happy Pongal or Sankranti to everyone!!!