Faces in the Crowd - Children

January 13, 2013
We were at Shegaon, offering our prayers at the samadhi of Shri Gajanan Maharaj, visiting the places related to his life....It is said that the saint first appeared near a Banyan tree, as a young man. It was under the very same banyan tree that I came across these children. 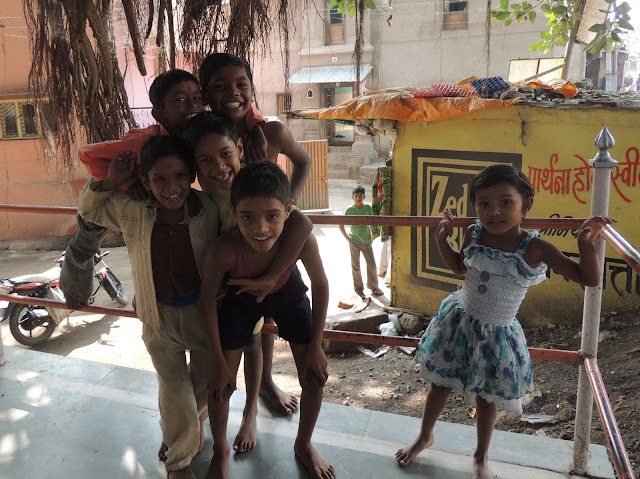 They were playing around, and when I brought out my camera, eagerly crowded around me, shouting, 'Photu! Photu!" They were making such a lot of noise that I told them that I would click them, if they quietened down, and they did, even if for just a while. And then, while they were up to their antics, posing for the camera, this little girl came up and began looking at us curiously. The boys tried to scare her away, and she hid at once, obviously used to being sidelined by the boys. When I stopped clicking and asked the girl to come forward, they seemed to get the message and calmed down a bit, and the girl finally gathered enough courage to stand at arm's length from the boys.

When I showed them the photos I had clicked, they asked me if the photo could come out of the camera. When I replied in the negative, they had even more questions - was such a camera very expensive? Just how much did one cost? Why didn't I have a camera which could bring the photo out at once? By then, Samhith was getting restive, and we had to leave. So, I told them that if they wanted a copy of their photo, they could give me their address and I would send them one, but they weren't that interested. But by the time the conversation was over, the girl had disappeared.

This photo was clicked in a small town in interior Maharashtra, but it could well have been clicked in any part of India - the story would have been almost the same. The boisterous boys, the shy and quiet girls. After all, that is what they are taught and trained to be... girls should be neither be seen nor be heard... and as to boys, well, as they say, if a boy isn't naughty and boisterous, who else will be? It is this thought which is responsible for most of the problems we face in society these days. Wonder when, if ever, that will change!