January 10, 2013
The rain lashed at us, and the puny umbrella I was carrying was practically of no use. Once again I cursed myself for not carrying a raincoat, knowing well that I hated raincoats, and much preferred getting wet. It wasn’t getting wet that I really minded, but holding on to the umbrella and trying to walk. There were shops on either side, but most were closed. The few that were open offered us scanty protection from the rain, but at least I could concentrate on not slipping on the steps by walking under their awnings. We were walking towards a temple which is believed to be the origin of one of India’s great rivers, and, seeing the water flow beneath our feet, it was eminently believable! 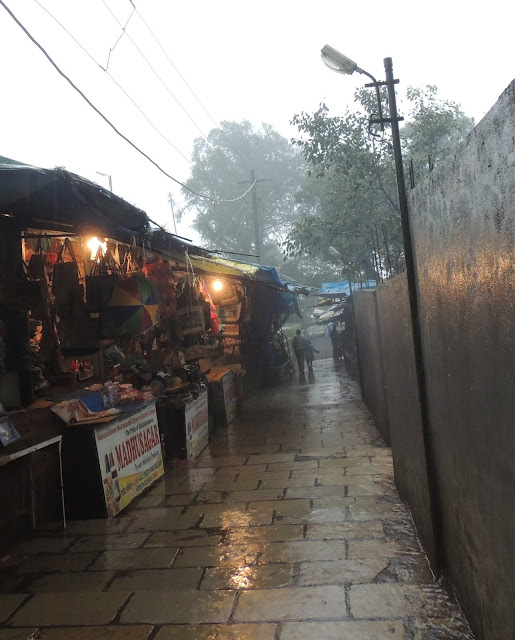 This was about four months back, at the height of the monsoon, we were visiting Mahabaleshwar. It rained constantly, as was to be expected, and the fog was so dense that we could scarcely see anything beyond a few yards. We had a beautiful room with a balcony where we could sit and enjoy the rain. We could have chosen to sit inside and simply enjoy the weather, but we chose to explore, beginning with the temples at Old Mahabaleshwar. That is where we were, gingery feeling our way across the flooded path which led to the Panchaganga Temple. 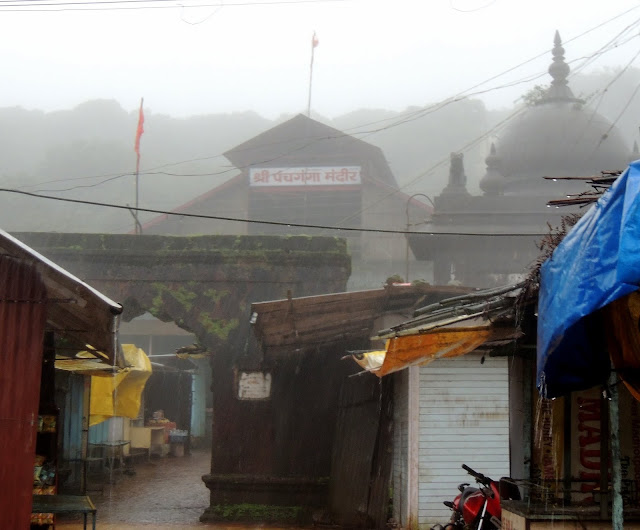 Panchaganga – the word means ‘Five Gangas’ or five rivers as sacred as the Ganges, and this temple is believed to be the origin of not one or two, but five rivers – the Krishna, the Gayatri, the Savitri, the Venna and the Koyna. The temple here is an ancient one, built by the kings of Devgiri (present day Daulatabad) and later renovated during Shivaji’s reign. Here are five spouts over which are carved cows’ heads in stone, from which emerge the five sacred rivers. The rivers flow out in different directions, but eventually, all of them merge with the Krishna, who flows across Maharashtra, Karnataka and Andhra Pradesh before merging with the sea. She is the third longest river in India, and has scores of temples along her banks, of which this is the first. 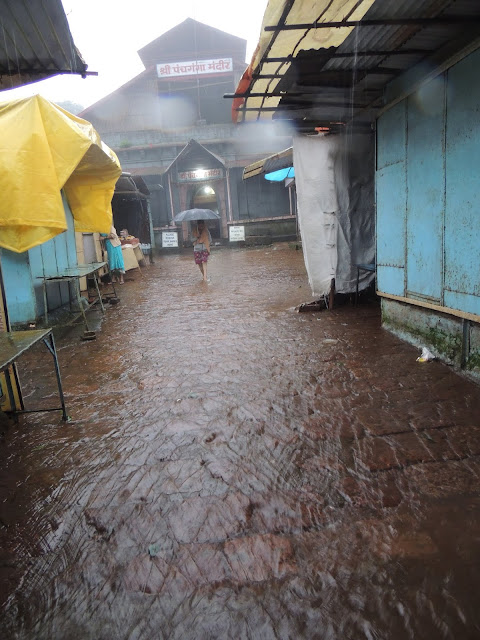 At normal times (any time it doesn’t rain), the temple is a simple one, though filled with people, some bathing, some praying. In the rain, the temple took on a completely different look – water gushed out of the cows’ mouths, the tank was overflowing, and was empty but for a couple of enthusiastic boys enjoying themselves in the water. Fittingly, for a temple dedicated to water, there was water everywhere! I don’t think I have enjoyed a visit to a temple more!

There is also temple here, on the way back... dedicated to Lord Shiva as Mahabaleshwar – the strong one. It is he who gives his name to the town, though he is largely forgotten these days by visitors who enjoy the lake and the strawberries more. 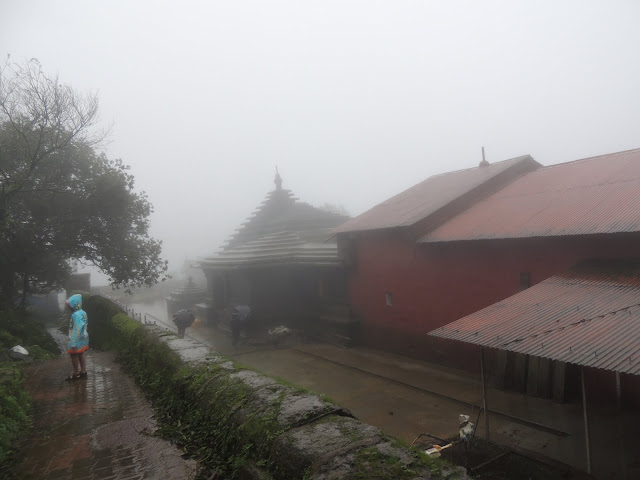 Walking a little higher to get a decent photograph, I could barely stand straight. The wind was so strong, and the rain so heavy, I decided to give up exploring for another time. 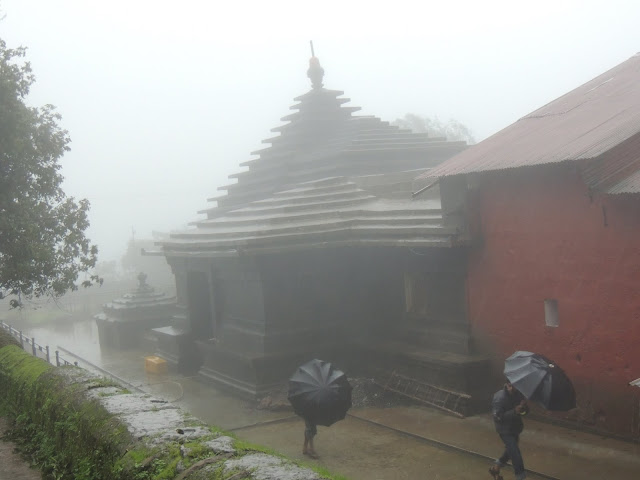 This is one of the places I have been to, a number of times, yet, every single time, I see a different sight. The first time I visited the temples, there was a festival in progress. We just had a quick darshan before escaping from the crowd! That was long before I started my blog, else I would have captured those colourful scenes then, which would have contrasted so beautifully with the monotones of these photos! The second time I visited, the temple was practically empty, but it was a bright, lush, green, all around! How I wish I had a camera then! And yet, I would love to visit the temples again..... see what else they can show me!