January 15, 2013
He was among the last of the powerful Mughal Emperors. He might not have been among the most popular, but for 49 years, he ruled over the bulk of the Indian Subcontinent. We remember him more today for the temples he razed and the mosques he built over them. And yet, we cannot but help lift an eyebrow in surprise and admiration when we learn that he refused to use the royal treasury at his disposal, choosing instead to knit caps and copy the Quran anonymously and use the proceeds from the sales for his personal expenses. Aurangzeb stands out from among the Mughal emperors in many ways – his fanatical zeal for Islam, his intolerance for all other religions, and above all, the simplicity of his lifestyle, which is reflected in his last resting place.

Aurangzeb spent most of his life conquering and securing the Deccan for the Mughal Empire. However, the victory was an expensive one, and left the army crushed in more ways than one. As he lay dying near Ahmednagar, he is believed to have said to his son, “I came alone and go as a stranger. I do not know who I am, nor what I have been doing.” 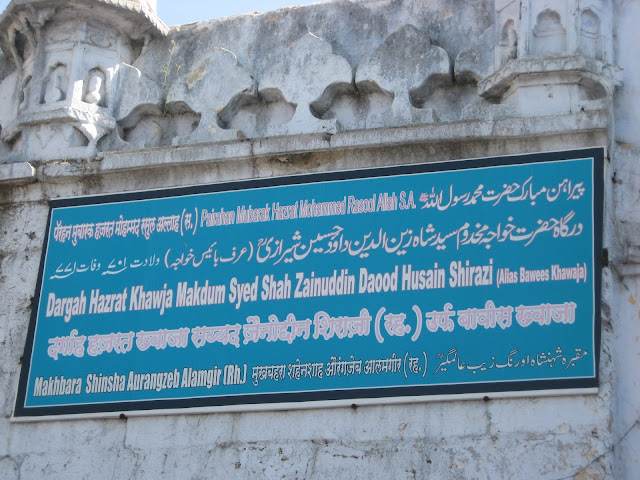 Aurangzeb is buried at Khuldabad, near the shrine of the Sufi saints, Sheikh Burhan-u’d-din Gharib and Syyed Zain-u’d-din Shirazi. 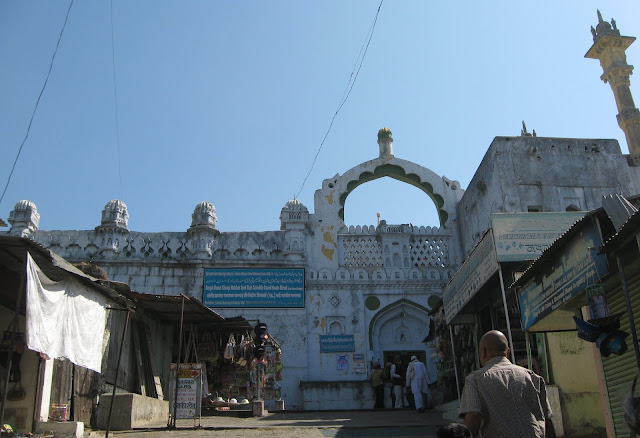 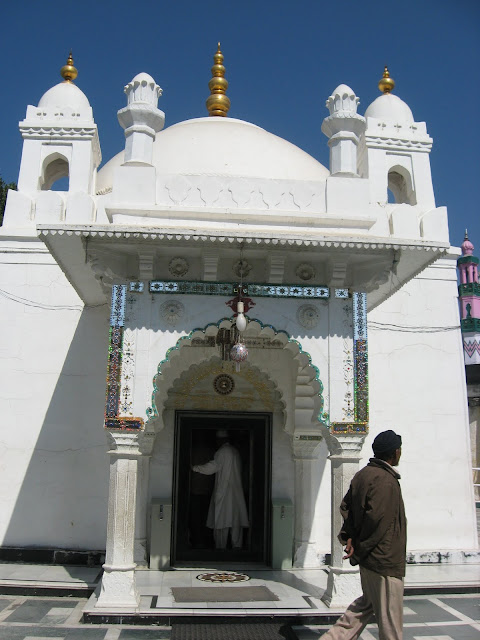 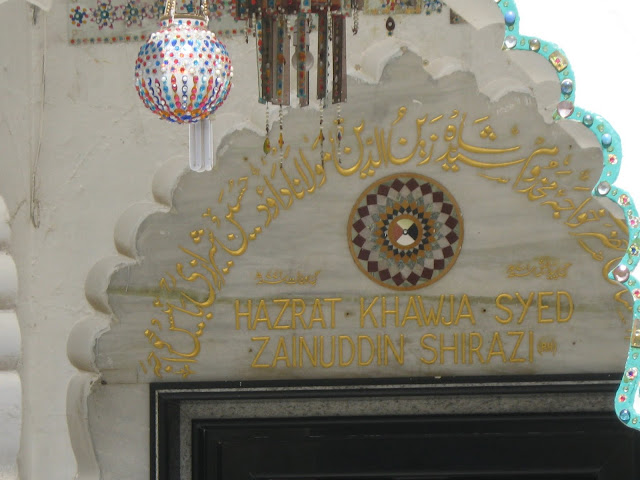 That he should choose his resting place near two saints seems to be apt, considering his fanatical beliefs, but the tomb is much simpler than one would expect for a Mughal Emperor. In fact, it is said that Aurangzeb had asked for a simple, open air grave, unlike the magnificent tombs of his forbearers, and so it remained, from his death in 1707, till Lord Curzon, shocked by the simplicity of the tomb, ordered a marble structure erected around the grave in 1911. 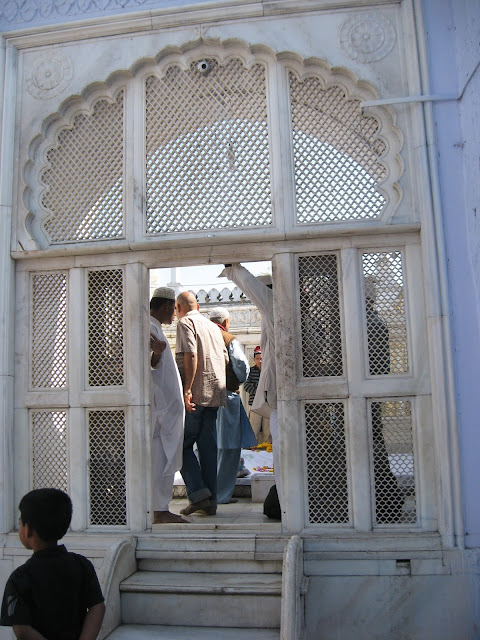 Also in the same complex are the tombs of Aurangzeb’s second son, Azam Shah, and his wife. 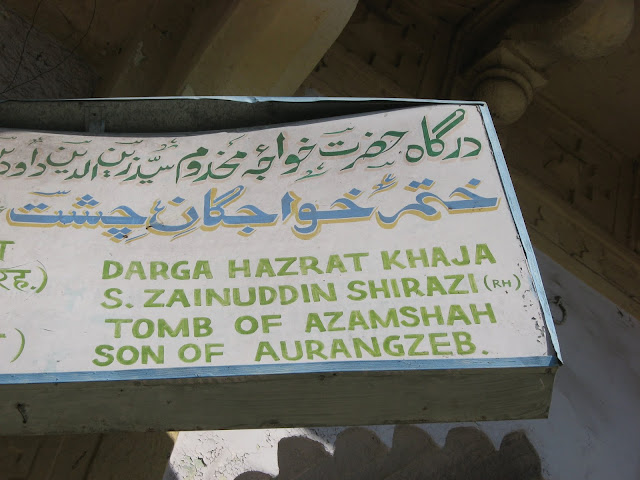 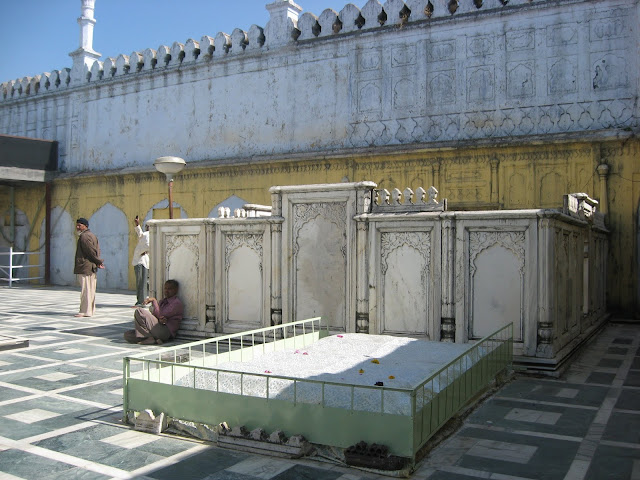 There are few who visit these tombs, except during special days commemorating the saints. The time we visited turned out to be a time for prayer, and there were a bunch of people paying their respects at the tombs, which is why I have not clicked photos of the tombs themselves. However, what caught my eye was this young man who stood by the side, reciting some verses, probably from the Quran. He stood in his corner, unconcerned by the throng of people, his rhythmic chanting adding a background score to the scene, making people quieten down. It was only a little while later that we realised that the boy was blind! 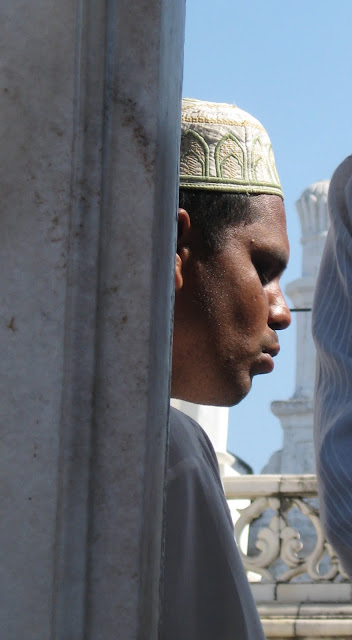 As we walked through the entire complex, the silence was so audible, that his voice echoed through the halls, making the experience an unforgettable one. And that is what I have brought back from my visit to Khuldabad – the memory of a young, blind boy’s chanting the verses from a holy book...over the grave of a king who ruled one of the biggest empires of the world!

Location: Khuldabad is about 10 Kms from Ellora Caves and about 34 Kms from Aurangabad

Where to Stay: There are a few hotels at Khuldabad, but it is a better option to stay at Aurangabad, which has plenty of  hotels to suit all budgets.

Suggestions: A visit to Khuldabad can be combined with a trip to the Ellora Caves and Daulatabad Fort.