We drive through winding roads, with nothing but thick forests all around us. Our destination is nowhere in sight. A stream meanders along, and here and there are bridges. The road and the bridges are the only signs of human activity. 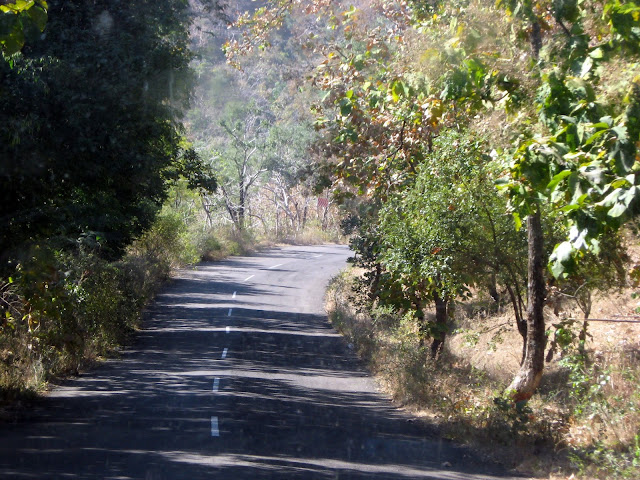 This is not what I had imagined the place to be, and I am pleasantly surprised. Suddenly, we enter a clearing, and the bus stops. This is our destination, and this place is more like what I had imagined – the flurry of tourists eager to see the sights, guides offering their services, shops selling knick-knacks... but there is still no sign of what we have come to see. Many of our co-passengers seem to be in hurry. Most have already set off, some led by guides, some by themselves. We are still wondering if we really need a guide. Two middle aged women approach us. “The guides here seem to be expensive. Would you like to share the cost of one with us?” That suits us perfectly, and we agree, and set off at last. As the guide tells us about the history of the place, I listen with but half an ear. I already know much of what he is telling us. My eyes are peeled on the mountains surrounding us. Ahead is a path that takes us further into the mountains, but little can be seen of what lies ahead. I huff and puff as I clamber up the high steps (my height and weight are certainly a disadvantage here) and all I can do is concentrate on the bit of the path I can see. We turn a corner, and all I notice at first is that the climb is over. Ahead, the path is almost flat. I heave a sigh of relief and it is only then that I can see what I have come so far to see  - the Ajanta Caves. 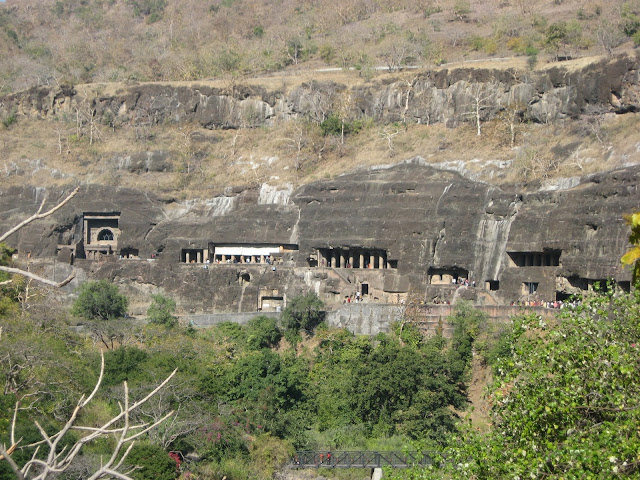 Too much has already been written about the caves. These are among the UNESCO World Heritage Sites, and figure on the list of almost every traveller to India. Most people I know have visited the caves multiple times, and are surprised that I hadn’t visited them for so long, in spite of growing up in Mumbai. On the net, there is an over-deluge of information (if I can use such a phrase). There are just too many websites and blogs giving detailed reports of every cave. What then, can I add to them? Nothing, but my own thoughts.... and here they are. ... 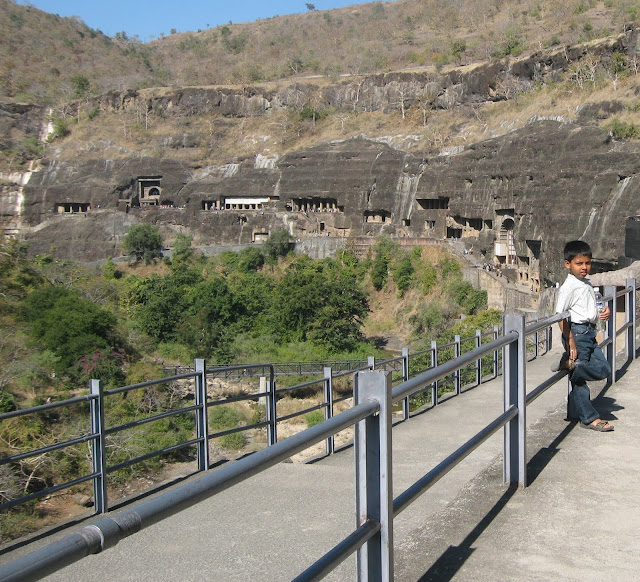 The caves at Ajanta are excavated in a horse-shoe shaped rock surface about 76 m in height, overlooking a narrow stream known as the Waghora. This aerial view from the ASI website gives an idea of how the place looks today.

Imagine then, the same place, over two millennia ago, in the second century BC, when the first caves were excavated, or even in the 9th century AD when the most recent caves here were dug out of the rock – how on earth did people ever arrive here? It is believed that these mountain ranges fall on the ancient Deccan trade route to the sea, and that these caves were a sort of retreat for the Buddhist monks during the monsoon – months when the heavy rain in these areas kept the monks safe in the caves, but secluded from the rest of the world. I can almost imagine them walking barefoot through the dense forests, unmindful of the dangers, seeking a place where they could find some semblance of peace.... those monks must have been great explorers... but more than that, they would also have been great artists, excavating, carving and painting the caves as beautifully as they did! 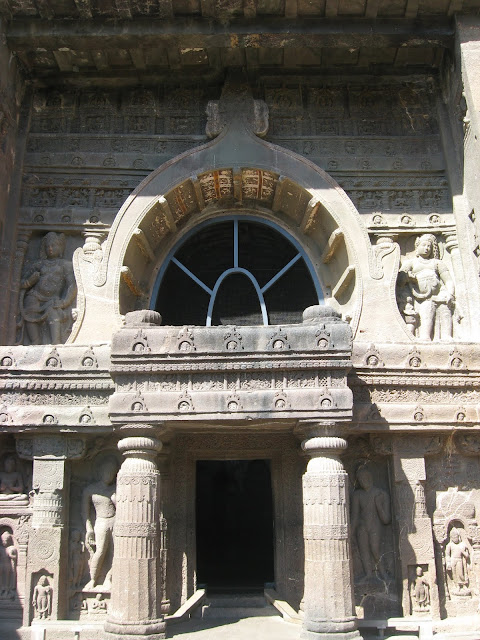 As with almost all elements of our heritage, the caves lay forgotten till an intrepid British officer arrived here on a hunt and discovered a cave opening. Showing us a glimpse of what future Indians would do to leave their mark in history, Captain Smith scratched his name and the date, April 1819 on the wall of the cave – today numbered Cave 10. Captain Smith might have hoped to mark the cave in order to identify it, or just leave us the sign of his presence there, but future visitors made sure his name would become almost illegible – by following the same train of thought. The cave wall is so covered with signatures that the original paintings are almost invisible, and so is Captain Smith’s signature! Today, a glass window covers this portion of the wall, and tourists can be found eagerly scanning the same, trying to identify all the different names etched on it...

There are 30 caves in all, a few of which are unfinished. Five of the caves are Chaitya-grihas (halls of worship) and the rest are Viharas (monasteries), indicating that these caves must have housed quite a number of monks at one time. 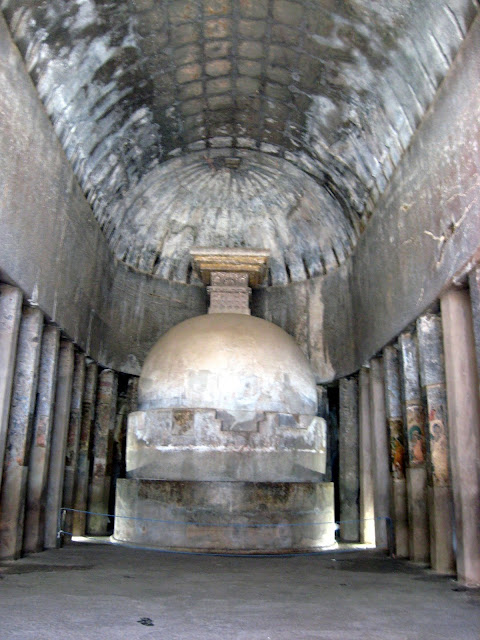 The caves were excavated over two periods – the first set around the 2nd century BC, during the reign of the Satavahanas. The monks who came here then belonged to the Hinayana form of Buddhism – the original, uncorrupted form of Buddhism, as preached by the Buddha. In these caves, we can see Stupas representing the Buddha, but not figures. The paintings represent stories, especially from the Jataka Tales. 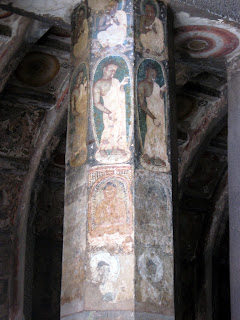 or the life of the Buddha 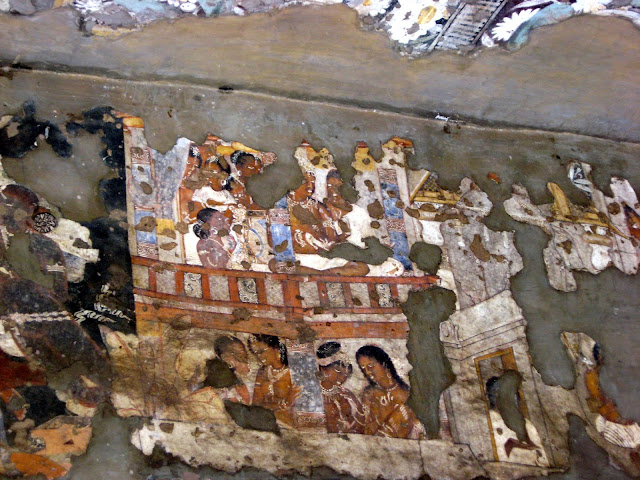 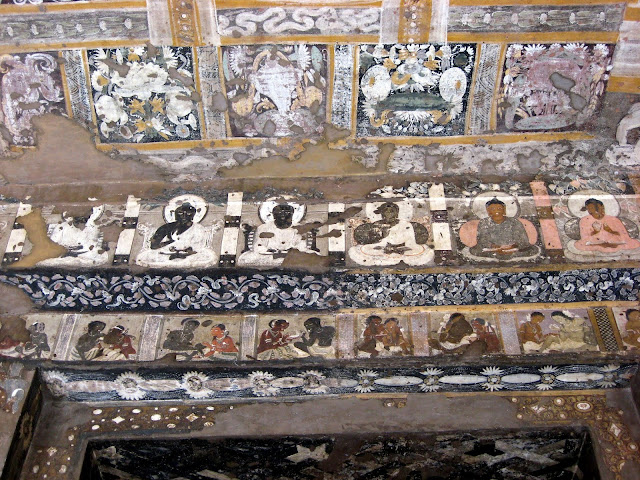 The second set of caves were excavated more than five centuries later, somewhere in the 4th to 5th centuries AD, during the reign of the Vakataka kings. These were contemporaries of the Imperial Guptas, and these caves seem to have been built under royal patronage, unlike the earlier ones. Another change in these caves is that the monks who lived here then followed the Mahayana form of Buddhism, by when the Buddha had begun being worshipped as a God. These caves have figures of the Buddha, as well as Stupas. 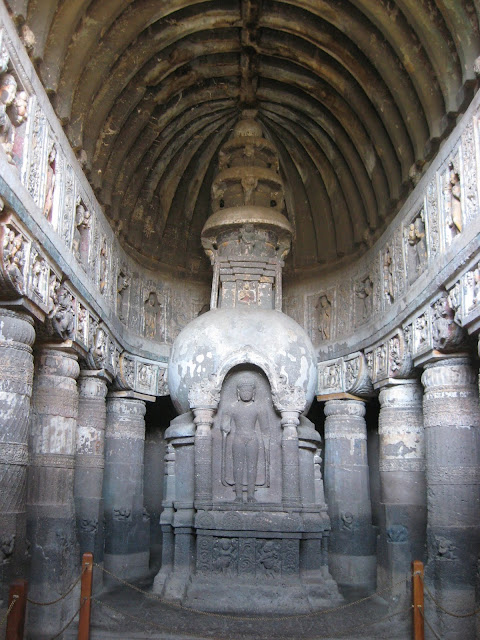