This is the second day of Navaratri. It is said that the first three days are dedicated to Parvati, the next three to Lakshmi, and the final three to Saraswati. Yesterday, I posted about the Kollur MookambikaTemple in Karnataka. For today’s post, I have chosen a temple I have visited often, but never written about. It is a temple I once got lost in, but love visiting again and again. The temple is so huge that I don’t think I can ever see all of it. Each time I visit, I get to see something I have missed on my earlier visits. It’s not just the architecture of this temple, which is brilliant, but the deity herself draws me repeatedly. The first time I visited the temple, I remembering standing outside her shrine, staring at her, and being so caught in the moment, that I didn’t even remember to pray. I vividly remember my mother nudging me, reminding me that this was a temple! Since then, I have visited the temple at least half a dozen times, but the same thing happens to me each and every time! Of course, these days, the crowd has increased so much that I am no longer allowed to simply stand and stare! The temple I am talking about is the Meenakshi Temple at Madurai. 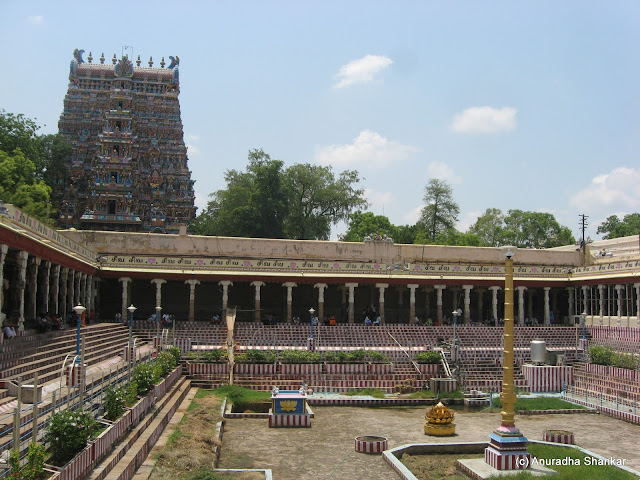 Like Kollur is synonymous with the Mookambika Temple, Madurai is synonymous with the Meenakshi Temple. However, unlike the former, the city hasn’t grown around the temple, but is much, much older. The city of Madurai was first described by Megasthenes, the Greek Ambassador to India, in the 3rd century BC. The 2500 year old city has seen rulers come and go... starting with the Pandyas and Cholas, to the Mughal invaders who demolished the original temple, to the Nayaks who restored Madurai to its former glory.

The story of Meenakshi begins and ends at Madurai. She was the daughter of the second Pandya King – Malayadhwaja, and his wife, Kanchanamala. The childless couple prayed to Lord Shiva for a child, and they were blessed with a divine daughter – the reincarnation of Parvati, destined to re-unite with Lord Shiva. She was born with three breasts – a reminder that she was divine – and it was foretold that the third breast would disappear when she met her Lord. She was named ‘Taadathagai’, but was called ‘Meenakshi’ – the one with the fish-shaped eyes. As the only child, she was loved and pampered, but also taught all the arts she would need to rule the land. She learnt to wield weapons just as well as she did the needle, and in time, took over the reins of her kingdom. While her father had ruled the land well, content with all he had, she was ambitious, and chose to extend her reign over the whole of the subcontinent. She led her army past the Deccan Peninsula to the snow covered peaks of the Himalayas, where she eventually met her divine consort – lord Shiva. It took but one glance, and her third breast melted away, showing her that it was indeed He who was her match. They were wedded in Madurai amidst great pomp and splendour, and together, settled down to rule over the whole land till it was time for them to return back to their abode in the heavens. The temple was built to commemorate the divine couple and their marriage, but it is Meenakshi who steals the show. The Lord himself acquiesced to his consort’s wishes and took on a more pleasing form than this usual one, so that he might not offend or scare her mother or the other guests. This is why he is called Sundareswarar – the handsome one!

The story of Meenakshi might be a legend... Mythology and history come together to tell us a story of love and strength – both attributes of the goddess. The story has never lost its relevance over the years though. In this day and age, while we still battle issues such as female foeticide and education of the girl child, the story of Meenakshi seems to be especially significant... Parents who happily welcomed a girl child instead of the son they sought... Who educated their beloved daughter in every possible way... Who gave her every tool she needed to be a fit queen... A queen who ruled over a vast empire and succeeded in extending its boundaries beyond anything her ancestors had envisioned... And a man who chose to please his wife and always stood behind her, rarely seen.... Is  it any wonder that such a queen and her consort have been immortalised in stone? To me, that is the charm of the temple.. the story it relates.... When I think of Meenakshi, I think of that proud woman, the woman who stood tall in a male dominated environment, the undisputed queen of her land... and pray to her to bless me with the same confidence!

As I mentioned before, the temple is huge and there are just too many things to see! Every pillar has something of interest, and in every corner or niche there is a beautiful sculpture telling us a story. I dont have many pics of the inside of the temple, since I usually avoid clicking photos inside, but here, I found myself clicking even less, since I was too busy looking in all directions at once! There is so much to see! Here are just a couple more photos from the temple....

By Air: Madurai airport is 10Km  from the city, and has direct flights connecting it to Chennai, Bangalore, Trichy and Coimbatore.

By Train: Madurai is an important railway Junction of the Southern Railway and there are frequent trains from Chennai. There are also regular trains connecting the city to the rest of the country.

By Road: With 5 major Bus Stands, Madurai is very well connected with the rest of Tamilnadu and Bangalore. There are regular AC buses from both, Bangalore (440Km) as well as Chennai (450Km).

Where to Stay: There are plenty of options for staying in Madurai, whether you are looking for 5 star resorts or budget lodges. There are also homestays and heritage stays available in and around the city.