“Madam, itna jaldi jaake kya karoge? Mandir mein aapko kuch bhi nahin milega!” ( Madam, why are you going so soon? You will find nothing in the temple now. ) were the words we heard from our driver as we drove to the Grishneshwar temple near Ellora. He had protested the day before, when we suggested leaving early, but we were adamant. We hadn’t come to Aurangabad to sleep or relax. We wanted to visit the temple and then head over to the Ellora caves and later, if possible, visit Daulatabad Fort before catching our train back to Mumbai. The driver didn’t seem to share our enthusiasm. 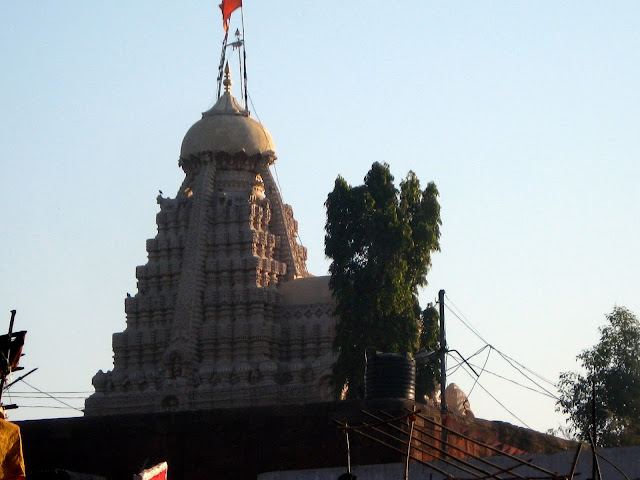 According to him, visitors to Aurangabad fell into two categories – tourists who came to visit Ajanta, Ellora and Daulatabad; and pilgrims who came to pray at Grishneshwar. The first category mostly consisted of foreigners. Of late, Indian tourists had increased, but they were clearly identifiable – young, wearing jeans, carrying huge cameras. These rarely visited the temple, and if they did, did so cursorily, without much interest. The second category were mostly Indian families, which meant more elders than youngsters, clad in Indian clothes, performing a pilgrimage to the Shiva temple, and adding a visit to the caves as an attraction for the kids. And here we were, a family, looking so typically Indian, dressed in Indian clothes, carrying puja materials, but also carrying a camera, insisting on visiting the temple, but also wanting to spend more time at the caves. He was obviously flustered, and it showed as he chattered continuously about all the people he had taken to Ajanta and Ellora. 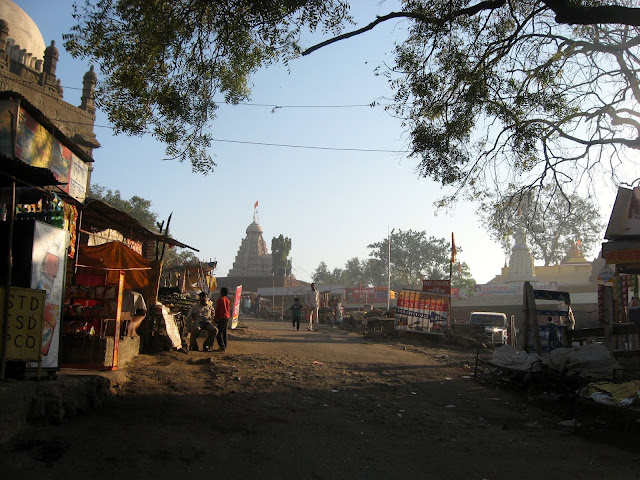 It wasn’t as early as you might imagine. It was past 7 AM, and the temple had already been open for at least an hour or more. But our driver was right. There was not a shop in sight, and neither were the pilgrims. Obviously, life began late in these parts. Of course, to us, that was a blessing. It didn't matter that we didn’t get milk to pour on the Lord or flowers to bedeck him with. All that mattered was that we didn’t have to stand in a queue or jostle with people to get into the sanctum. The sanctum itself was rather deserted – a solitary priest tried to get us to pay him some money for ‘special’ pujas, but the early hour and the absence of his normal crew seemed to have rendered him less enthusiastic than usual, and we got away much easier than we would have, a few hours hence!

Grishneshwar is the last among the Jyotirlings – the 12 super scared abodes of Lord Shiva. As with many of the shrines, this one too has multiple stories associated with it. One of the oldest legends speaks of Parvati born as a tribal woman wooing the Lord and being united with Him here. It is said that one day, as she ground vermillion and saffron with water to apply on the parting in her hair ( a symbol of the married woman), Shiva, in the form of light, appearing in her palm. This light turned into a lingam, which she called “Grishneshwar’, as it was formed by the friction (Grishna) between her finger and palm.

Another legend speaks of a devout woman, Kusuma, the wife of a learned Brahmin, Sudhama, who lived in the area. Kusuma used to form and worship a lingam each day and then immerse it in the river. Sudhama’s first wife, Sudeha, was jealous of her rival, especially since she did not have any children of her own. In a fit of jealousy, Sudeha one day drowned Kusuma’s only son. Kusuma, though racked by grief, continued her prayers as usual, and immersed the Shiva lingam in the river. Shiva appeared in front of her, and brought her son back to life. He is thus also known as Kusumeswar – the lord of Kusuma.

The temple was rebuilt in the 16th century by Maloji Bhosle and later by Ahilyabai Holkar in the 18th century. Unfortunately, photography is strictly not allowed anywhere inside the temple complex, so I can not show you anything of the temple other than the spire, that too from a distance.

Suggestions:
It is best to make a day trip from Aurangabad, covering the temple, Ellora caves, as well as Daulatabad, and  some other places of interest en route.